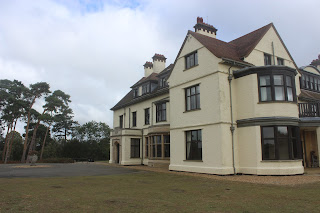 I'll be honest. What drew me into watching The Dig was also precisely what left me feeling somewhat disappointed by it - namely, a pre-existing fascination with Sutton Hoo and a familiarity with the story surrounding the excavation of its famous ship burial. The problem was undeniably that I knew too much and was unable to simply sit back, accept or ignore the fictionalised aspects of the film (and the John Preston novel from which it was adapted) and fully enjoy it.

My own interest stems from my seven year old's passion for all things archaeological, and especially Anglo-Saxon. His dream holiday destination was not Disneyland but Sutton Hoo, so when circumstances allowed at the very tail end of August last year, we booked to stay a week onsite in Mrs Pretty's home itself, with views over the burial ground. And therein lay the first irritation: the film's producers decided to use a different and much grander country pile than the (relatively) modest Tranmer House, for no apparent reason.

The Dig's central character is not landowner Mrs Pretty (a somewhat miscast Carey Mulligan) but local amateur archaeologist Basil Brown - a humble, loyal, quietly spoken and stoical man played with aplomb by Ralph Fiennes. The film sets out the case that his insightful work and dogged persistence are deserving of significant recognition - as, indeed, does the visitors' centre at Sutton Hoo and all of the National Trust literature. And yet that representation sits somewhat uncomfortably alongside his portrayal in an episode of Time Team about a Roman villa in Ipswich, in which he comes across as someone with a disorganised and damagingly cavalier approach to excavation. In The Dig, the attitude of the professionals - and Oxbridge type Charles Phillips (the excellent Ken Stott) in particular - towards Brown is presented as patronising, arrogant and snootily superior, but Time Team suggests that maybe they were right to look down their noses at his methods.

Conversely, The Dig plays down the qualifications and experience of Peggy Piggott (Lily James) in portraying her as merely the naive young wife of one of Phillips' team - something that, rather oddly, led the right-wing tabloids of all things to cry sexism. As Jamie Jeffers of British History Podcast has noted in the course of delivering a similar verdict on the film, arguably even more problematic is the erasure of Mercie Lack and Barbara Wagstaff: "It's believed that they produced the first colour photographs of an archaeological excavation in England, and thus they made history with their work. But instead of giving them their due, these two groundbreaking women were replaced by the fictional hunk-a-hunk-a-burning love, Rory."

As this implies, Rory Lomax (Johnny Flynn) and Peggy seem to feature chiefly to supply a romantic storyline, especially in view of the fact that the relationship between Brown and Mrs Pretty never goes beyond platonic, despite early hints that it might. I remain bemused by this apparent determination to shoehorn in some love interest (even to the extent that it detracts from the dig itself), as though all of the raw materials that the novelist and the screenwriter already had to work with (an archaeological discovery of enormous national significance, the clash of classes and cultures, the ominous threat of the outbreak of a Second World War) were somehow considered insufficiently dramatic and in need of embellishment.

And yet, all that said, I'm wary of sounding like one of those bores who moans about a dramatisation simply because it misrepresents real-life events, and of giving the impression that watching The Dig was nothing but an ordeal. It wasn't - far from it. Taken on its own terms as a piece of art, the film is a beautifully shot meditation on history, culture, mortality and legacy, and one that I'd happily recommend - though possibly only to those who would come to it in blissful ignorance...