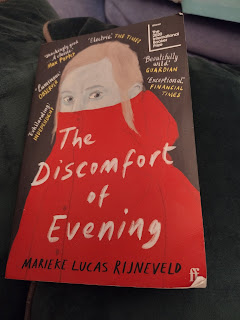 "Extraordinary" is almost certainly an overused adjective round these parts - but I make no apologies for reaching for it to describe Marieke Lucas Rijneveld's novel The Discomfort Of Evening. There's simply no other word for it - all the more so because it's the Dutch author's first foray into full-length fiction.

Judging it by its metaphorical cover, the winner of the 2020 International Booker Prize treads fairly familiar ground: the growing pains of a child narrator (ten-year-old Jas), confused by her own feelings and nascent awareness of sexuality and death; the tensions within a fractured family; the intense emotional and psychological strain experienced in the wake of personal tragedy.

But that tells only part of the story.

As finely drawn as the characters are, and as meticulously narrated as their descent into utter dysfunction is, the most remarkable thing about The Discomfort Of Evening is Rijneveld's writing. Sentences begin and you follow them, trepidatious about where they might take you, but compelled nonetheless. They twist, they turn and they end up somewhere you could never have expected. Many of the events that they describe require the reader to be of a robust constitution - not least because time and again the imagery is startlingly visceral and vivid.

Take, for instance, the following passage, about Jas' granny: "Just before she'd died, she'd made eggnog. Dad said the cream had curdled when they found her, that everything curdled when somebody died, unexpectedly or not, and for weeks I hadn't been able to sleep because I kept seeing Granny's face in her coffin, her half-opened mouth, eye sockets and pores beginning to ooze eggnog as thin as yolk."

Or this extraordinary (there I go again...) passage, which exemplifies Jas' habit of drifting into dark and surreal reverie: "For a moment I picture my father and Lien standing facing each other on the farm track, with his ears falling off like autumn leaves. We'd have to stick them back on with Pritt-stick. I'd rather put them in a little velvet box and whisper the sweetest and the most terrible words into them every night, before putting the lid back on and shaking the box so I'm sure the words have slid into the ear canal."

Rijneveld also has the knack of being able to express what feel like profound truths in novel ways. One chapter ends with Jas' observation that "Mum and Dad never cuddle; that must be because otherwise some of your secrets end up sticking to the other person, like Vaseline. That's why I never spontaneously give hugs myself - I'm not sure which secrets I want to give away."

Such passages aren't testament only to Rijneveld's skill, though. Mention must be made here of translator Michele Hutchison, whose name really should be on the front cover. To convey the richness and strangeness of the author's language must have been a significant challenge.

The novel may be a work of fiction, but it's animated with the intensity of personal experience. Like Jas, Rijneveld not only endured a strict Christian upbringing but also lost a brother in a fatal accident. Little wonder that the author's family are apparently "too frightened to read" this disturbing tale of deeply disturbed individuals.

Rijneveld has mined that personal experience for a book of poetry, Calf's Caul, too, so it will be fascinating to see what happens next, as he leaves the past behind and moves on.