Some would say that flying to a tornado-hit city during an unfolding pandemic for a not-strictly-essential work trip was a questionable decision. But I'm still glad I went to Nashville, and managed to squeeze in some sightseeing around the heavy-duty academic conferencing. 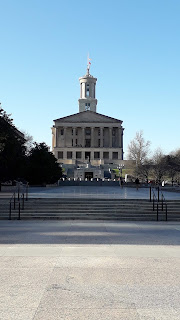 Just two nights before I arrived, entire blocks were razed out east - but the West End area, home to Vanderbilt University, and the downtown streets seem to have avoided the twister's wrath. Nevertheless, reminders were everywhere, from flags flying at half-mast to signs in shop windows declaring solidarity with those worst hit. The city has had to call upon reserves of Blitz spirit required as recently as 2010, when much of the area in and around Nashville suffered catastrophic flooding which left several dead and thousands temporarily displaced and which is currently the subject of a photography exhibition in the Conte Community Arts Gallery at Frist Art Museum. Back then, the main strip of bars was underwater thanks to its proximity to the Cumberland River, but in the wake of the tornado it was business as usual for the city's principal tourist trap - which means a good-timey country band playing in every window and a lot of whooping and hollering whatever the time of day. 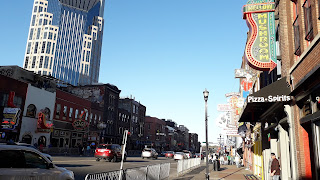 So much for Nashville's recent history. The Tennessee State Museum, an attraction that only opened its doors in October 2018 and is all the better for boasting free entry, goes much further back - as far as the formation of the landscape, the age of the dinosaurs and the arrival of the first humans. There is no attempt to peddle the outdated racist myth of the US as being a "young" country, and references to courageous, pioneering (white) explorers are entirely absent; on the contrary, the galleries quite rightly face up to the state's chequered past with regard to settler colonialism, slavery and the Civil War (and all the brutality, betrayal and exploitation that those involved). That Tennessee was subsequently a critical site of struggle during the civil rights movement of the mid-twentieth century is brought home by the images collected in a recent photobook called We Shall Overcome, published by Vanderbilt University Press in conjunction with the Frist. 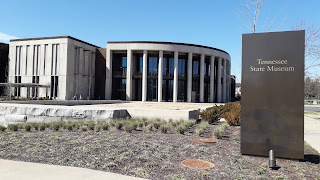 Of course, as the Tennessee State Museum's final gallery suggests, much of Nashville's international reputation is built on its rich music history. It's the sort of city where even the hotel concierge who sells you your ticket for the Musicians Hall of Fame & Museum is called James Brown. The biggest names in music are all represented there - some of them with their own miniature exhibitions (Jimi Hendrix and Johnny Cash) and often by the instruments used on recordings of classic songs and albums. However, what really makes the museum worth the $25 entrance fee is not the glossy, self-aggrandising Grammys exhibition but the way the other galleries tell the stories of the unsung backing bands who racked up hit upon hit (LA's Wrecking Crew, Detroit's Funk Brothers), the studio geniuses who captured the magic and the record labels that consistently struck gold (Motown, Stax, Sun). It's like a 3D BBC4 music documentary, and I loved it - as I did the opportunity to arse around with a drum synthesiser. Being in the thick of Viv Albertine's memoir Clothes Music Boys meant that I was very soon aware of the almost complete absence of women - but that, unfortunately, is what the industry was like (and what Albertine, in picking up a guitar rather than a microphone, found herself having to fight against). 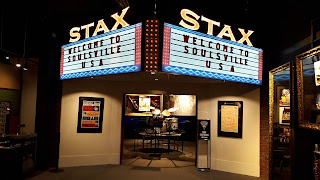 Hendrix credits time spent playing on Printer's Alley as when he really learned to master the guitar, so it was there - historically a hotbed of blues and jazz, rather than tiresome country - that we headed for some post-conference nightlife. The Bourbon Street Blues And Boogie Bar was chaotic on a Saturday night, the live band kicking out covers of pop hits to a rowdy, boozy but good-natured crowd, as bar staff slalomed around precariously balancing plastic glasses of brightly coloured cocktails on trays above their heads. I got asked for ID at the door, which goes to show that Americans have a sense of sarcasm if not of irony. 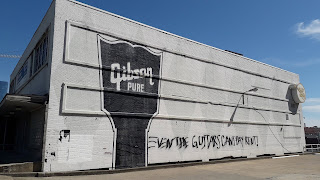 It simply wouldn't have been right not to have sampled some of the local cuisine, so I duly did so: a bowl of hearty jambalaya for my very first meal, an enormous burrito at Qdoba (an unwise choice given the need, at the time, to eat with some decorum), a pulled BBQ hog sandwich at Martin's. Incidentally, I'm also counting the gyro I had at the Farmers' Market (mostly an indoor street food mecca), given Nashville's nickname as "the Athens of the South" - earned in part because of the faintly ludicrous full-scale reconstruction of the Parthenon in Centennial Park, visible from my hotel balcony window. 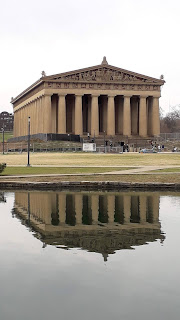 I could happily have stayed longer, strolling around under blue skies, licking barbecue sauce off my fingers, working my way through the locally brewed sour beers at Hurry Back while waiting for Best Coast and Deafheaven to turn up and play at neighbouring venue Exit/In. But with the conference over, the students coming back from Spring Break and coronavirus lockdown looking ever more likely,  returning home on a mostly empty plane was the sensible option. 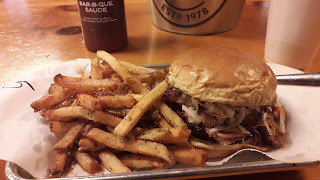