Tied to the past but looking to the future 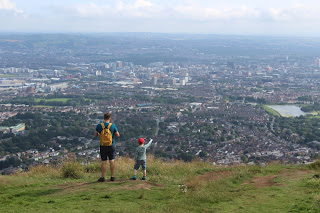 When I last visited Belfast, in 2003, it seemed at times "an unsettling place". Little wonder, really, given that the ink on the Good Friday Agreement was effectively still drying. Fifteen years later, it and the Causeway Coast topped Lonely Planet's list of places to visit around the world - and not, as we discovered, without good reason.

Back then, I described it as "a city crawling its way slowly and steadily away from the past", though still largely "not scarred or disfigured" by the rash of chain shops that had robbed mainland high streets of any unique character. Today, the "corporate ogres" have definitely conquered the heart of the Northern Irish capital - though the glassy dome of the Victoria Square shopping centre does admittedly allow a welcome panoramic view of the rooftops.

However, away from the principal shopping streets, small independent businesses are also evidently springing up and thriving. As elsewhere in the UK, many such businesses cater to the appetite and the tastebuds, and at times it felt like we were simply stumbling from one eaterie to the next in pursuit of new delights. Sunday at St George's Market in particular is a real foodie treat - I left disappointed at having only been able to squeeze in a superb Chilean beef hot pressed sandwich, a small pot of paella, some Italian orange and lavender cake, and two cups of rocket-fuel filter coffee. A couple of miles out of the centre, the street on our host's doorstep was home to assorted hipster coffee joints, a very reasonably priced gelateria, an artisan bakery specialising in an array of flavoured sourdoughs and a ramen bar voted the Best Cheap Eats in the 2018 OFM Awards and subsequently drooled over by Observer food critic Jay Rayner.

When we weren't eating or drinking, we were pottering about the Botanic Gardens admiring the newly (and expensively) refurbished Tropical Ravine and floating around the smart Ulster Museum (inevitably, I was sucked in by the Art Of Selling Songs exhibition, on tour from the V&A, while Stanley was drawn to the treasure rescued from a Spanish Armada wreck).

We did also venture out of the city - up past the castle and onto Cave Hill for an aerial view, but also significantly further afield: south to Newcastle, where the Mourne Mountains meet the sea (or so we were told - on the day, they were almost permanently shrouded in mist); north to Carrick-a-Rede (where I managed to get across the rope bridge and back), Giant's Causeway (which was just about bearable once I'd realised the potential for taking photos that look like Cold War Steve collages) and the funfair in Portrush, the town winding down after hosting the Open. 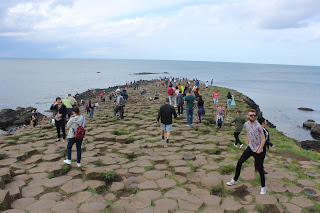 Back in Belfast, the visually striking Titanic Museum is a must-visit. The initial section of the exhibition, while rather text-heavy and congested, is nevertheless essential in establishing the historical context for the growth of shipbuilding in the city, and the construction of the Titanic herself, the events of the 14th and 15th April 1912 and the aftermath of the disaster are all powerfully conveyed through a combination of text, artifacts and audiovisuals. 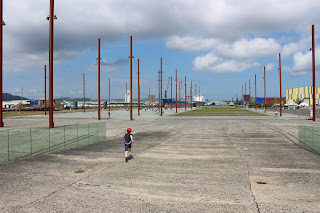 The ship was evidently a great source of local pride, as was the national and international stature of the firm that made her - so when the news broke during our stay that Harland and Wolff had collapsed into administration, it was hard not to feel the general air of despondency. No matter that the company is now foreign-owned, employs only around 120 people and built its last ship in 2003, subsequently moving into oil rig refurbishment and wind turbines - its demise is symbolic, a real blow to the city. Its bright yellow gantry cranes, Samson and Goliath, are the most iconic elements of the skyline, and their future is now in question too.

While it is to be hoped that such industrial heritage will be preserved, the same cannot be said for other visible reminders of the troubled recent past: the armoured police vans, the odd mural of machine-gun-toting men in black balaclavas declaring "Prepared for war", Union Jack flags and bunting flying from every lamp-post in rural towns, the peace wall we came across after taking a wrong turn. The Sunflower might have a vast selection of craft beers and bearded men in Slayer T-shirts whipping up wood-fired pizzas in the courtyard at the back, but it still has a security cage around the front door. As I wrote in 2003, Belfast "is still inextricably bound to what it is trying to leave behind" - something that, I think, is still true today (if perhaps to a lesser extent). 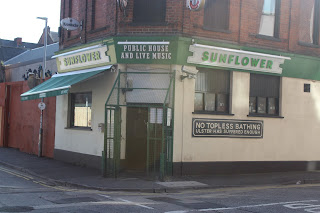 Change is in the air, though. Other pubs and businesses in the Cathedral Quarter and elsewhere were flying rainbow flags to mark Pride. Doing so in England, Scotland and Wales has become so commonplace that it's led to accusations of cynical opportunism and "rainbow capitalism"; in Northern Ireland, however, where same-sex marriage remains illegal, to fly the flag is to make a significant and potentially contentious political statement, to stick two fingers up to the DUP.

Their strenuous efforts to block the legalisation of gay marriage and opposition to abortion were among the factors that contributed to the collapse of the government. It's incredible to think that the country has effectively been rudderless for the last two years. However, if the power-sharing project can't be revived and a new Executive formed by 21st October, both same-sex marriage and abortion will become legal by default. Here's hoping. 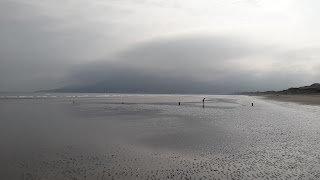