This week saw the loss of two men who, in their own indirect and very different ways, have been absolutely critical in shaping my musical tastes and experiences - neither of whom I previously knew by name.

Most obvious is Lou Ottens, the Dutch inventor of the compact cassette tape, who has died at the age of 94. As the joke doing the rounds goes, at least he got to C90.

I grew up in the cassette era - after the first vinyl boom and before CDs (in which he also had a creative hand) took over. My first music purchases were on tape, and so many of my absolute favourite bands I initially discovered and fell in love with through homemade cassette copies of classic albums: Nirvana (Nevermind), Sonic Youth (Dirty), Mogwai (Ten Rapid), Low (Secret Name), Fugazi (In On The Kill Taker) and Jane's Addiction (Ritual De Lo Habitual), to name just a few. Ottens also effectively invented the mixtape - as enjoyable to make and give as to receive, and a regular source of new delights.

I wonder what he made of the resurgence of the cassette in recent years. Perhaps he would have been bemused but also pleased that a format that once looked obsolete has actually outlived its creator.

And then there's Bill Harkin, the architect creator of Glastonbury's Pyramid Stage, who has died at the age of 83. Harkin really was a visionary in the sense that the concept apparently came to him in a dream - but the reality, first erected for the 1971 festival, was rather more prosaic, constructed out of metal scaffolding and plastic sheeting bought from the cattle market in Taunton.

Harkin's version was replaced in 1981 and is now in its third incarnation, and there wasn't even a Pyramid Stage at all on my first visit to Worthy Farm in 1998 - and yet its iconic and instantly recognisable design is just one of the things that make the festival feel so unique. A beacon in the landscape, it's played host to some of my favourite festival sets. Catching sight of its skeleton across the fields from our holiday cottage in March 2019 brought serious pangs of homesickness. Ten years away has been too long. 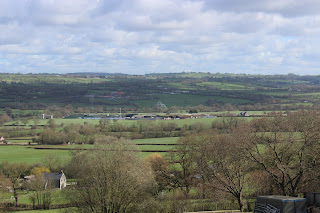