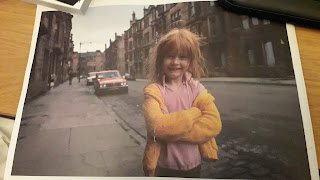 Part of the appeal of photographic portraits of cities is recognising places you know and love - but, despite growing up less than three hours away, I've somehow never been to Glasgow, so I bought a copy of Douglas Corrance's new Cafe Royal book Glasgow 1970s-1980s purely on the strength of the pictures.

In any case - unlike (say) John Bulmer's book on 1970s Manchester, also published by Cafe Royal - Corrance sought to capture the city's character not through its architecture or urban landscape but through its people: shopkeepers, football fans, marching bands, tea-drinking pensioners, protesting students.

The cover image - a young lad in the street, his face obscured by an enormous pink bubblegum bubble - is a homage to Raymond Depardon. Or at least you assume it must be, though the French photographer's pictures were taken for but never published by the Sunday Times Magazine - presumably Corrance saw them at some point.

The bubble brings colour to the otherwise almost monochrome scene, seeming to serve a purpose. For Depardon, Glasgow in the early 1980s was not grim but "exotic", and Corrance too portrays it as a vibrant and colourful place (if a little rough around the edges).

Arguably most revealing is the choice of centre spread: a ginger-haired girl in pink sweatshirt and mustard cardigan, grinning directly at the camera, stood in a tenement-lined street. "I hate snotty-nosed pictures of street kids," Corrance told the Guardian's Tim Adams. "That wasn't the reality. Those tenement streets had a bad name, but as buildings, the Glasgow tenement was one of the finest designs ever made for city living. And they just pulled most of them down." Suffice to say he has a very different perspective on them than fellow photographer Nick Hedges.