The times they were a-changin'

In his recent contribution to the Offline Essays series, Sites Of Struggle And Photography, Paul Cabuts commented that "photographs are a great way for us to engage with our social history" - a view that should be abundantly obvious, you would hope, but one that is certainly borne out by Bulmer and Killip's books.

As Raymond Depardon did in Glasgow a few years later, Bulmer captured "a city that has disappeared": women in housecoats and slippers sweeping rubbish into the gutter, the organised chaos of overstocked Open All Hours-style local shops staffed by stern-faced men with moustaches, kids playing on boarded-up streets, semi-demolished industrial buildings (back when they were simply swept away rather than converted into upmarket apartments). As in Depardon's pictures, there are occasional flashes of colour amid the gloom, but these are muted, and the key image starkly juxtaposes an advertiser's idealised vision with the grim reality. Not especially subtle, but enormously effective. 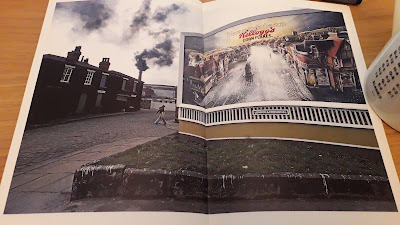 As the self-confessed (if inadvertent) "photographer of the English de-Industrial Revolution", Killip, meanwhile, documented not a city that has disappeared but an industry in the process of disappearing - and, crucially, the devastating impact of that disappearance on the local community and landscape. For this reason, the images of the ships under construction (staggering though the scale of those vessels is) are not the most striking thing about the book; on the contrary, it's the way that it's bookended by pictures of the same street less than two years apart - snow-covered and almost chocolate-boxy in the first, abandoned and derelict in the second. "Prepare for revolution" reads the graffiti on the wall - nothing, unfortunately, could prepare Wallsend and South Shields for the loss of their lifeblood. 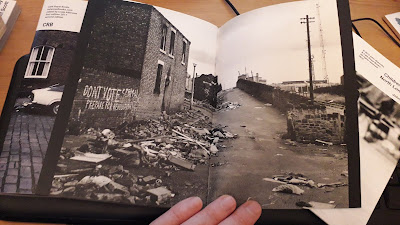