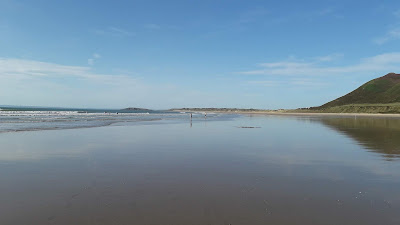 A second summer holiday spent less than two hours from home and, like the first (in Hay-on-Wye), our August week on the Gower genuinely couldn't have been much better.

The gorgeous scenery and spectacular beaches were a given, but the weather wasn't; thankfully, it turned out to be largely clement - indeed more than merely clement over the Bank Holiday weekend - and so the sea was more like a tepid bath than a quick route to hypothermia.

The climatic conditions meant that committing to a further seven nights under canvas immediately after four at Green Man proved not to be pure folly; on the contrary, perhaps for the first time ever I actually began to enjoy camping.

As you might expect given its proximity to Cardiff, we weren't unfamiliar with the Gower beforehand, but nevertheless did make two significant discoveries over the course of the week:

1. The Gower Heritage Centre in Parkmill is a superbly eccentric and thoroughly British throwback to the visitor attractions of my childhood - a mixture of the informative, the curious and the slightly naff, all held together by the evident enthusiasm and dedication of the staff (not least Ian the blacksmith, who also played the part of corn mill tour guide, puppet theatre actor/director and master of ceremonies at the duck race). One minute you're sampling medieval pottage, the next you're in a mocked-up air-raid shelter, the next you're strolling around a duck pond surrounded with antique lawnmowers, still bemused by the fact that your entry fee included a full English - well, Welsh - breakfast and a hot drink.

2. The Little Valley Bakery, situated in a barn just outside the Centre (opposite La Charrette, Wales' smallest cinema), was responsible for what many of our party said were the finest sausage rolls they'd ever tasted - a major compliment, given that some of them would consider themselves serious aficionados. If ever I'm asked to think of a happy place, it'll probably now be Rhossili Bay, enjoying a post-dip bask in the Bank Holiday sunshine and tucking into some of the best baked comestibles money can buy.
Posted by Ben at 10:31 AM