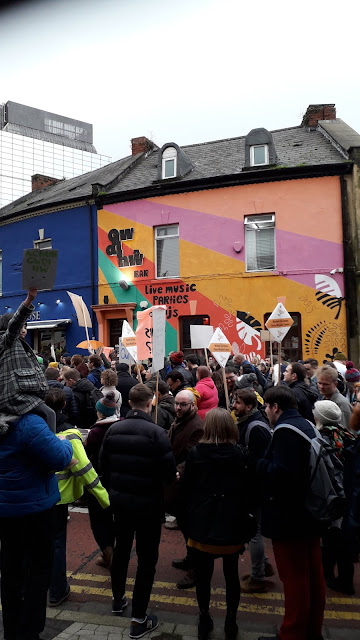 Battling against a horrible combination of hangover and illness, I managed to make it along to the Save Guildford Crescent protest march today - and I'm proud to have been a part of an astonishing turnout.

Personally speaking, it was the fate of bar/venue Gwdihw that drew me to get involved. As campaign organiser Minty made clear in his impassioned address to the crowd, Cardiff's music scene is thriving, and, with Buffalo already gone, the city can hardly afford to lose another grassroots space. Tali Kallstrom spoke about how it was the first place to give Estrons a stage, and it's also where Boy Azooga signed their record deal. (The latter's Davey Newington has performed as part of this evening's post-march gig, with fellow marchers Gruff Rhys and Buzzard Buzzard Buzzard also on the bill.)

The campaign isn't just about Gwdihw, though. The premises of its next-door neighbours, restaurants Thai House and Madeira, are also in line for demolition. Both are family-run businesses that have been on the site for more than 20 years. Tamsin Ramasut, owner of Thai House (now the oldest Thai restaurant in the UK), talked of the difficulties of running an independent business and the painful process of having to hand out redundancy notices to staff who've become more like members of the family.

And then there's the architectural and historical value of preserving the buildings themselves, which have stood since the 1860s and (as Minty pointed out) aged much better than the modern eyesores that surround them: the Ibis hotel, the Motorpoint Arena, the offices of landlords/owners the Rapport family.

Yesterday, with rather suspicious timing, it was announced that the Rapports had agreed to give the terrace a three-month stay of execution while Cardiff Council's "masterplan" for the area is given due consideration. But nowhere in the statement were the affected businesses mentioned, suggesting that they will still be forced out - and, of course, already vacated buildings are easier to bulldoze. Indeed, even if the leases were to be extended for that three-month period (as council leader Huw Thomas hopes might happen), Gwdihw's James Chant admitted that it would probably be too little too late - and too much work and effort to stay put. As a result, they're already fearing the worst and working on Plan B.

Minty wrapped up the speeches by urging us to further action over the coming days, weeks and months (including writing to the Rapports to express our views), but the signs are that this specific campaign may well end in defeat - at least as far as the businesses are concerned. However, as became apparent, the march was also about something bigger. Whether the battle to save Guildford Crescent is won or lost, there is a strong will and determination to fight a wider war - the war to protect the colour and character that independent businesses and gig venues bring to the city centre more generally, and to stand up to the threat of cultural and architectural vandalism posed by insensitive property developers and money men.
Posted by Ben at 11:43 PM