9am
It's already excruciatingly hot in the tent. I'm reminded of Warren Ellis' anecdote at ATP - this must have been what he meant when describing nearly being "cooked like a fucking hotdog". Thankfully I had the foresight to have water on hand.

9.30am
Ah, yes, the other con of the prevailing conditions: the occasional waft of shit from the toilets.

10am
Another new T-shirt slogan is born: "I adhere to the three song rule". "Yes", agrees Suresh snarkily, "once you've seen three songs then that allows you to become a fascist music writer and diss bands on your blog". Can't think who he might be talking about.

10.30am
Time to assess last night's damage. Sunglasses: lost. Jeans: what were previously a couple of small "ventilation" holes are now one single gaping abyss in the crotch. Best not wear them again for fear of indecent exposure.

11.30am
We work out that Martin's tent - originally purple but now pale lilac fading to white, and patched up all over with tape - is now a veteran of a phenomenal 27 festivals. 27: the age of rock 'n' roll death. Will it survive? 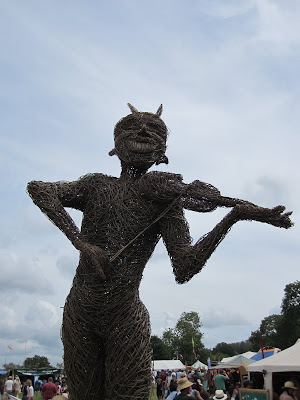 1.45pm
Up at the Stone Circle, an early contender for the best T-shirt of the day: "Meat is murder - tasty, tasty murder". Dan, who has opted to camp at the back of the Pyramid Stage field rather than with us on Pennard Hill, ruefully recounts how an unwelcome visitor came into his tent at night and lightened his wallet to the tune of £200. When he went to report the theft to the police this morning, he discovered he wasn't alone - could the crime rate be creeping back up again?

2.15pm
Daf is speaking fondly of his time working on reception at the BBC in Cardiff - about getting to play Pudsey Bear on tour, and about the woman who came in claiming she'd found the Holy Grail by the River Taff near Tesco. 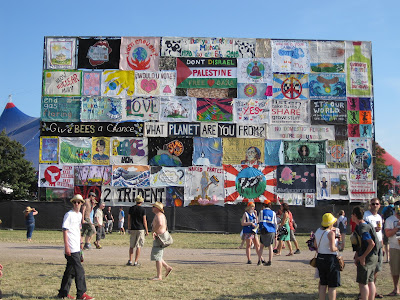 2.30pm
Admiring a climbing wall, Suresh turns round to discover himself five metres away from Prince Charles, who has just stepped out of a Range Rover with Michael Eavis, and has to swear to himself that he's not on anything. A clutch of lads spot our future monarch, one excitedly suggesting: "Lets' egg 'im!". How nervous and horrified his chief of security and bodyguards must have been when he announced he was going to go for a walkabout at Glastonbury...

3pm
In recent years Thursday seems to have become the day for moseying on down to the West Holts Field (formerly the Jazz World) for a Pieminister. A noble tradition, I conclude, as I tuck into my Chicken of Aragon - the trusty favourite chosen above two new flavours, Mean Bean and Henny Penny. The staff are all wearing T-shirts which read "Keep calm and eat more pies", the crown of the original poster having morphed into a steaming pie - a nice touch. 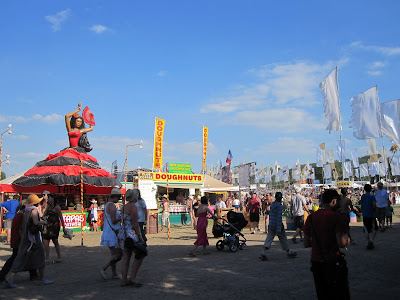 4.30pm
In the West Holts Bar, in the company of Suresh and a rowdy host of his compatriots, we become honorary New Zealanders, vociferously cheering on the Kiwis in their final group stage match. Opponents Paraguay, meanwhile, are backed by one small boy who, his mum explains, drew the South Americans in the school sweepstake. In the end, everyone's relatively happy with the 0-0 draw: Paraguay progress and, though they don't qualify for the knock-out phase, New Zealand not only end the World Cup unbeaten but finish above reigning champions Italy.

5pm
Dan is bemused to discover a girl accidentally pouring Pimms into his pint because she thought it was empty. The resulting concoction doesn't taste too bad, apparently.

6pm
A snake of beer pots - and we're talking anaconda or python here, not grass snake - weaves its way among the punters strewn out in the sunshine. 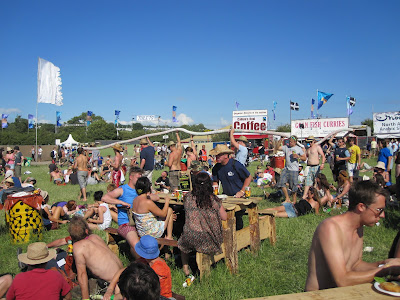 7pm
Dan, a founder member of WASI (the Welsh Aeronautic and Space Institute), is explaining and defending his organisation's plans to launch a high-altitude balloon in the face of Suresh's continued scepticism. If successful, might it spark a new international space race?

8pm
Now we're honorary Japan fans, looking on admiringly as two splendid free-kicks set them up for victory over Denmark and qualification from Group E. Surely they can't be playing with the Jabulani ball that everyone's been complaining about?

8.15pm
A sticker in the toilets urges us to go and see political folk band Seize The Day. Someone's grafittied response? "I'd rather be tit-wanked to death by your gran". That'd be a no, then. 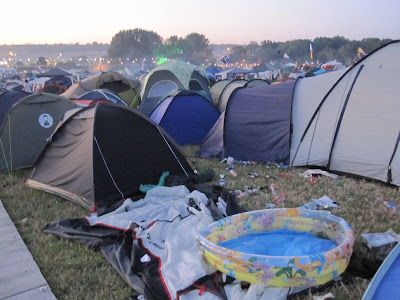 9.30pm
It transpires that the cafe a stone's throw from our tents will do you a 12" margherita pizza with extra peppers for just £6 - marvellous. And the coffee's good too.

11pm
Back to the Stone Circle, soundtracked as is usual when night falls by excited chatter and the occasional whoosh of nitrous oxide (£3 a hit for approximately ten seconds of buzz, apparently). We breach Festival Fire Etiquette by gatecrashing someone else's - a couple who've just got engaged.

1am
It's all a bit quieter and more restrained at Stonebridge Bar in the Park. We're sat down and somehow the conversation has drifted onto the vagaries of body hair. Why does it grow in random places on men? And what evolutionary reason does it serve? Answers on a postcard.

2am
We attempt to start a fire but everything is damp with dew. Adam and Alison roll up, and I succumb to the lure of Shangri La.

2.45am
The three of us have just about made it to the railway track when the decision is taken to abort the mission on the grounds of imbalance issues (not mine). Probably for the best.

3.15am
Climbing into my sleeping bag, I find my lost shades, tucked in a random bag in a corner of the tent. Presumably it was a logical place to put them at the time...
Posted by Ben at 2:01 AM