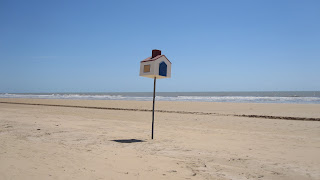 So we're back from our fortnight in la France, but don't expect the sort of substantial holiday report posted last time we ventured across la Manche, back in 2009. The reason for that is simple, and it's not the weather (mixed though it was). I'll give you a clue: he's eleven weeks old and calls us mum and dad (or would if he was just a bit more precocious)...

Yes, Stan meant a very different type of holiday: quiet and lazy rather than busy and action-packed, few day trips and no meals out. Despite being in the Vendee, we didn't even make it into the sea, or onto a beach for more than about half an hour. Arguably the most exciting thing we did was bravely running the gauntlet of the Corridor of Hell - though even that sounds less exhilarating when I reveal it amounted to little more than a pathway between a handful of toxic plants at the Jardin des Olfacties.

No, it was all about simple pleasures: spending quality time with Stan, watching him learn how to grasp, taking him for his first swim, a couple of hours spent on a terrace seat shaded from the heat of the late morning sun with a contentedly sleeping baby, a grand cafe creme and a good book.

Given that, by the time we left the UK, our main objective was not to explore a new and unfamiliar part of France but to beef up the boy on doctor's orders, then it was a definite case of mission accomplished, the prodigal son returning home fatted. (Oddly enough, it seems to have gone largely to his fingers.) Less welcome, however, was the fact that his parents' waistlines also expanded due to a diet of brie and patisserie-baked comestibles and a lax exercise regime that consisted solely of the occasional lounge about in the pool and the nightly pushchair circumambulations of the site trying to get Stan to accept that sleep might be a sound idea.

I was also mildly alarmed to discover that I appear to have morphed into the sort of person who has manchat with other dads on French campsites. When did that happen? Ho hum. Perhaps I should just be resigned to my fate. C'est la vie, as the French are fond of saying.

In other news, there was apparently some festival or other in Somerset on while we were away.
Posted by Ben at 11:23 PM

aah Ben.. congratulations (ridiculously belated, sorry, I've not been following even my favourite blogs anywhere near enough) to you and Jen on the arrival of young Stan (fantastic name by the way, gloriously reminiscent of late 50s half back lines). And yes I should think you should resign yourself to the fate of campsite manchat, it's not all bad... and if the blog becomes a blow-by-blow diary of early-days parenthood then no bad thing either.. your French holiday post is already reminiscent of Crinklybee nine years ago I think, which is funny thinking that SWSL was part of what started me blogging back then.. you should know you are making me quite nostalgic for those sleepless nights, ridiculous though that no doubt seems! Really happy for you both. Jonathan xx

Thanks Jonathan - that's very kind of you to say, much appreciated! SWSL isn't about to become a baby diary, though the odd post is creeping in here and there! We're not actually suffering from too many sleepless nights, thankfully - he's been a good nighttime sleeper for weeks, though is rather more reluctant to give Jen time to do anything through the day... I know what you mean about other blogs - it's shameful how little I read these days. Hope your own clan are well and look forward to hooking up in Manchester again at some point.