Art and the aristocrats 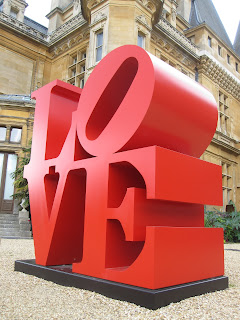 If you're seeking out works of contemporary sculpture from the likes of Antony Gormley and Ai Wei Wei, then you'd assume you'd be much better off paying a visit to Tate Modern, White Cube or the Saatchi Gallery than to a strikingly imposing neo-Renaissance manor house in rural Buckinghamshire. You'd be mistaken, though - or at least you would be for the duration of Waddesdon Manor's current exhibition.

House Of Cards was inspired by manor owners the Rothschilds' purchase of an eighteenth-century portrait of a boy constructing a house of cards - loosely, it has to be said, though there are few complaints to be made on that score given the stature of artists represented. Part of the exhibits' power comes from their apparently incongruous setting - not least Urs Fisher's surrealist sculpture Bad Timing, Lamb Chop!, a gigantic wooden chair bisected by a cigarette packet, which sits on the manicured lawns with the manor an impressive backdrop.

Not everything does much for me (Richard Serra's  House of Cards - a cluster of rusty metal panels leaning on each other for support; Donald Judd's Untitled 1979 - essentially a postmodern shelving unit), but highlights include Wim Delvoye's Flatbed Trailer, a large truck and cement mixer crafted in Gothic-style rust-red steel filigree which is afforded its own natural plinth; Robert Indiana's iconic "sculptural poem" entitled Love; and Anish Kapoor's Untitled, the polished concave surfaces of which act like a strange kind of mirror.

Though the outdoor context provides great opportunity for intriguing juxtapositions, some of the best exhibits are actually indoors. Jeff Koons' Aqualung, cast ironically in bronze, has a refreshing wit that several other pieces lack, and while the exhibition offers the opportunity to see a classic work from the UK's most well-known contemporary artist, Damien Hirst (the slow-motion porcine dissection of 1996's This Little Piggy Went To Market, This Little Piggy Stayed At Home), I preferred the vast and very well-stocked medicine cabinet of Lullaby Winter - simultaneously a positive comment on our creative ingenuity in counteracting natural illness and disease, and a negative reflection on our dependency on (and indeed regular addiction to) pharmaceutical products. If nothing else, it would make a superb cover for a Spiritualized album...
Posted by Ben at 4:53 PM