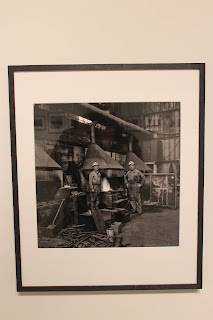 Few photography exhibitions can have found a more suitable temporary home than Mik Critchlow's Coal Town. Images from Woodhorn Colliery feature prominently; the site, now a museum, has a permanent exhibition about life in Ashington (dubbed "Coal Town") downstairs and a gallery of work by members of the Ashington Group (popularly known as the Pitmen Painters) next door; and Critchlow's grandfather worked as a miner at Woodhorn for more than half a century.

This personal connection between photographer and subject matter is critical. What is striking about the photo Martin Parr took at Tower Colliery in Glamorgan in 1993 is the incongruity of the glum, blackened miner sat on a plastic chair at a formica table, grubby fingerprints on his white mug, surrounded by a cheap and tatty Christmas decorations. There is a sense of humour at play, but not one that's shared by the photo's subject; while not necessarily poking fun, Parr remains a detached observer. Critchlow, by contrast, has followed the author's dictum "Write about what you know", taking pictures of the people, places and scenes familiar to him over the past few decades. The result is intimacy, not distance; empathy, not detachment.

Gallery 1 throws the visitor a bit of a curveball in its focus on life above ground - touring Ashington's streets and businesses of the 1970s and 1980s, and illustrating leisure pursuits that have become the stuff of Northern stereotypes (whippet racing, pigeon fancying, brass bands) with sympathy rather than scorn. The effect is to ensure that the exhibition is a portrait of the whole community, not just the miners, and of people at play as well as at work.

Similar scenes can be found in the work of the Pitmen Painters, a key source of inspiration to Critchlow (as was Henri Cartier-Bresson). There, whatever the foreground focus, the winding tower is practically ubiquitous in the background, a perpetual reminder of where we are; in Critchlow's photos, the tower isn't always visible, but you know it's there. The pit was indeed the "mother of the village", giving life to everything.

This isn't the only time that Every Valley, Public Service Broadcasting's LP about the Welsh mining industry, comes to mind. The image of a bunch of miners coming off shift at Ashington Colliery, taken from the foot of an open-air staircase looking up, seems to cast them as rock stars descending from a private jet, ready to conquer the world, and I can hear Richard Burton's words from the album's title track: "the arrogant strut of the lords of the coal face". 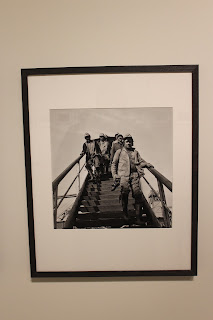 The portraits in Gallery 2 don't generally depict "kings of the underworld", though; on the contrary, most of the miners appear world-weary and stoical, if quietly dignified. There is a danger (especially for middle-class chin-strokers like myself) of romanticising this lost world of community spirit and collaborative endeavour. These images serve as a powerful reminder that the work was extremely hard (as well as poorly paid) and took a heavy toll on health and wellbeing. Living and breathing coal was not good for the lungs.

And yet there is - perhaps inevitably - an elegiac tone to the last few images in the exhibition. When the mother of the village died (as Woodhorn did in 1981), much more died too. The photo of a pile of discarded work clothes from the final shift at the colliery has a particular poignancy, symbolising the way in which the town and indeed the whole region shed their identity almost overnight - or, to be more precise, were stripped of it.

The old winding wheel may have stopped turning and become something for children to play on, as in the final photo, but - like the museum where it's currently on display - Coal Town helps to preserve a past that is gone but will not be forgotten. 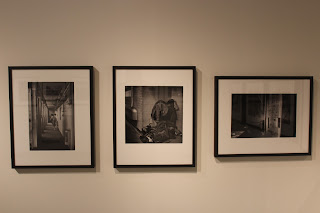