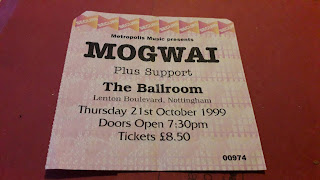 Massive congratulations to Mogwai for scoring a UK #1 album. Not words I ever thought I'd type, to be honest - certainly not when I first encountered them, at the Marcus Garvey Ballroom 22 years ago, when 'Like Herod' terrified anyone of a nervous disposition and the wooden dancefloor vibrated like there was an earthquake during 'Mogwai Fear Satan'.

Nice to contribute to the good guys winning for once, having ordered a CD copy from Spillers - as the Guardian point out, it was the Official Charts Company's valuation of physical sales over streams that meant As The Love Continues finished above Conflict Of Interest.

The latter's creator, MC Ghetts, took to the streets of London in a tank in a bid to boost sales. It's a promotional strategy that might have been recommended to Mogwai by old friend Gruff Rhys of Super Furry Animals, but instead they went down the more conventional route of amassing a groundswell of support online. In these fuckawful times, it's been heartening not only to have a new Mogwai record to enjoy but to see so much love for them on social media, with Low, The Cure, Warren Ellis, Arab Strap, Alex Kapranos, Blanck Mass, Manic Street Preachers, Limmy and even Elijah Wood backing what ultimately turned out to be a successful bid for the top spot.

Even those with whom they've had less cordial relations over the years have sent their best wishes. Credit to Damon Albarn for rising above those infamous "Blur: Are Shite" T-shirts and congratulating the band on this most improbable of achievements.