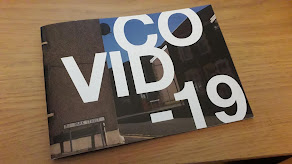 Coronavirus lockdown restrictions had a profound impact on many - if not most - photographers. With international travel curtailed, the countryside largely off-limits, events cancelled and intimate interpersonal contact forbidden, best-laid plans and work-in-progress projects had to be shelved, and a shift of focus was needed. As was underlined by a Guardian feature published in May, not all were disheartened. On the contrary, for some, this presented an opportunity to experiment and innovate, while for others it was revelatory in bringing them to a more sensitive appreciation of their immediate surroundings.

By contrast, Jon Pountney barely had to break stride, immersed as he already was in documenting the world outside his window. I reported on his Treforest/Pontypridd-based lockdown project back in June, and now he's joined a number of other Welsh photographers in self-publishing his pictures in zine format.

To a large extent, it feels as though the publication simply picks up where his Chapter exhibition Waiting For The Light left off - most obviously in the way in which natural light suffuses and enriches the relatively mundane scenes he shoots (fence panels and garage roofs, the underside of bridges, the forlorn and mangled skeleton of a shopping trolley rusting in a river), but also in the images' depiction of a manmade landscape devoid of people.

As Pountney wrote in his diary, "There are still people here. But they just can't be seen." That comment reappears at the heart of the book's introduction, and it's true that while humans are absent, signs of humanity are abundant. For instance, a lost jacket dangling from the branch of a leafy tree serves to symbolise both how we use and impose ourselves on the natural environment and how, this year, we have largely had to hang up our coats and stay indoors.

As commonplace as some of the scenes are, there are also hints that we have been (and indeed still are) living through extraordinary times: a roadside religious shrine rather comically cordoned off with green tape and traffic cones; a wall-mounted postbox whose "OUT OF SERVICE" message resonates with deeper meaning; the warning "Keep out or COVID will get you and you will die" scrawled chillingly in chalk in a child's hand on a sunlit wooden gate.

In one image, billboards stand empty except for the tattered remnants of old posters, a symbol of the profound disruption that the virus has caused to the machinery of global capitalism - but also, given that "Brexit" is about the only word the viewer can make out, a reminder that a desperate situation may yet get worse and that as a nation we are on the verge of self-isolation out of choice.

However, collectively Pountney's pictures do not depict a 28 Days Later/The Road-style hellscape; neither are they suggestive of a photographer who harbours the sort of anti-humanist "nature is healing" fantasy couched in environmentalist terms criticised by Luke Turner. Towards the end of the book, human figures start to appear: a masked man stood with his back to the camera, viewed through the railings of a metal fence; hoodied teens spied across a grassy hillock; the soles of a pair of crossed feet belonging to a sofa-lounger, seen through a street-level window. Perhaps most significant is an over-the-wall shot of a family's backyard barbecue, which suggests that for many of us (though, admittedly, certainly not all) invaluable human social interaction has continued in confinement, behind closed doors and beyond the prying eye of the camera lens.

The final image - of a shop window sign - is particularly powerful. "We are closed", it reads, before adding "We will see you soon." An unremarkable cliche, perhaps - but in the context of the collection, and at a time when we've been plunged back into lockdown, one that offers confident and comforting reassurance of the repopulation of public spaces and the return of normality.