Burger me they're good 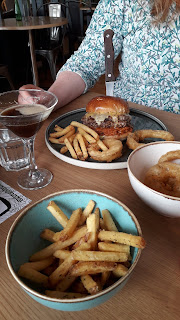 The problem with being a parent of a young(ish) child and following a bunch of local food bloggers on Twitter is that you're always hungry, constantly confronted with images of amazing-looking dishes being served up on your doorstep, but agonisingly aware that you'll only very rarely get the chance to actually sample them for yourself. So, when the opportunity does present itself, you have to be sure to seize it with both hands.

As soon as I realised we'd be in the Brecon Beacons for a long weekend at the end of April, I knew I simply had to engineer a Friday lunchtime visit to HILLS. Suffice to say we weren't disappointed.

Rather like Spit & Sawdust, it's a burger joint in an unlikely location - next to a campsite on the outskirts of Brecon - and the sort of place that depends on word-of-mouth recommendations (and rabidly enthusiastic food blogger reviews) rather than passing trade. As it turns out, the location is one of its key selling points, with the large windows offering amazing views of Pen Y Fan, Corn Du and friends even on a changeable day.

While proximity means that it does cater for those committed to spending the night in a caravan or under canvas, HILLS is certainly a lot more upmarket than that might imply. The decor is smart and stylish, and Jen can vouch for the quality of the cocktail menu (she kicked off with an excellent espresso martini).

A big appetite is essential, given that a double patty comes as standard. Jen devoured her Mexican chicken with indecent speed and, despite being listed in the "Classics" section of the menu, my New York was a fresh twist, coming with a layer of pastrami and (best of all) sauerkraut providing all of the crunch of iceberg lettuce but contributing far more in terms of flavour. The onion rings were excellent, the skin-on fries liberally sprinkled with rosemary salt were perfection and Stanley's kids' meal - cheeseburger, chips, miniature copper saucepan of beans, followed by locally made ice cream - was superb value.

HILLS claim to serve up the best burgers in Wales - and on the strength of one visit it's hard to imagine anyone else bettering them.

However, you don't have to leave Cardiff in pursuit of a better-than-decent burger, though, as Bwydiful have proved. The need for quick sustenance before a gig at Clwb earlier this month prompted a first trip to Sticky Fingers. Situated within the building formerly occupied by Chiquitos within the Old Brewery Quarter, it's a cross between a food court and a street food market, giving fledgling and small-scale pop-up restaurants the opportunity to take up semi-permanent residence right in the city centre.

Mr Croquewich has moved out (temporarily?), but that's handed a space to vegetarian specialists Dirt, while seafood, filled pizza dough and Malaysian dishes were also on offer courtesy of The Two Anchors, The Original Goodfillas Company and Makasih respectively.

There was only ever going to be one place for me to start, though, and that was at Hoof. The Mighty Hoof, complete with bacon and liver pate, sounded like gout in a bun and though the beef ragu in the Dirty Hoof offered brief temptation, the fiery promise of the Sweaty Hoof's pickled chilli and nduja mayo was just too appealing to resist. Like HILLS, Hoof have the good taste to use Alex Gooch buns - and they score bonus points for toasting them in beef dripping, clearly of the opinion that bread isn't sufficiently meaty.

There could perhaps have been a bit more burger for my buck, and the service system was somewhat chaotic (admittedly during the street food equivalent of rush hour) - but it all worked out fine in the end and there was certainly no disputing the quality of the components or the care with which they were put together.

By all means go to Five Guys around the corner if you're in need of a £5 milkshake to lob at a fascist, but if it's a burger you're after, hot-foot it to Hoof.
Posted by Ben at 10:05 AM