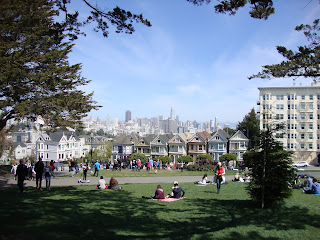 Visiting San Francisco last year to mark the fiftieth anniversary of the Summer of Love, the Guardian's Caroline Eden concluded: "The spirit of the Summer of Love does appear to linger in this city. Despite the vast and obvious inequalities - which some say are steadily worsening - San Francisco feels like a flexible and creative city, somewhere that is still capable of opening minds." After spending a week there, I'd agree.

That spirit does indeed linger, literally as well as metaphorically in the scent of weed, which is everywhere - and not just in Haight Ashbury. Cops are largely indifferent, strolling past crowds outside smoke shops making swift use of their latest purchases. Indeed, when I was offered a toke on a joint by a grizzled old hippie at a psych rock show in a converted church down in the Mission District (review to come), it felt like Peak San Francisco, and as though 1967 never ended.

From a more cynical perspective, though, that's nothing to be celebrated. You could argue that the Summer of Love lives on primarily thanks to the various shops lining Haight Street, which reductively preserve hippie culture in the form of ubiquitous tie-dye prints and trashy knick-knacks. That a movement resolutely opposed to capitalist tendencies should have become so co-opted and commodified is ironic but also, in truth, inevitable. In some ways, the street is arguably as much a tourist destination as the Americanised Blackpool that is Pier 39. 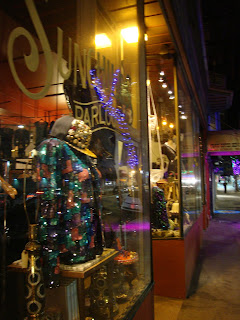 Elsewhere, too, is evidence of "the vast and obvious inequalities" of which Eden writes. She comments on "the alarmingly drug-addled streets of the Tenderloin"; true enough, though I also saw someone shooting up in broad daylight in the middle of the Financial District and, leaving a swanky hotel two blocks from the downtown hub that is Union Square, was offered crack. It was enough to send this liberal leftie into a bit of a spin: permanently on edge, and infuriated at myself for feeling that way.

The very visible prevalence of hard drugs and homelessness underlines the consequences of a wholly inadequate social welfare safety net. In fact, many of those who do have a place to call home find themselves in an increasingly precarious position; in the wake of rising rents due to gentrification and the effects of the ongoing dotcom revolution, eviction is an ever-present threat. Reaching the rather bleak-seeming Ocean Beach out west on a dull afternoon my final full day in the city, I couldn't help but stare out at the Pacific and think of On The Beach, Neil Young's dark rumination on the souring and death of the hippie dream. 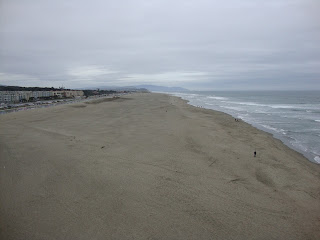 And yet, as Eden intimated, that dream isn't totally dead. San Francisco can also boast Golden Gate Park, an enormous green space stretching from Sanyan Street right out to Ocean Beach and home to (for instance) the Garden of Humanitarians and the National AIDS Memorial Grove. The Castro District, in particular, remains a place where LGBTQ identity is not merely tolerated but actively celebrated (something that made the city a perfect choice of location for the IFJP conference that I was there to attend). San Francisco's numerous excellent bookshops - most notably Lawrence Ferlinghetti's famous City Lights on Columbus Avenue, the nearby Beat Museum on Broadway, Dog Eared Books in the Mission District, and Booksmith and the anarchist store Bound Together on Haight - are all helping to keep the city's radical past alive through the enthusiastic dissemination of ideas that challenge neoliberal norms and social mores. 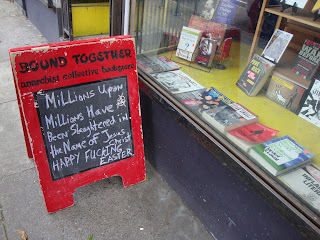 San Francisco's liberal, inclusive tendencies are evident everywhere, even in the posters stuck in corner-shop windows. The city isn't a utopia and is subject to wider social, economic and political forces, but here's hoping that under Trump's presidency it proves to be not an outlier but a guiding light. Hippie idealism may be problematic in many ways, but in the current climate there's still much to be said for its central tenets of peace, love and understanding. 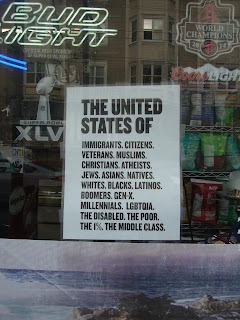