Well, now - this is embarrassing. Not only is the 2011 Nightmare Before Christmas just over a week away, making last year's bash a whole 51 weeks ago, but I must confess to having mislaid my notes. All of which means that the write-up of an extraordinarily eclectic final day which follows is necessarily brief, patchy and cobbled together from increasingly vague memory...

12.30pm
MARISSA NADLER (Reds) has been described as having the voice of a Siren - and indeed she does, one which intertwines with her hypnotic, tranquillising strumming to drown the listener in literally unfathomable depths of watery woe. And we stand open-mouthed, not struggling, resigned to our fate at the hands of a folk-gothic goddess, an alabaster queen. Haunting doesn't even come close. 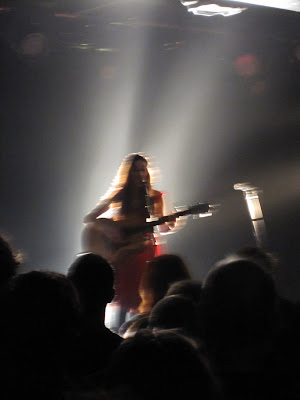 2pm
Will it be second time lucky for Chris Corsano? Might he succeed with RANGDA (Centre Stage) where he failed with Flower/Corsano Duo yesterday, and stumble upon something musically memorable? Well, this time the improv's an improvement, in the company of two guitarists - one of whom is Ben Chasny, psych-rock lynchpin of Six Organs Of Admittance and Comets On Fire - but it's still not much to write home about, even if I was to want to send my mother a postcard detailing goings-on at a leftfield music festival held in Butlins at Minehead in December.

4pm
After the England v Germany debacle that blighted the Sunday at Glastonbury, I vowed "never again will football come between me and music at a festival". So why exactly is it that I'm sat in the sports bar allowing a Newcastle display so inept that it will bring an end to our manager's tenure to distract me from the business at hand? (Namely Godspeed!'s matinee set, later reported to be their best of the weekend.)

5.30pm
Has time mellowed and soothed COUNTRY TEASERS (Reds), the rambunctious, obnoxious, barely musically literate, art-punk provocateurs I saw supporting Sebadoh in 1999, who claim to be peddling a new sound, the "Boston toe-toe rush"? No. Which would be fine if the real deal, The Fall, weren't still active and indeed in rude good health.

7.30pm
Ah, the Centre Stage proves a refuge for those of us looking for a semblance of order and coherence, even if NEUROSIS's malevolent sludge threatens to pop your skull like a cheap balloon. To these uninitiated ears the Californians' second set of the weekend seems much the same as the first, brutal in its intensity and unforgiving in its volume, but with the addition of what I later learn is 'Through Silver In Blood' at the end, complete with skin-bludgeoning so fierce it might waken the dead. 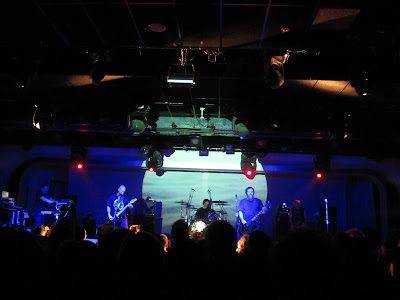 9.30pm
And so to the weekend's real curveball. Not content with showing they HAVE got a sense of humour, actually, with that joke bio in the programme, Godspeed! have only gone and invited WEIRD AL YANKOVIC (Pavilion) to the party. It's a fair bet that ATP hasn't previously witnessed a man who one minute is in a Michael Jackson fat suit and the next is dressed as Obi Wan Kenobi and performing a pair of songs about Star Wars. The poodle-haired pop satirist is nowhere near as revered this side of the Atlantic, perhaps best known for his parody of 'Smells Like Teen Spirit' and its inarticulate rage, but 'White And Nerdy' and 'Amish Paradise' are slick spoofs and the cleverly edited mock interviews with Celine Dion and Jessica Simpson (or should that be Jessica Sampson?) have even po-faced beard-strokers hooting with laughter. 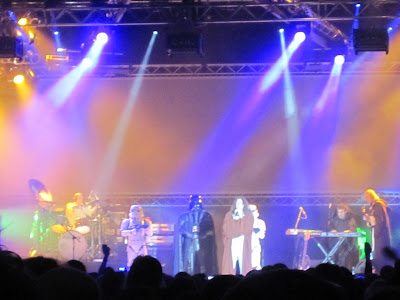 12midnight
The witching hour, and it's almost as if Weird Al and his Segway were never even here. Summoning up the hounds of hell as effortlessly as if they're ringing for a pizza are WOLVES IN THE THRONE ROOM (Centre Stage), decidedly not a feminist punk or indiepop band of the sort for which Olympia, Washington is renowned. The stage is in almost complete darkness, but the music is black - very black indeed. 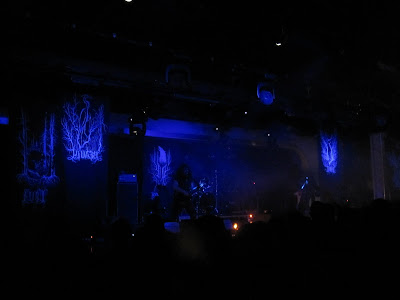 1.30am
With the lights back on, DEERHOOF (Centre Stage) see us out, but what could have been a joyous conclusion falls rather flat. Perhaps it's the lateness of the hour, the tiredness and relative sparseness of the crowd or the somewhat underwhelming new material, but they're unusually disappointing. The forthcoming album will be called Deerhoof vs Evil - tonight at least, they've lost that particular battle. 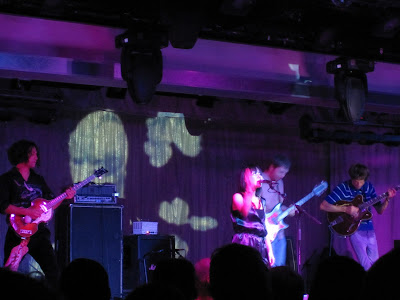 3am
What do we want? Songs with lyrics and structures (preferably verse, chorus, verse, chorus, bridge, chorus) of about three to four minutes in length! When do we want them? Now! But Godspeed! and ATP know us better than we know ourselves, and what we actually want, it turns out, is a nerdy Brooklyn blogger playing us musical souvenirs from his travels. If Brian Shimkovitz aka AWESOME TAPES FROM AFRICA (Crazy Horse) finds himself in trouble any time soon, it certainly won't be with the Trades Descriptions Act.

4am
Last weekend the outdoor 5-a-side pitch was graced by Pat Nevin, the ex-Everton winger and TV pundit having been invited along by Belle & Sebastian in his moonlighting capacity as an indiepop DJ. Tonight it's host to a bunch of Scandinavians so incapacitated by booze that walking is a challenge, let alone making connection with a football...
Posted by Ben at 1:52 AM