If December seems like a long time ago, that's 'cos it was...

4pm
Having been on the road for the best part of three hours, our carriage passes Steps Farmhouse. So THAT's what they've been up to post-pop career. Cue mental image of H with a stalk of straw in the corner of his mouth, up to his knees in manure.

5pm
We arrive at Reception still wondering who ATP have secured to replace Throbbing Gristle, Peter "Sleazy" Christopherson having died just days earlier. The answer: no one. Instead, they'll simply be playing Throbbing Gristle's music on the Pavilion Stage tonight, as a "mark of respect". Early ammunition for Statler and Waldorf (aka Gareth and Suresh - or is it the other way around?), who commence the grumbling.

5.30pm
Gareth (excitedly): "I've just seen three girls!" Suresh: "They weren't girls just because they didn't have facial hair..." Thoughts turn grimly to the probable length of the queues for the gents.

5.45pm
It's swings and roundabouts with the chalet - on the one hand, it's in pleasing proximity to the pavilion, but on the other, there's no kitchen. A solid diet of ropey fast food awaits.

6.15pm
Our first visit to the Centre Stage finds Growing hitting their last few notes. How infuriating. And to think that there's already been one band on up here, Dreamcatcher - how many people made it in time to see them?! This calls for a consolatory pint of Buzzard.

6.45pm
Familiar faces ahoy! Oneida's Kid Millions and Mogwai's Stuart Braithwaite, back after DJing at Pavement's bash in May, are among those holding court behind the long merch desk. It's ruddy cold in the pavilion - this year's essential accessory is a woolly hat, and those darned Christmas jumpers might actually come in handy for once.

7.15pm
Now the only act on the Pavilion Stage tonight, THE BERG SANS NIPPLE are, like much of the weekend's bill, an unknown quantity - even though, unbeknownst to me, I've come across one of the pair, Shane Aspegren, via his contributions to Bright Eyes' 2007 album Cassadaga. Nebraska native Aspegren and Parisian accomplice Lori Sean Berg occasionally allude to post-rock, but the busyness of their polyrhythmic cut-and-paste songs aligns them more closely with Animal Collective, pushing envelopes for fun rather than on principle. 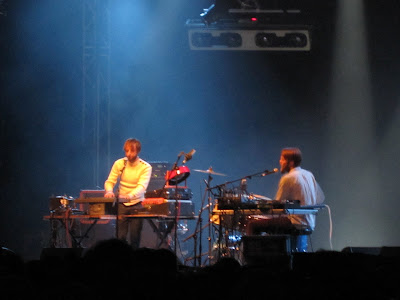 7.30pm
So Shahin Motia's here too (presumably to perform with Oneida) - might there be a possibility of a surprise Ex Models set with Kid Millions on drums? Here's hoping.

8pm
Now this really IS cut and paste, in extremis. BLACK DICE (Centre Stage) throw everything into the blender - psychotic synths, screeching noise, frazzled beats, fractured rhythms, the occasional tantalising snippet of a subterranean groove - to create a pulverised, technicolour, postmodern mess. And then force your head down into the blender for good measure. Like witnessing their chums Wolf Eyes for the first time, it's an ordeal, if not an entirely disagreeable one.

9pm
It's really saying something when you're craving a blast of Fuck Buttons as light relief. But we are, the chalet also resounding to a mix of Kyuss, Helmet and At The Drive-In.

10pm
"Godspeed You! Black Emperor is a Canadian power trio, often compared to fellow Canadians Rush. The band's musical style is hard rock and heavy metal although the band itself is reluctant to embrace this label. The band once described themselves as a cross between Emerson, Lake And Palmer and the Who." So sayeth the programme notes. Who said our hosts were po-faced killjoys?

11pm
Even still, GODSPEED YOU! BLACK EMPEROR don't take to the Centre Stage for this, the first of three sets over the weekend (two soirees and a Sunday matinee), wearing Hawaiian shirts and comedy moustaches and launch into a routine of knock knock jokes. No, instead it's the lengthy, ambient aperitif of 'Hope Drone'. Last time I saw them at an ATP, I had John Peel alongside me, and the accompanying visuals - of street protests and strings of stock exchange figures flurrying past - do seem a little bit dated despite bearing even greater significance now than they did ten years ago. Those projections help to disguise the fact that Godspeed! aren't the most visually arresting collective to watch, and there's an initial blip with the relative volume of the drums to iron out. But when they truly hit their stride, with 'Gathering Storm' and set-closer 'Blaise Bailey Finnegan III' (the latter taken from what is to my mind their best release, 1999's two-track EP Slow Riot For New Zero Kanada), it's a transcendental experience that would have Classic FM fans shitting themselves in awe and terror. 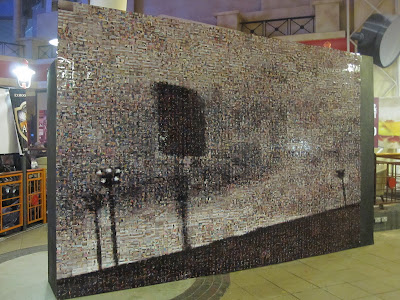 1am
I bump into Mike, one of my chalet-buddies from the Pavement ATP. He's off to see Tim Hecker (who he?), and informs me that Daniel Higgs has been left stranded at the airport. Our inability to cope with even a modest amount of snow must be very bemusing to a North American, particularly one missing out on a prime engagement.

1.30am
How ironic - DJ RUPTURE (Reds) has suffered a rupture. Nothing kills a party atmosphere like a power cut.

3.30am
Sod political debate - the hotly contested subject of discussion in That Quiz Blogger's chalet is Fleetwood Mac's Rumours...
Posted by Ben at 10:53 AM

You realize that in my head "Gareth" is Gareth Campesinos!

And yes, the snow thing is HILARIOUS.

pretty sure soupie is statler ....

Ian: Afraid not - though perhaps I should just refer to him as Statler (or by his nickname, Soupie) to avoid confusion...