Perhaps it's about time I got round to recounting what happened back in August, when the Welsh hills were alive with the sound of music...

12.45pm
Stocking up in Waitrose in Abingdon, who should we spot in the chilled desserts aisle, kids in tow, but Jonny Greenwood? We really must stop meeting unexpectedly, Jonny...

4.30pm
We arrive, and I've driven the whole way - no mean feat for a learner, even if I do say so myself. After I drove to Wales the previous weekend, Jen prescribed herself gallons of gin to relax her frayed nerves - will there be a repeat tonight?

5.45pm
Our tent's up, and now it's the tricky task of desperately trying to save spaces for latecomers. How we've managed to be the first to arrive given that most of the others are coming from Cardiff I'm not quite sure.

7pm
Distress call from another friend setting up camp elsewhere, who we find attempting to erect a large three-man tent on his own, partner and small child sheltering in the car. With water pooling on the canvas and making the operation all the more difficult, there's no time for pleasantries - it's all hands to the pump.

7.30pm
Job done, we incredulously survey the family area they're camped in, populated by gargantuan tents which look as though they probably have their own servants' quarters.

9pm
Lots of tie-dye on display in stalls, bubbles as big as your head floating by - yes, this is definitely a festival. 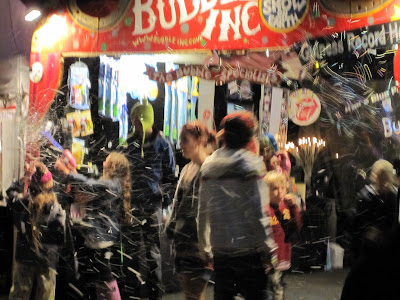 9.15pm
Just as was the case three years ago, my first meal is a falafel courtesy of the chai place at the top of the hill overlooking the Main Stage. The smell is wonderful, the falafel itself slathered in chilli sauce and tahini (and good value at £5.50), and the tent a welcome refuge from the elements. 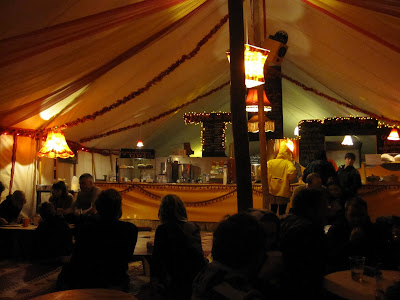 10.30pm
Back at the tents the brazier has been called into action, fuelled by pieces of smashed wood taken from the side of Gareth and Mel's old bath. We huddle together beneath the gazebo, fighting a constant battle to keep things dry.

12midnight
Suresh claims he's "taking a break" and crawls into his tent. No one's fooled - this will be no powernap...

1.45am
With the brazier burning low, Chris is holding court. Recently returned from three months of adventures around Europe, he relates tales of being blown away by Les Savy Fav (and Tim Harrington in his yeti suit) at Primavera in Barcelona and pretending to be Jewish for a free meal (to be expected for a man of his extraordinary spendthriftiness).

In the next instalment: Fuck Buttons, pie traitors and lost amphibians.
Posted by Ben at 6:41 PM