What was it I said last year about having to have the last word?

As then, and as usual, what follows is translated from biro hieroglyphics jotted down on scraps of paper when under varying degrees of influence - but the difference this time around is that, having perhaps recklessly decided to take my camera with me, all of the photos are mine rather than half-inched from others better prepared, more sober and more steady-handed than me. Just thought I'd better get the excuses in early...

3.30am
With the announcement that the gates will now be open from 9am, we decide to set off earlier than ever before in a bid to avoid the scrum. My journey actually started last night with the train ride from Didcot to Wolverhampton (where my carriage awaited), but has been broken by a few hours of supping homebrew in front of repeats of Never Mind The Buzzcocks.

4am
Walking around Tesco feels like being in a scene cut from the final edit of Shaun Of The Dead.

7.30am
It's a beautiful day, there's minimal traffic and we're very nearly on site. Things are going suspiciously smoothly... 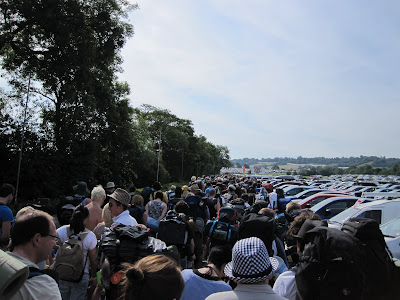 9.30am
The first T-shirt to register on the radar: a globular cartoon character wearing a turban and rucksack bearing the legend "Mr Jihad"... Someone in front of us is playing The XX and thereby laudably doing their bit to make the wait more tolerable.

10am
Discarded trolleys line the path, with wheels missing and axles shattered by the weight of gallons of alcohol - forlorn casualties of combat whose owners have soldiered bravely on.

11am
A Mexican wave makes its way down the hill. The entrance still nowhere in sight, we decide that next year we'll arrive wearing T-shirts which read "I'm only here for the queueing".

11.45am
We sense that we're very close now, but the waiting has drained some of our near-neighbours of what little Glastonbury spirit they had to start with. "Come on you fucking hippy cunts!", bellows one. A bird of prey circles ominously overhead, eyeing up those who are flagging in the heat.

12noon
We're in!!! Through the Portal of Pleasure, ticket checked, wristband affixed and off across the fields in the direction of Pennard Hill.

1pm
The tents are up (Base Camp being in an almost identical spot to last year), the contact lenses are in and the suncream has been reapplied. The nearby cafe is pumping out the sort of tribal dance music that seems peculiar to Glastonbury, and someone expresses a hope that it won't continue through the night - until someone else points out that it might be a useful diversion given that one of our number found himself on the wrong end of death threats for his snoring last year... 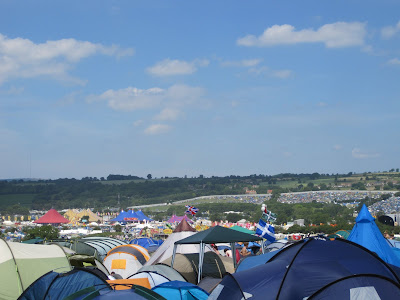 2.30pm
To the cider bus (via a litre of water) for a one-way ticket to drunkenness!

3pm
England v Slovenia kicks off, with England needing a decent result to progress to the knock-out stages of the World Cup. And what better circumstances in which to watch it than on the Pyramid Stage screens with thousands of others in blazing heat? Even if my immediate company includes a smattering of Welshmen, a Kiwi and a friend in a knock-off Zambia shirt... 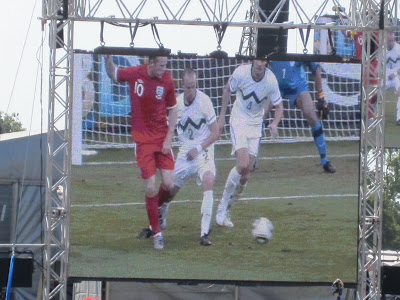 3.15pm
I thought I'd seen everything, but someone's got a St George's Cross wheelbarrow. For the patriotic gardener, obviously.

4.15pm
Oh please no. The group near us armed with vuvuzelas they have no idea how to play are all wearing Newcastle shirts of various vintages. Typical. 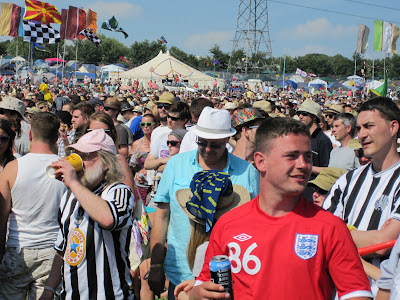 4.45pm
The final whistle brings an explosion of joy, but I can't help feeling that, while it was the victory we craved, 1-0 is a sobering result - we may also have hit the post, but much improvement is going to be needed if we're to prolong our exit any longer. But who will we face next?

5pm
Landon Donovan. Landon fucking Donovan. The American's last-minute goal against Algeria has meant the USA top the group, pushing England down to second - and as a result rather than lining up against Ghana on Saturday night, when there are few clashes with bands, England will be playing Germany on Sunday afternoon, when some of my personal prize draws (Grizzly Bear, Holy Fuck, The Drums) are on. Arses. Whichever way I decide it's going to be difficult.

5.45pm
A surprisingly good hog roast from one of the generic burger vans near the Pyramid Stage, crammed with crispy pork, tasty stuffing and apple sauce. £6 well spent.

6pm
Overheard: "I love this place. I can burp and fart and not get moaned at". Of the many reasons to love Glastonbury, that's one I've not heard before.

6.30pm
Back at the car to collect the supplies (read: wine) I couldn't summon up the strength to carry on our first trip, I overhear one man remind another, in all seriousness: "Don't forget your fairy wings". Where else would you hear that?

7.30pm
Spotted: a T-shirt parodying the cover of Pink Floyd's The Wall with the slogan "Keith Floyd The Chef".

9pm
The sun's close to setting, and we're still sat around at the tents chatting. In some ways it seems a shame, with there being so much to see and do on our doorstep - but then the simple pleasures of time spent catching up with friends shouldn't be underappreciated. 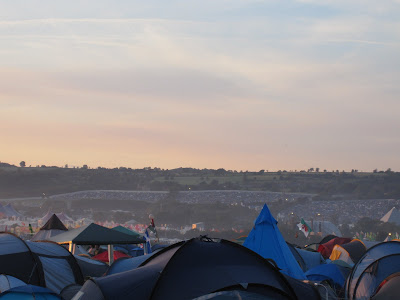 11pm
How exactly I'm not flagging, having slept for at most 30 minutes in the last 39 hours on Tuesday, I have no idea - but while everyone else slowly slinks off shamefully to their tents, I have an appointment with another friend, Adam, at the Park's Stonebridge Bar. He's with a couple of wet-behind-the-ears newbies, and I can't help but feel a little envious, knowing what hitherto unexperienced joys await them.

12.30am
Stone Circle is the usual riot of firelit faces, Chinese lanterns and tribal drumming. Even as a veteran, from here the sheer scale of the site never fails to astound.

2am
Somewhere called the Chameleon Bar, jigging away to 'Livin' On A Prayer' and 'Sweet Child O' Mine'. Dignity? Pfft.

2.30am
If there's a surefire sign that you've had too much to drink, it's hearing the opening chords of Meat Loaf's 'Bat Out Of Hell', making eye contact with your mate, grinning broadly and deciding not to leave (as you've been talking about for the past 15 minutes) and instead to get another pint in.

3am
Ah Park Tower you beacon of loveliness... 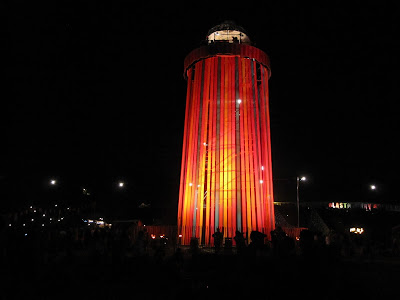