After the muddy frolics of Glastonbury in June and the eardrum-bashing of Supersonic in July, it was time for my third and final festival of the summer, Green Man.

So, to whet your appetite, over the next few days you can expect tales of wellies, ODing on folk, not ODing on pies or cloudy cider, cardboard antlers, redneck discos and the drunken ramblings of legendary ex-Pavement frontmen about female gorillas and "butthole waxing"... 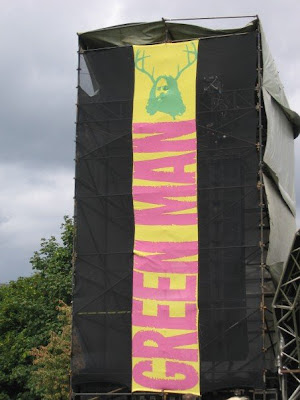 5pm
After a horrible, horrible day at work, an escape to the country. Brecon Beacons here I come.

8pm
Almost there - but what's this? They appear to be building some kind of superhighway into the heart of the middle of nowhere, which means uneven road surfacing, strange and erratic signposting and roundabouts constructed entirely out of traffic cones. But we won't be thwarted and follow the heavily-laden car in front, trying to ignore the driver's dithering and convince ourselves they have a better idea of where they're going.

8.30pm
The car parked, we walk across lush grass over the brow of the hill, down a track, over a bridge spanning the River Usk and through a grandly imposing gatehouse. Well, this is Glanusk Park, home to the Legge-Bourke family, after all. Might we see Wills having a discussion with Robert Plant about red snappers or Harry pawing lasciviously at Joanna Newsom?

8.45pm
The scenery all around is truly beautiful - but all I can think about is putting my bags down. The shoulder strap feels like it's about to cut through my arm like a cheese wire.

9.15pm
Pitching tents in semi-darkness is no fun at all, especially when there are two boxes of wine just waiting to be cracked open.

10pm
It might be the first night, but it's all very peaceful, the only discernible sounds being the chatter and laughter of children and the whooshing and hissing of airbeds being inflated. It's that kind of festival - and some of that inflation isn't even being done manually.

10.30pm
Er, there appear to be no urinals or long-drops, just Portaloos aka Tardises (Tardisses? Tardi?) Of Terror...

11pm
... which makes my choice of first on-site meal - a falafel smothered in chilli sauce - particularly perverse. We sit cross-legged on a matted floor eating our veggie food, me deciding I'm not that keen on tahini (certainly not in such quantity) while watching a couple of blokes playing a very considered game of chess. V this very definitely ain't.

11.15pm
Barely two hours in and I'm already suffering from beard envy. Not that many are of the copious David Bellamy home-for-birds-and-small-mammals variety that you might expect at what is still at heart a folk festival, but the scratchy, scruffy sort that cluster on the chins of your typical Supersonic-goer.

11.30pm
The Pieminister stall is stumbled on and its location noted. All is well with the world.

12.30am
Unable to have a fire around which to gather, we huddle around a pair of enormous miners' lamps, quaffing an assortment of booze.

1am
But it's a very clear and therefore very cold night, and for some reason the wine has failed to provide a booze string vest let alone a booze overcoat. Bed it is, then.
Posted by Ben at 1:15 AM