Yep, you read that right. After a fallow 2012, tickets for next year's Glastonbury go on sale in less than a fortnight's time - and yet here I am only just getting round to writing up last year's bash. Still, I'm determined to clear the backlog and be true to my word about gig/festival reviews appearing at some undefined point in the future, so here we go...

5.30am
A quick pick-up in Bristol en route. Alluring though the signs advertising HorseWorld are, we won't be going today.

8am
An hour inching forwards and then we're on site and the on-foot leg of the journey begins.

8.15am
My watch stops the moment we join the queue. Best-laid plans for hopping nimbly between stages to pack in as much as possible lie in tatters.

8.45am
Crisis averted - the watch is ticking away again, seemingly unconcerned at the panic its temporary doze induced. In less good news, it's belting it down. Miserable memories of 2007 resurface. Is being accompanied by Jen some kind of curse? Given that Glastonbury is Phase II of our three-phase honeymoon, perhaps I'd be best advised to keep that speculation to myself.

9.15am
You have to marvel at the resourcefulness of some fellow festival-goers: one is dragging a full-size car trailer, one has loaded their worldly possessions into a brown City of Plymouth wheelie bin, and one seems to have decided that all he needs to guarantee a good time is 160 cans of Strongbow.

9.30am
We're currently stood in line next to two enormous motorhomes with canvas and flooring between them, and tables and chairs. A woman is putting away an expensive coffee machine. How the other half live - even at Glastonbury.

10.30am
Bright fluorescent wristbands secured, we're let loose on the site. Pennard Hill is full so, for the first time since 2002, our sizeable collective will have no option but to camp elsewhere. Park Home Ground is the verdict - further from the toilets and the entry to the Park, but it could be worse. That said, it's chucking it down again, and with renewed vigour.

11am
Mass tent erection. Proof that it's impossible to put up a tent without uttering a series of exclamations that would have Kenneth Williams arching an eyebrow and a schoolboy tittering. "I'm nearly there", "I can't find it", "Put it in that" etc etc.

12noon
Attempting to dry out - though some of our party are hell-bent on the opposite, having hit the booze at 5am. Talk turns to the line-up, with the consensus that the Wombles are a prospective highlight. "Their first album's the best", someone sniffs. "They only play the new songs", says someone else. "Pretentious."

2pm
The graffiti has already started in the toilets. Much of it seems to be aimed at headliners U2 and their alleged tax avoidance, but Dan spies a sticker advertising homeopathy which asks "What are you waiting for?" and replies in biro "Peer-reviewed evidence"...

4pm
Just digesting some of the most painful schedule clashes. Personally speaking, the big questions are which Warpaint set I should try to see, and whether I'd be missing out on anything much by spending a large chunk of Saturday evening watching comedy. 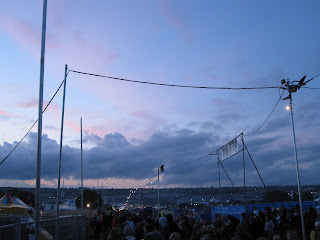 6pm
The skies have cleared a bit, the wine's flowing like water and we've embarked upon an exploration of other areas of the site, starting with the Dairy Fields.

8pm
As blokes, apparently we have it easy here: "You can pee on a pile, we can't squat on a pile."

10pm
Red wine refills are coming at a worryingly regular rate. Jen and I spot the best man from an episode of Don't Tell The Bride. Not sure what's worse - recognising him in the first place, or being mildly excited about it. 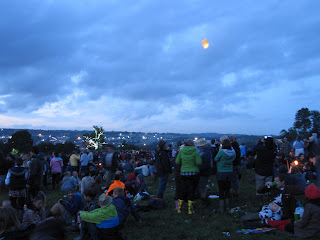 11pm
Stone Circle is host to a burning effigy and a fireworks display, as well as the usual hordes of wide-eyed revellers stumbling around or bent double with laughter after a hit of nitrous oxide. Sobriety is in very short supply indeed.

11.30pm
Attempts at conversing with Suresh reveal that I'm not longer capable of conventional sentence construction, mangling phrases with an idiosyncratic disregard for the rules of grammar. Perhaps an opportune moment to stagger back to the tent for lights out.
Posted by Ben at 12:28 AM