It's fitting that the day of Sounds From The Other City should start with Man City taking a giant stride towards their first league title for 44 years, the "noisy neighbours" finally stepping out of the shadow of their cross-city rivals. Salford - the "other city" in question - is the neighbour to Manchester, and today it too is particularly noisy.

Unlike with City, there has been no obvious massive influx of cash in Salford. It may be gradually becoming a haven for artists, bohemians and hipsters, drawn by its earthy character and (relatively) cheap rent, and so you can be sure that gentrification won't be too far behind - but, for now, it's telling that Chapel Street is littered with derelict buildings (many of them pubs) while the Beetham Tower, a potent symbol of Manchester's confidence and status, is visible in the distance, lording it over all around. 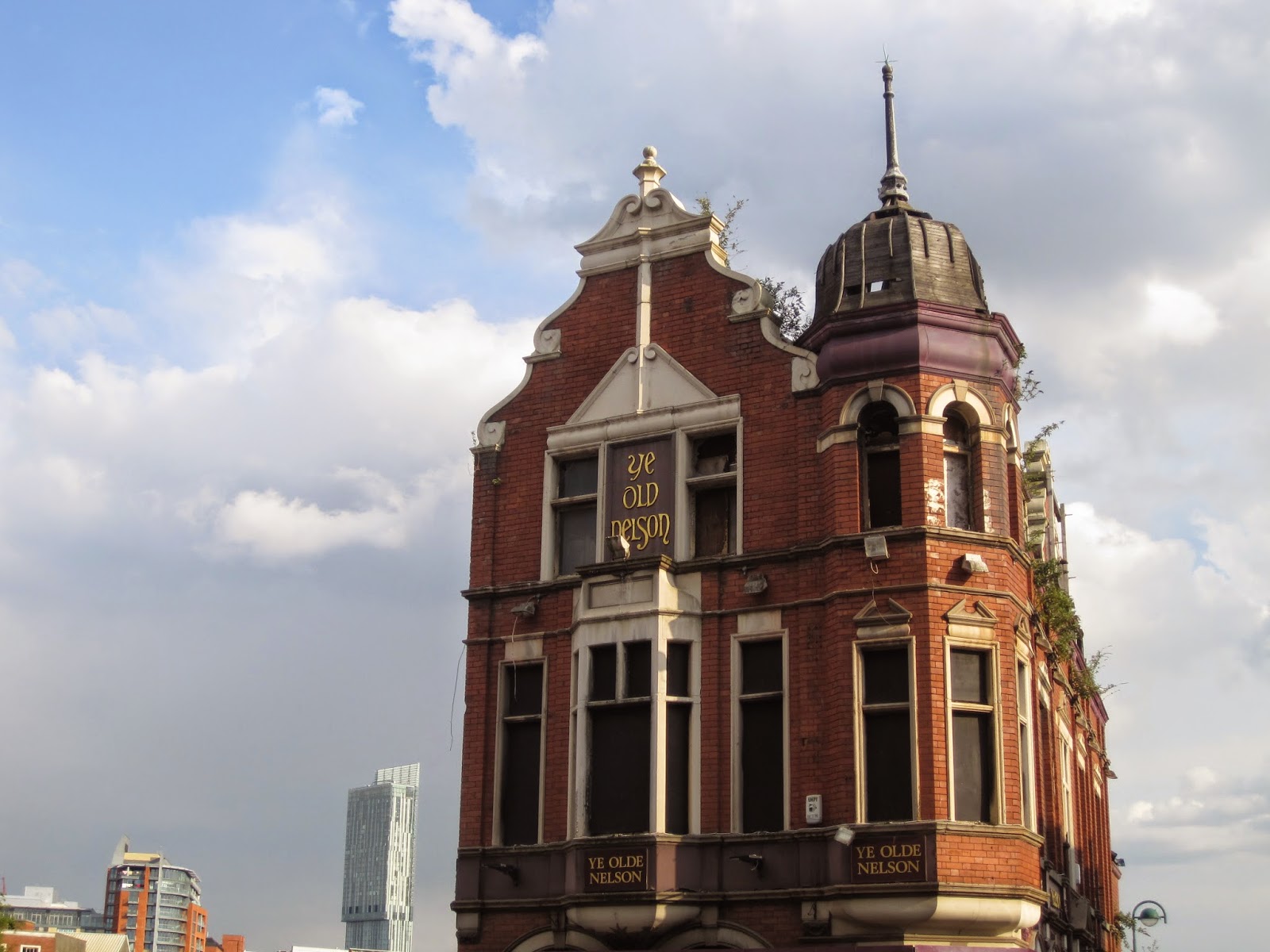 We start at the local arts mecca that is the Islington Mill with Halifax quintet THE ABC CLUB, who've featured as an NME Breakthrough Band Of The Day. Don't hold that against them, though, as their twitchy 2012 reboot of The Smiths fronted by a female Ian Curtis promises much - both for their future and for the festival that lies ahead.

Disappointment soon follows, though, when we're unable to get into the Rovers Return (not that one) for SEX HANDS, who may apparently be obsessed with Friends but do at least do a nice line in Pains Of Being Pure At Heart-style C86 fuzz. Apparently we'd be a fire hazard - charming. We're also annoyed to miss HEROIN DIET (we're not just circling the good band names on the programme, honest...) and don't catch enough of NEW HIPS in the Black Lion to form a judgement of their mathsy obtuseness.

Typically, then, the next act we do see properly, SHINIES, are nothing earth-shattering - dull indie dressed up in new clothes, and with a hoodied guitarist who continually stands in the way of the projector. Jen disappears outside to "shelter from the noise". If this modest racket is upsetting her ears, then I really do fear for them - the festival's only just begun...

More disappointment comes after we walk the length of Chapel Street between the two furthest-apart venues only to discover we've missed SUPER LUXURY (marvellously billed as AC/DC meeting The Jesus Lizard) due to rescheduling. At least there's the consolation of finding ourselves in a good real ale pub, the Crescent. Another pint down, and the rather unique facepainting table in the corner starts to look dangerously appealing. 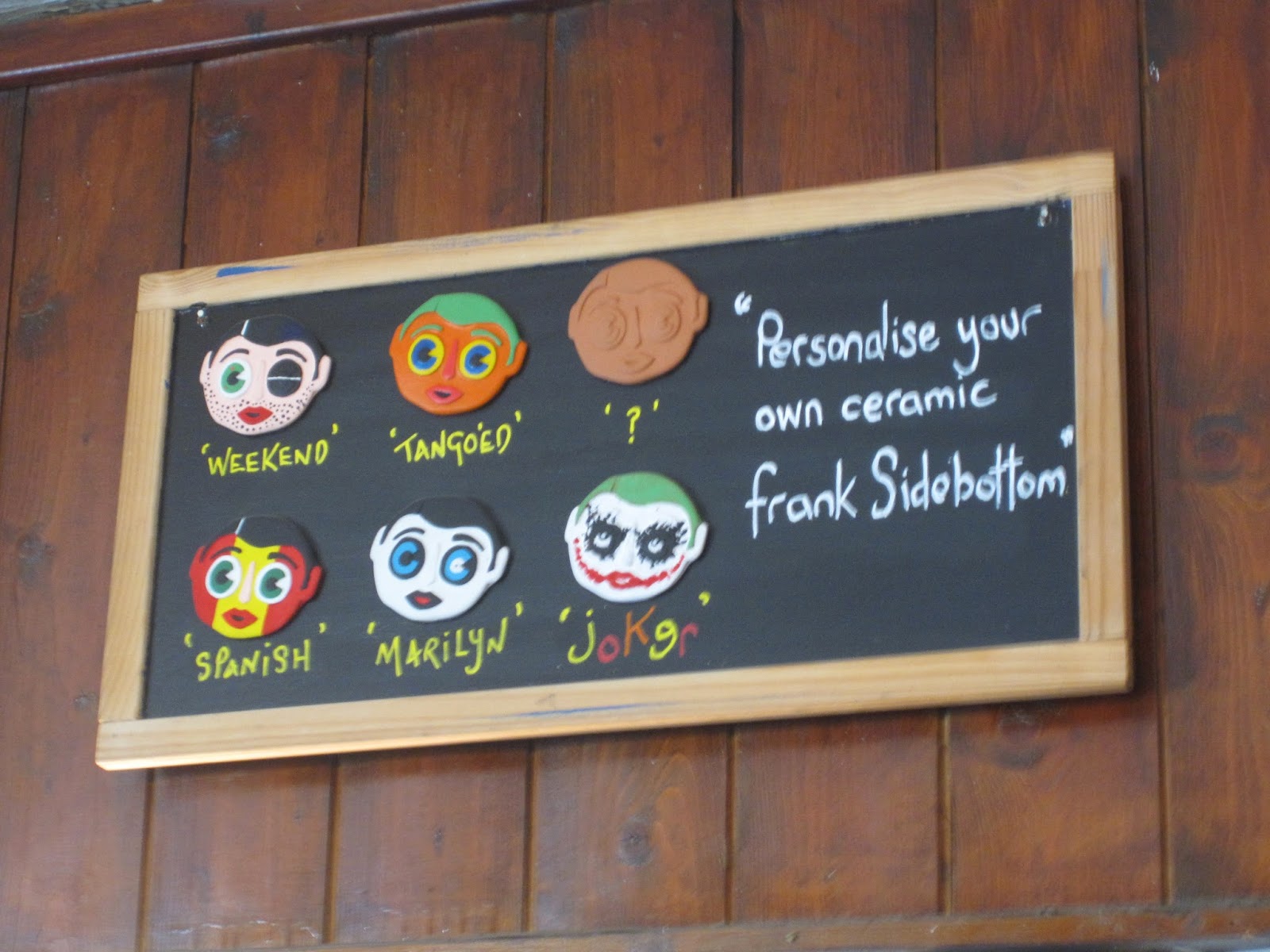 On our way back down the street we call in at Ye Olde Pint Pot, but it doesn't seem to have kicked off there yet, so it's onwards to the Salford Arms - once obviously a pub, but now more a Tibetan restaurant - where YOUNGHUSBAND impress with their individual take on shoegazey psychedelia (if not with their tie-dye T-shirts).

Back at the Islington Mill, and having seen FEAR OF MEN once before, at Southsea Fest, I pretty much know what to expect: neat and charming indie pop, a guitarist whose knees appear to be superglued together, some griping about the sound levels, a cheekily unacknowledged cover of The Chills' 'Pink Frost'. 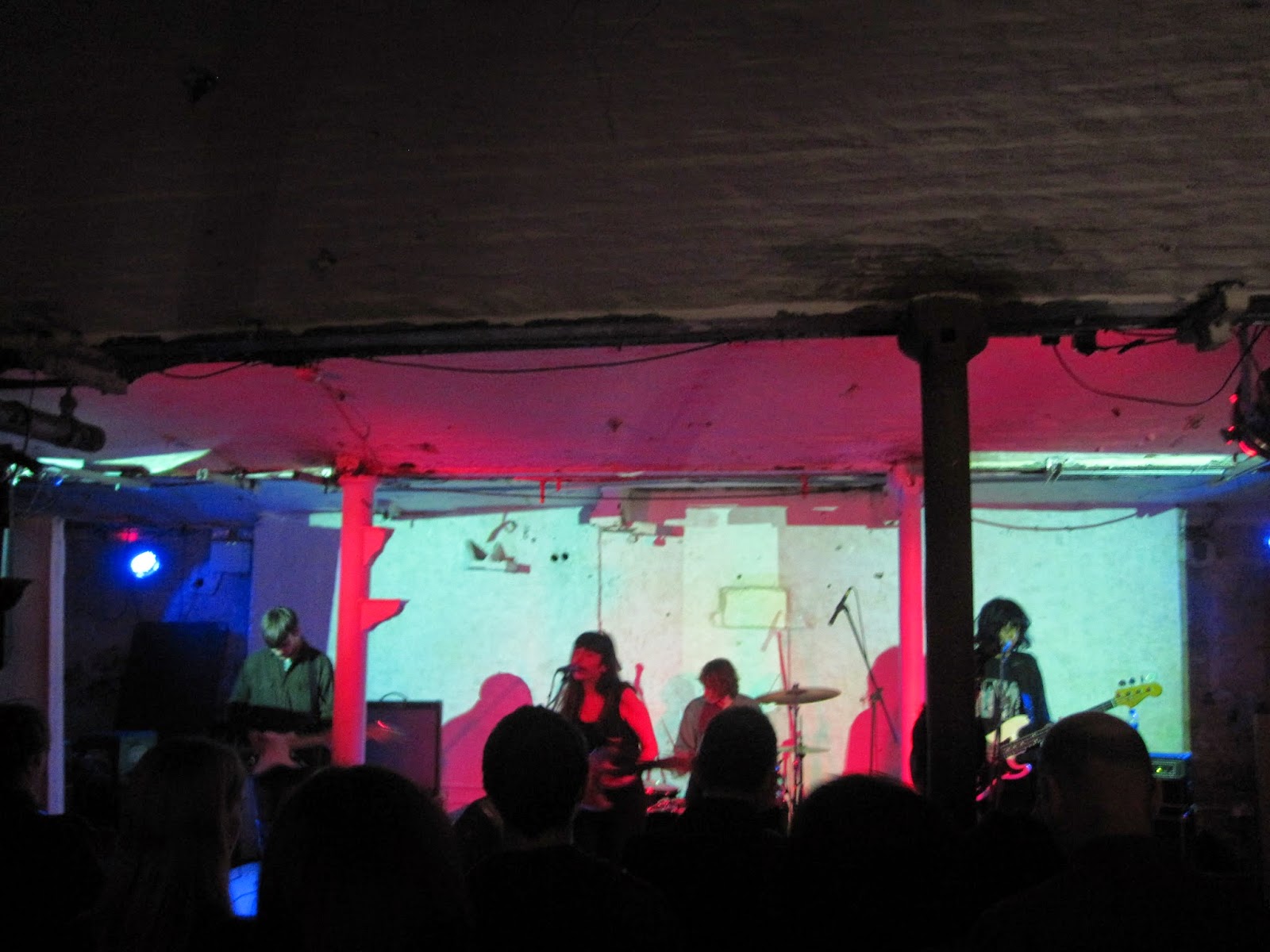 THE HISTORY OF APPLE PIE (Salford Arms) are chums of Yuck and come from very much the same place - somewhere situated roughly between US alt-rock and UK shoegaze. My kinda town, in other words. Rocking some serious fringes and at least one cable-knit jumper, they're a bit rough around the edges (no bad thing) and guitarist Jerome Thomas, with seemingly hundreds of pedals at his disposal, is chiefly responsible for the fact that I leave with a smile stretching from ringing ear to ringing ear. 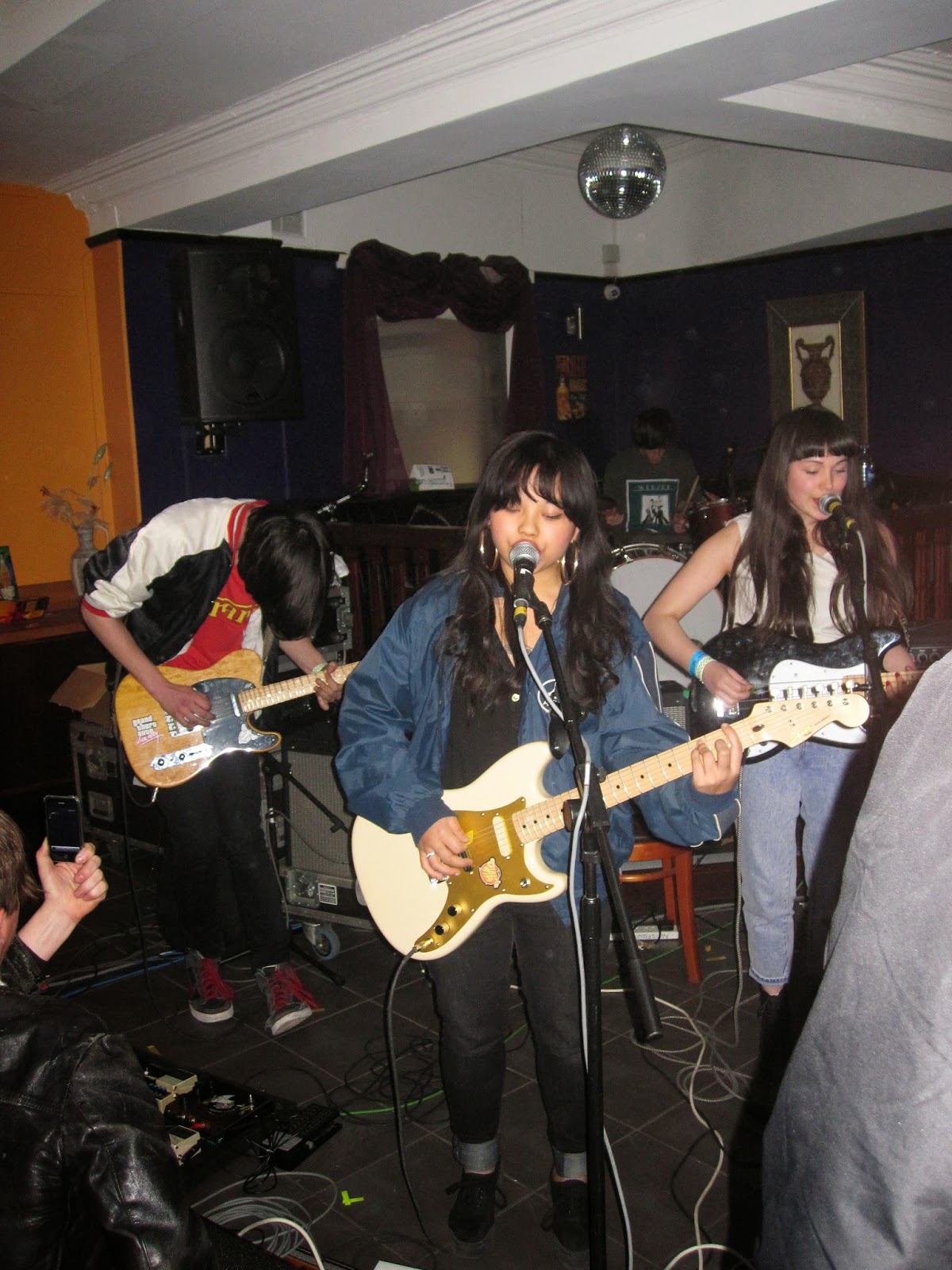 BROWN BROGUES appear no less popular with the festival's hipster set than the type of footwear after which they're named, judging by the crowd that's packed into the upstairs room at the King's Arms. The duo play nicely scruffy psych-scuzz of the sort that would get John Dwyer all hot under the collar and get me wondering whether this is what the White Stripes would have sounded like if they'd never left the garage and instead locked themselves in to inhale all the fumes.

The downstairs room of the United Reformed Church is the rather unusual setting in which Cardiff fuckheads ISLET find themselves soundtracking some specially commissioned visuals comprised of family photos warping into one another. As a former resident of the Welsh capital who retains a lot of affection for the city's music scene, I feel like something of a cheerleader - but in truth it's not amazingly exciting (certainly not a patch on their usual oddball antics) and one onlooker resorts to amusing himself by rearranging cans of Red Stripe into patterns.

Annoyingly the URC stage is now running late, so we're forced to miss Teeth Of The Sea in order to catch THE LOVELY EGGS at the Salford Arms. Beloved by all sorts of people (including Gruff Rhys, who produced recent single 'Allergies' and starred in the video as Cosmic Death), the pair - husband-and-wife combo Holly Ross and David Blackwell - are a bizarre blend of twee, powerchords, childish glee, Northern humour and surrealist silliness. There aren't many bands that would write a song about an olive rolling out of a sandwich and prompting existential reflections on the size of the universe, or another called 'Have You Ever Heard A Digital Accordion?' which rhymes "beef bourgignon" with "DeLorean" and "Richard Brautigan", or another for which the video features John Shuttleworth with a sausage roll on his thumb. There are even fewer that could somehow make it all riotously enjoyable rather than just a self-consciously zany car crash. 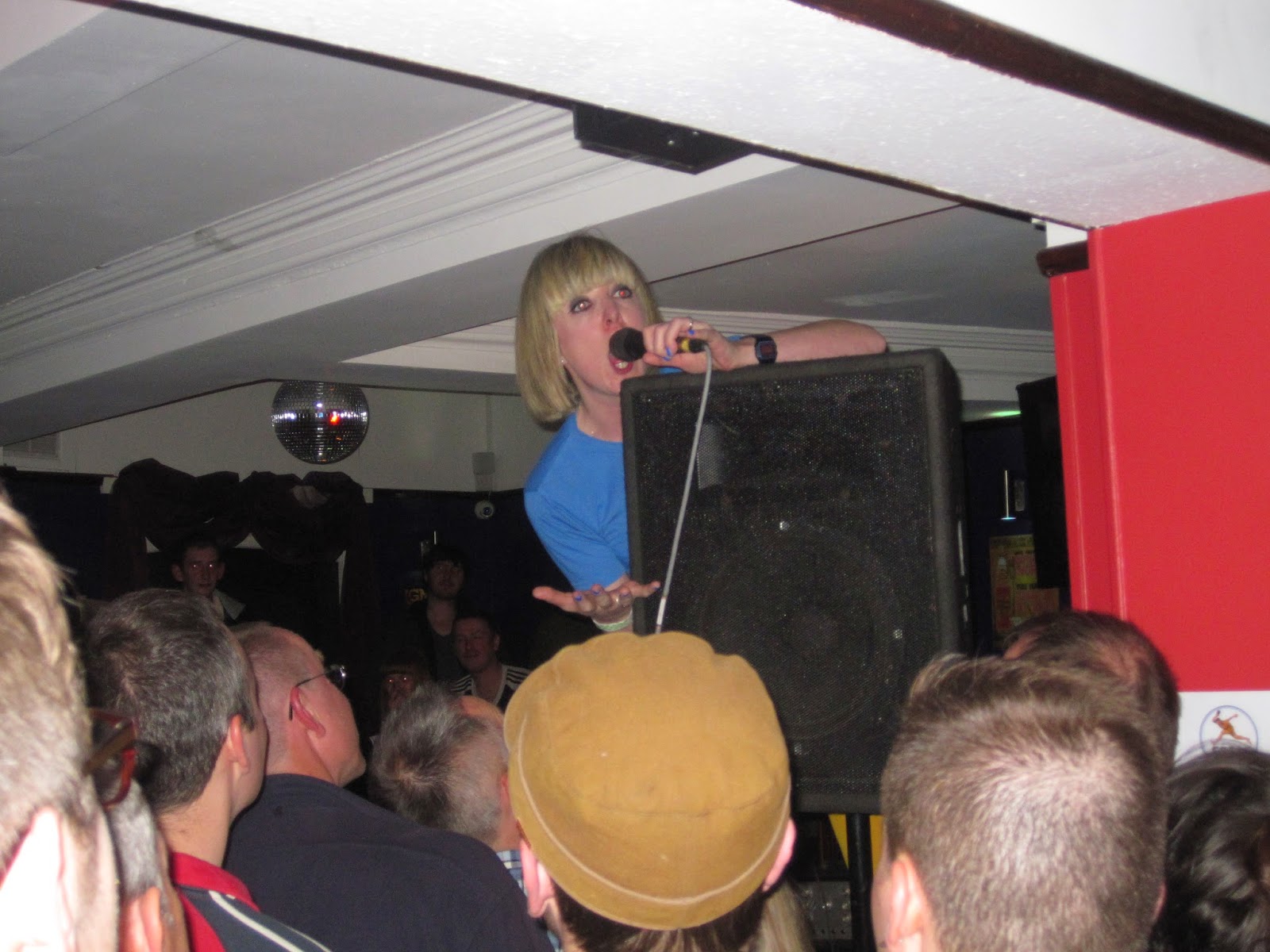 And so to the last band of the night upstairs at the King's Arms, Please, whose choice of moniker makes them nigh-on impossible to trace online. A shame, as their arty rock, performed with two guitars and drums, is very tidy and soon has me wishing I'd been able to see more than just the tail end of their set. I'd recommend they should team up with Battles-approved art punks Thank You for a joint headline tour, if it wasn't for the fact that the latter called it quits at ATP last year. 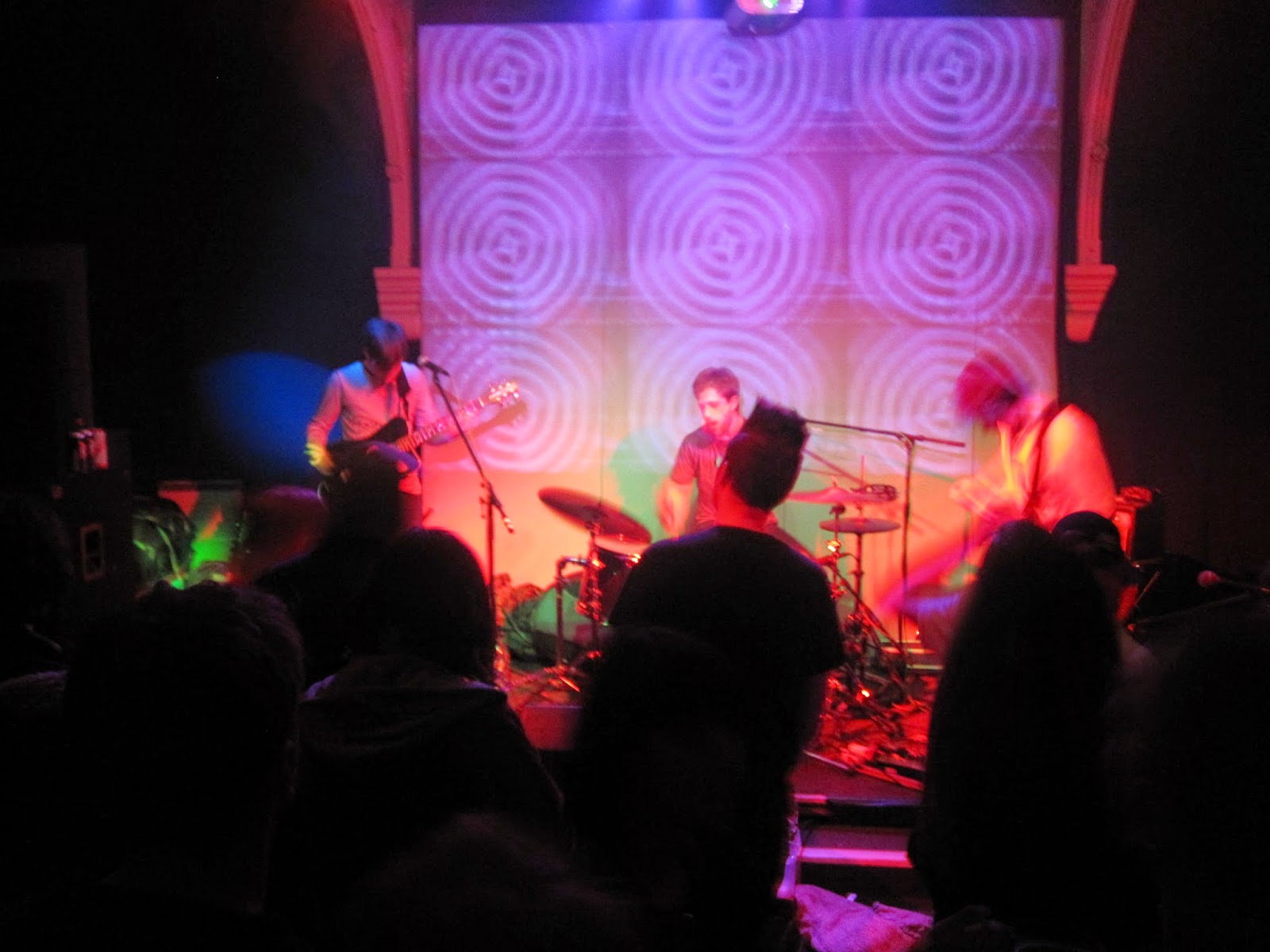 The music over (for us, at least), but with further ales in hand, we find ourselves sat around a roaring fire out in the beer garden with a local chap named Dave, a real character with bulging eyes and tales aplenty from his 20-year stretch inside. He serves as a reminder that the takeover of Chapel Street has only been temporary and that Salford certainly isn't all skinny jeans, soy lattes and penny farthings just yet.
Posted by Ben at 11:39 AM