12.30pm
Brian returns, telling the tale of spotting a severed hand in the pool. Thankfully, it turned out to be plastic.

1pm
We're all glued to a comedy sketch show called SCTV, starring John Candy, Eugene Levy and Rick Moranis (looking a lot like Woody Allen), amongst others. With that cast, it was never going to be a disappointment.

2pm
Pizza Hut is calling, and we duly carboload for the afternoon, evening and early hours ahead. The fact that the Very Berry smoothie - which should have been patented as a hangover cure - is no longer available on the menu is offset to some extent by a (relatively) soothing dining soundtrack that features Cat Power, My Bloody Valentine and Sonic Youth's 'Little Trouble Girl'.

3pm
Given that - like their fellow curators Les Savy Fav and Battles before them - CARIBOU (Centre Stage) will also be playing a headline set later, their first show of the day isn't exactly low-key. There are three brass players and a flautist, and two drummers playing different drum lines, all contributing to a euphoric free jazz skronk overlaid with sweet Beach Boys vocal harmonies. As my first sip of lager of the day coincides with a white noise section, I get a huge headrush and feel myself in danger of falling over and faceplanting that grubby carpet. Still, I'd die happy. 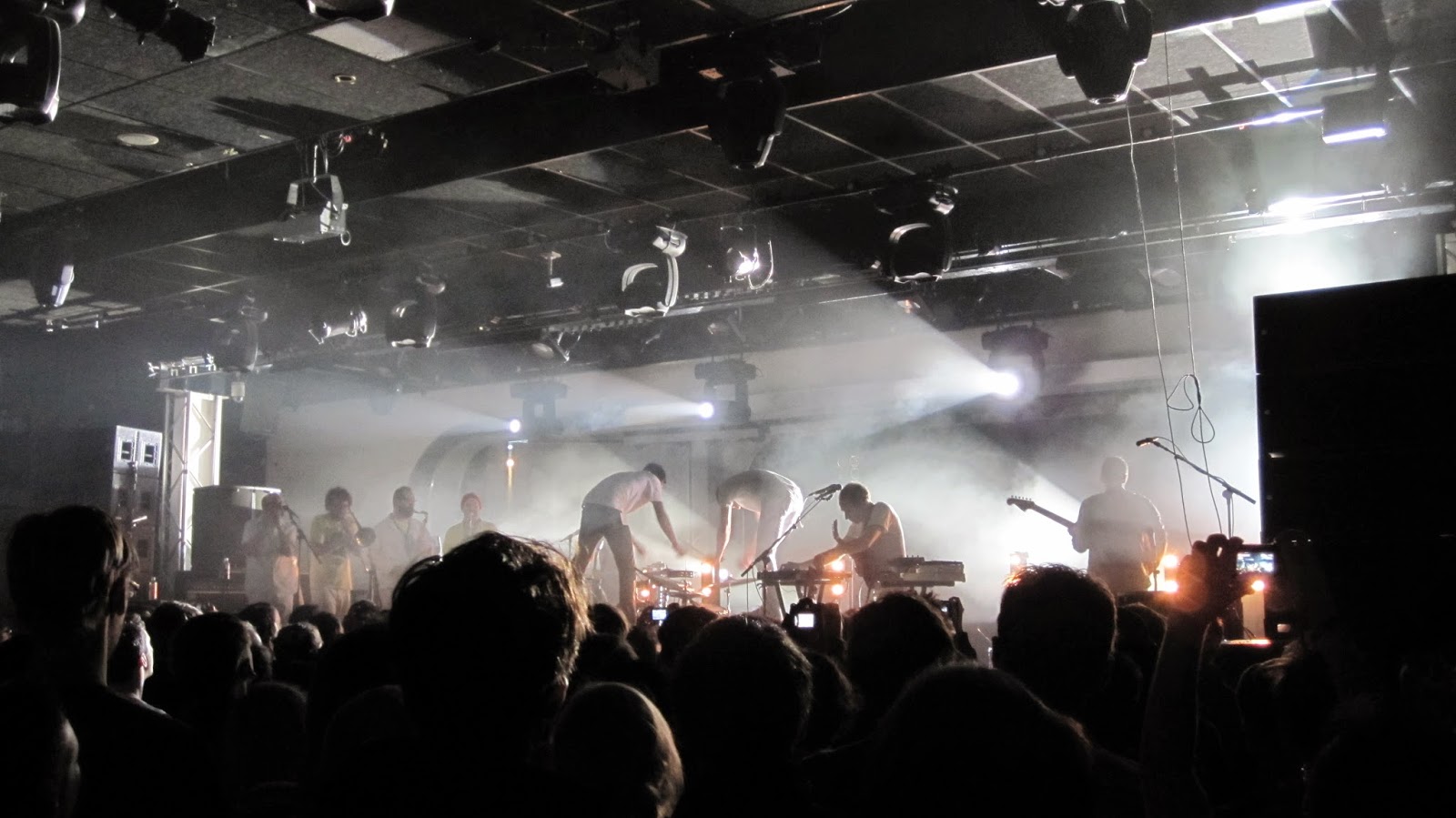 4.15pm
Reds has seen a few things over the course of ATP weekends, but I doubt it's ever played host to a Steinway baby grand piano before. PHAROAH SANDERS is a man with serious musical pedigree, having made his name as the saxophonist in John Coltrane's band, but in truth his supporting cast are equally phenomenal. The double bassist is a ringer (how on earth do you just pick this stuff up?!) while the drummer is simply sensational, the best of the weekend, and all the more loveable for making monkey faces throughout. The music is hard to get a handle on at first, but then an upbeat number makes a connection, even if it's the plaintive mood pieces that stand out. There's even some call and response for the final song, the assembled heathens understandably rather happier singing "Hello" than "The power of God". Overall, it's perfect for a Sunday afternoon, and, even more so than Gary Numan, Sanders is overwhelmed by the love radiating from an audience very different to his usual. 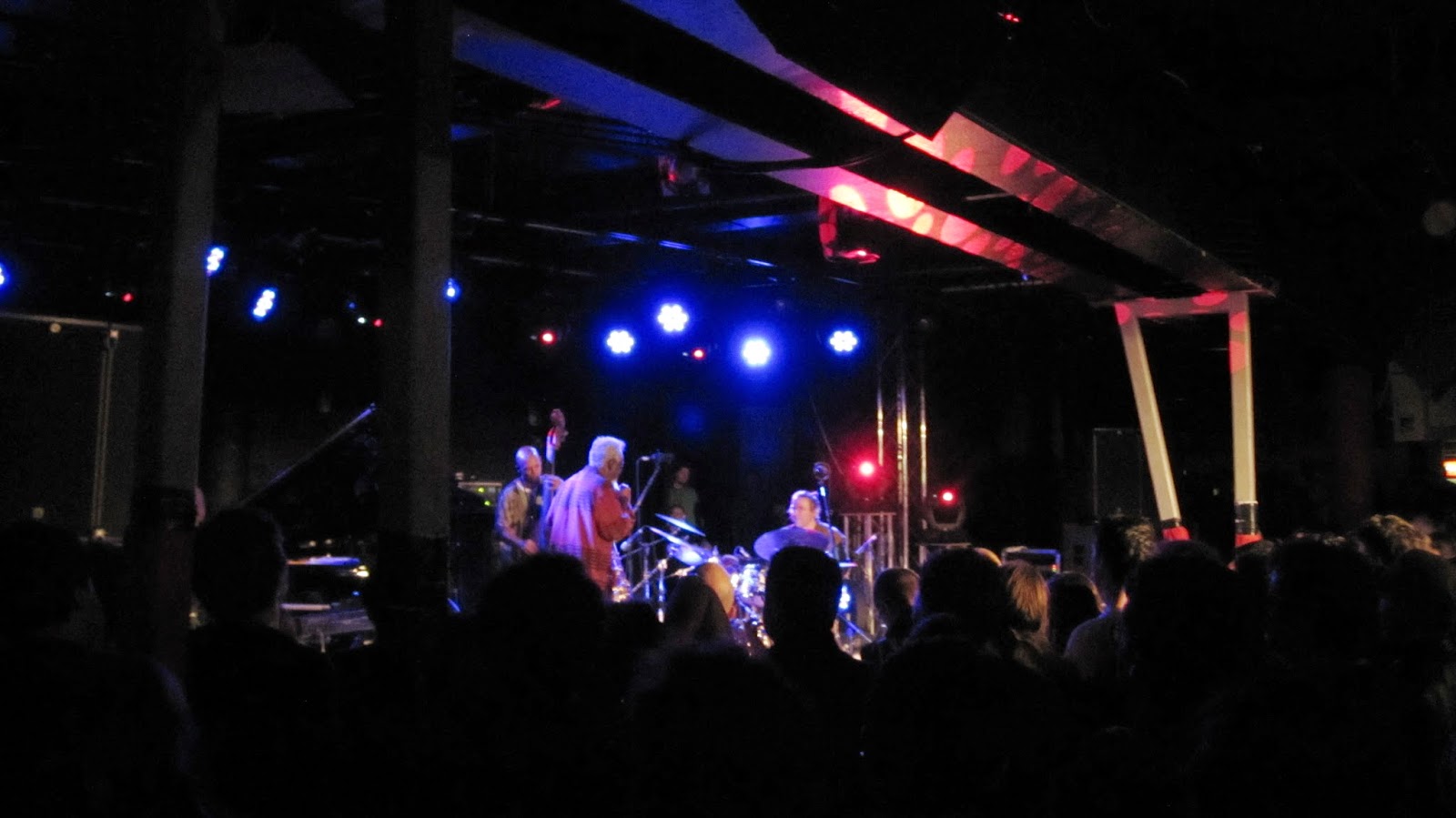 5.15pm
ATP TV comes up trumps again, with Deconstructing Dad, a tribute to Raymond Scott (the inventor of the sequencer and the composer of the Ren & Stimpy theme tune) by his son, being followed by Paris Is Burning, an eyeopening documentary about transgender balls in 1980s New York. You could easily spend all day watching, and we have to remind ourselves that there's still plenty to enjoy going on beyond the four walls of the chalet.

6.15pm
Among the stars of last year's Godspeed-curated shindig, THE EX (Reds) are back, and this time they've got GETATCHEW MEKURIA for company. While on paper a collaboration between a Dutch post-punk outfit and an Ethiopian saxophonist of a ripe old age might seem odd, it soon sounds incredibly natural, both on the same rhythmic wavelength - no doubt a result of the fact that they've actually been playing together on and off since 2004. Mekuria has no mic and so is a bit quiet (like the rest of the brass section, in truth), wandering around the stage like a drunk grandad while guitarists bounce around him like playful puppies. He later dons ceremonial robes and a headdress, as the crowd are whipped up into an ever greater frenzy and the set ends in a frantic moshpit and a joyous party atmosphere. 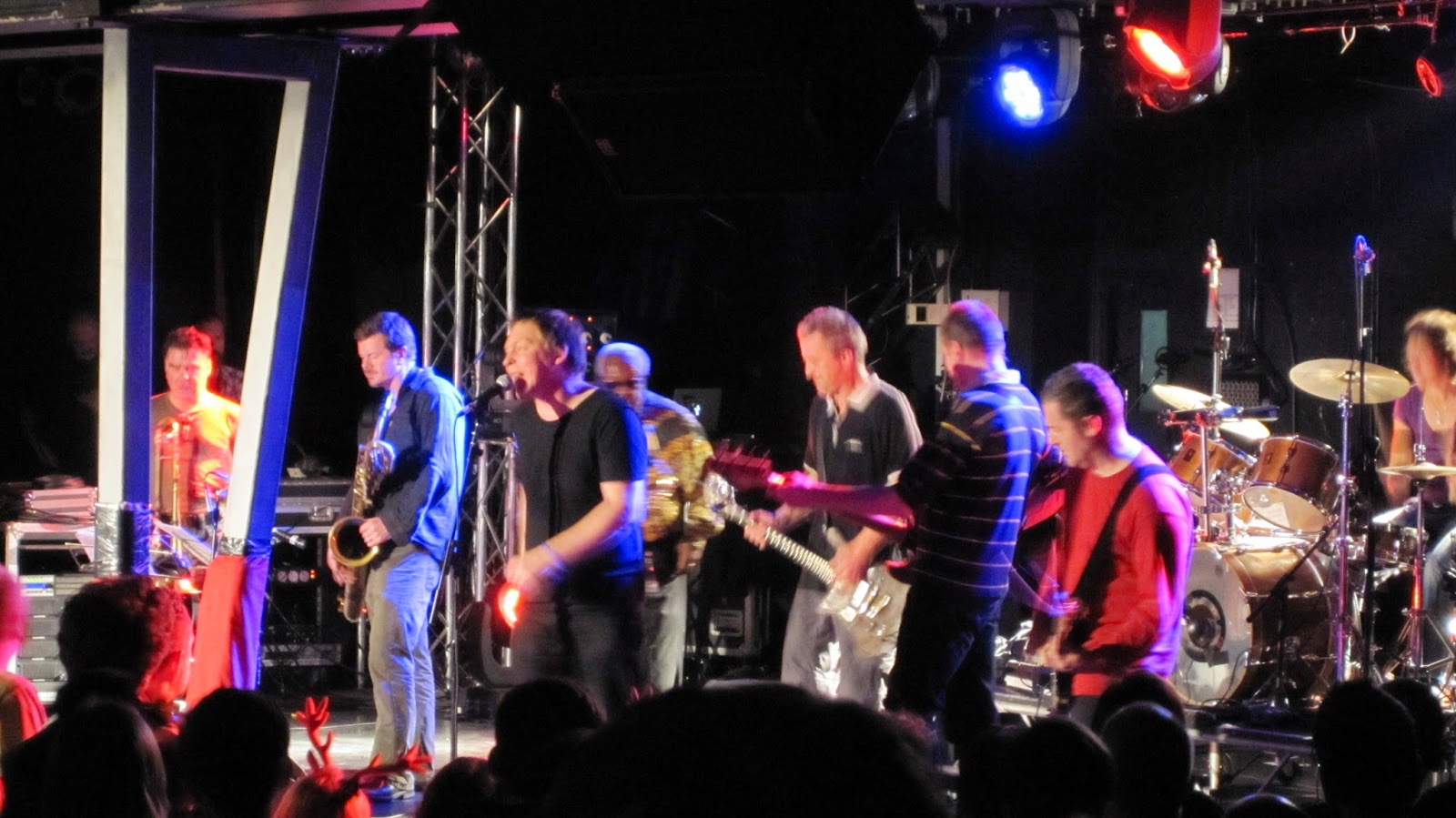 7pm
There are no such scenes over at the Centre Stage. An outfit for whom "flavour of the month" probably applies, TORO Y MOI - actually just Chaz Bundick and some anonymous supporting members - essentially seem to be a wet indie band who happen to have been to a club or two. In that respect, they're not dissimilar to Metronomy - which is to say they're very mainstream compared to what else I've witnessed thus far today. Darker and harder would have been nicer.

7.45pm
Martin recounts overhearing our destructive Dutch neighbours talking excitedly earlier and the words "laughing gas" being used - tonight could be about to get very messy. I mean, we're already semi-drunk and watching the climax of The X Factor, hoping that against the odds the evening's live performance comes from Nissenenmondai.

9pm
Electro duo ROLL THE DICE (Reds) feature a member of Fever Ray and come with the enthusiastic endorsement of Fuck Buttons and Fourtet as well as Caribou. They lure us in Pied Piper style by the sound leaking out of the doors but then tease the crowd by taking an eternity to get anywhere before finally delivering headrush climaxes that are only just good enough to justify the wait.

9.45pm
More electro in the Crazy Horse, this time courtesy of a pioneer of the genre, Simeon Coxe III aka SILVER APPLES. Their processed minimalism may have been hugely influential on krautrock and dance music, but, as much as I cringe at being mean about a 73-year-old, I can't find anything to love. There's a big rush to get in, but after a quick sighting of Coxe's wide-brimmed hat and exposure to his deadpan lyrical delivery, there's an equally big rush to leave. How does ATP like them Apples? Not all that much, it seems. 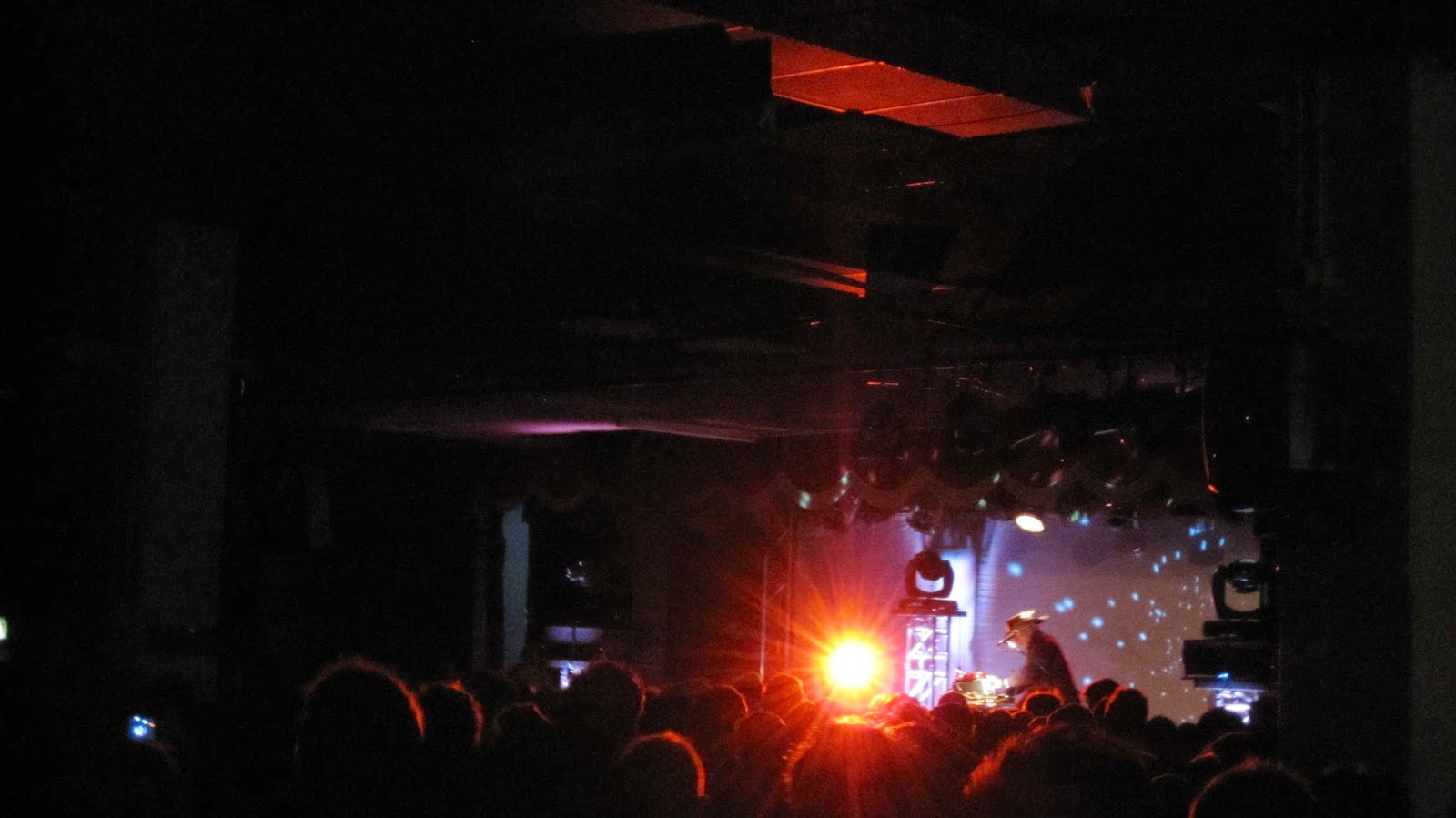 10.15pm
Sadly, things are no better in the Centre Stage, where JUNIOR BOYS' self-pitying 80s synth pop is failing to win over a small and decidedly disinterested crowd. Dispassionate and drab, they never really unleash full dance mode, and I'm left wondering what exactly the point is of a live drummer playing an electronic kit.

10.30pm
While OMAR SOULEYMAN (Reds) certainly couldn't be branded dispassionate or drab, it would also be pushing it to describe him as good. Not that that seems to matter to the raucous mob in attendance, who are apparently only too delighted by the spectacle of a happy-clappy Saddam Hussein impersonator repeatedly doing a karaoke version of the same song. Like Shellac, he's fast becoming an ATP institution - but, unlike Shellac, I can't for the life of me understand why.

11.15pm
A quick return to the chalet brings neither solace nor respite, as I have the misfortune to witness the manner of Newcastle's defeat to Norwich on Match Of The Day 2. Surely the evening must start picking up soon?

11.45pm
Not with FOURTET (Centre Stage), unfortunately. Kieran Hebden proves a big draw, but one boffin and his laptop on that big stage doesn't make for much in the way of visual spectacle and I'm bored almost immediately. 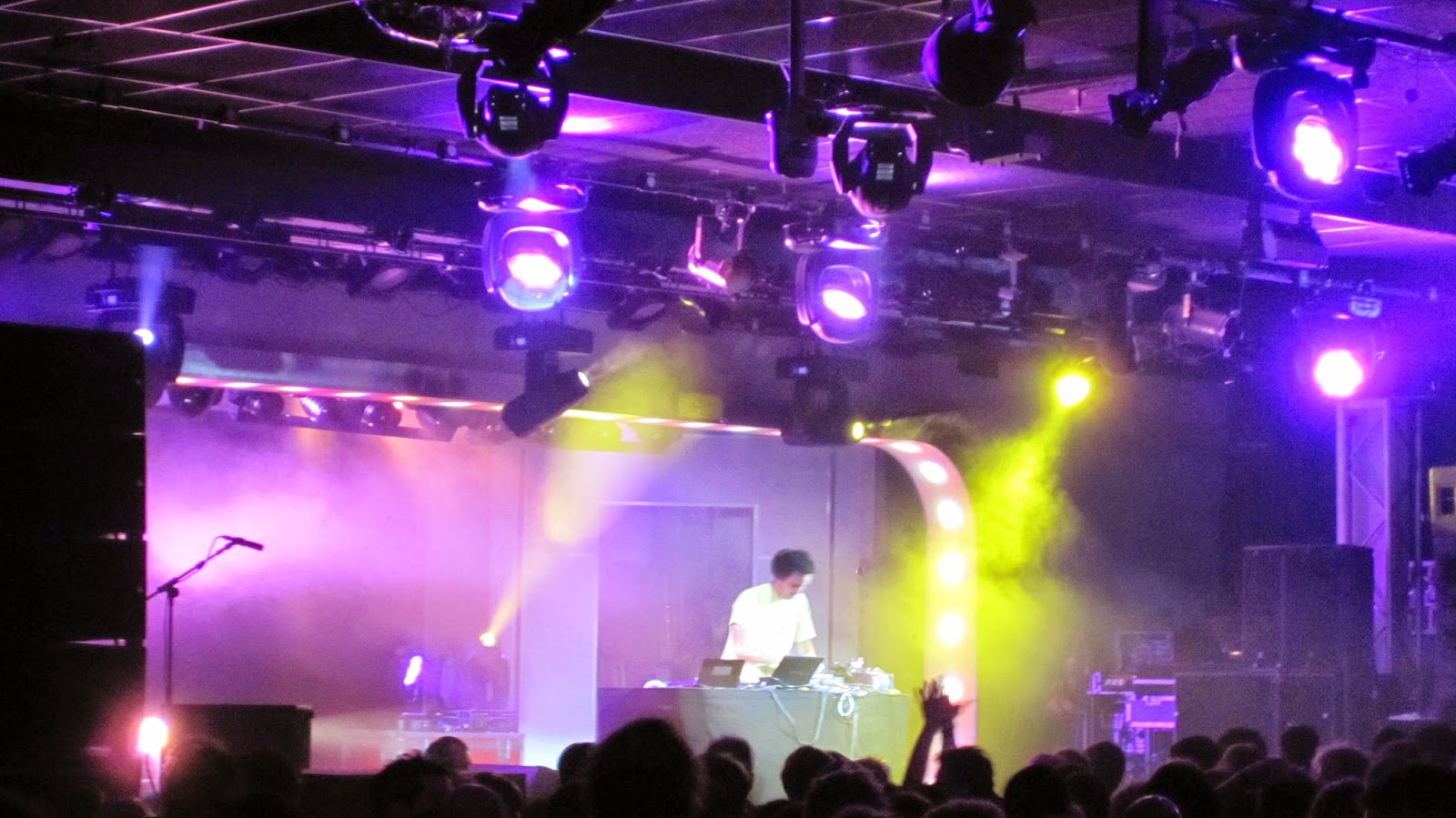 12.15pm
At least FACTORY FLOOR (Reds) are something to look at - or, at least, their backing visuals are, crazy and swirling patterns that are mesmerising and mindboggling at this late hour and to someone whose mind is already feeling boggled by excess of booze and lack of sleep. Their malevolent industrial/techno is bolstered by a live drummer, but they're not as heavy, nasty or punishingly noisy as I'd been led to believe. It's the programme's fault for overselling them. 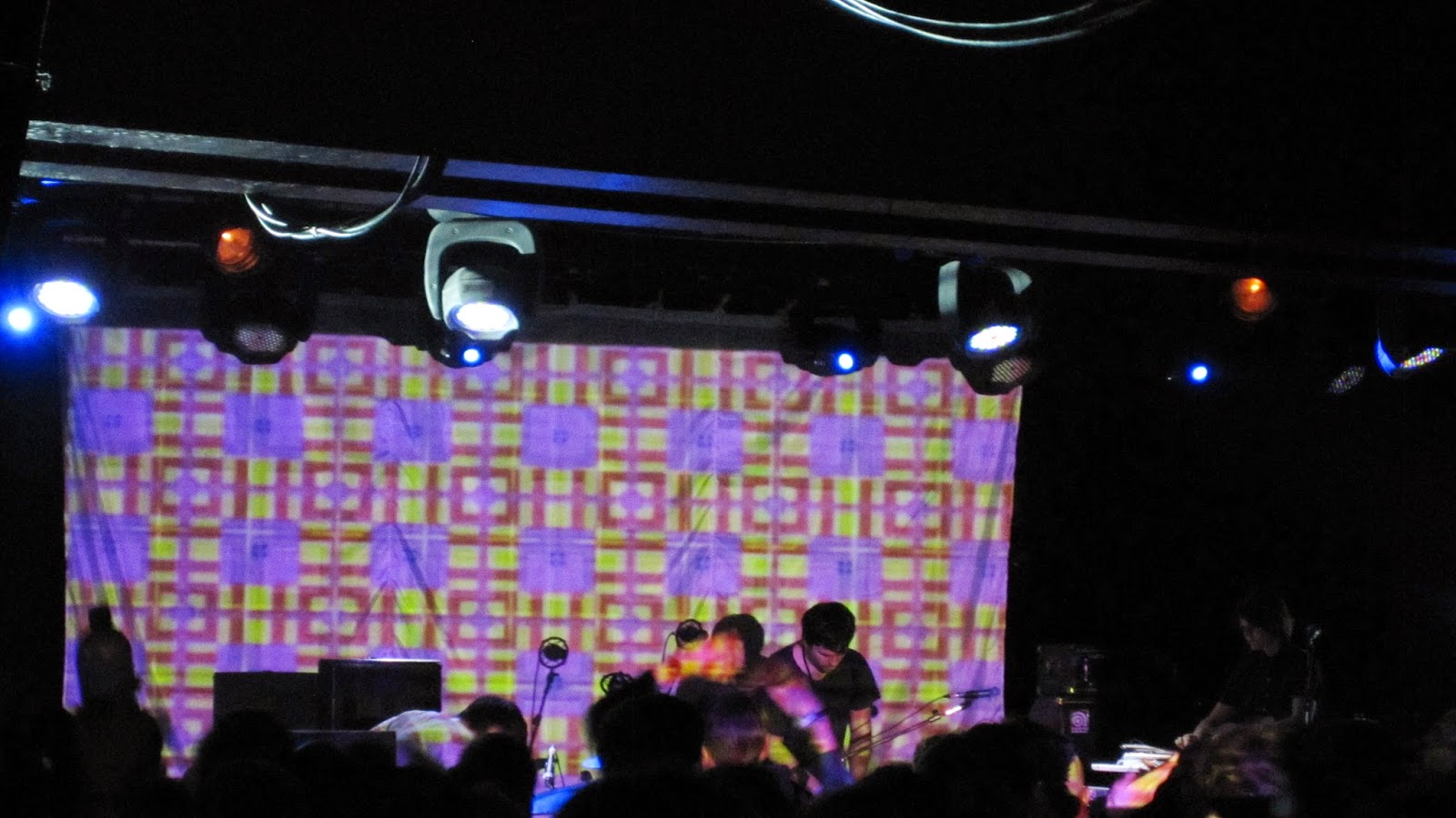 1.30pm
Which leaves Caribou - or, rather, CARIBOU VIBRATION ENSEMBLE (Centre Stage) - to save the day at the last. They duly do so, and in some style, aided and abetted by the likes of Kieran Hebden, Junior Boy Jeremy Greenspan and Sun Ra Arkestra saxophonist and band leader Marshall Allen, who is resplendent in gold jacket and baseball cap while everyone else is in dazzling white. The set is completely different to the early afternoon jazz/noise freakout, with the emphasis firmly on getting limbs waving and heads nodding - a task effortlessly accomplished well before they peak with 'Sun', which ranks as the most intense moment of the weekend. 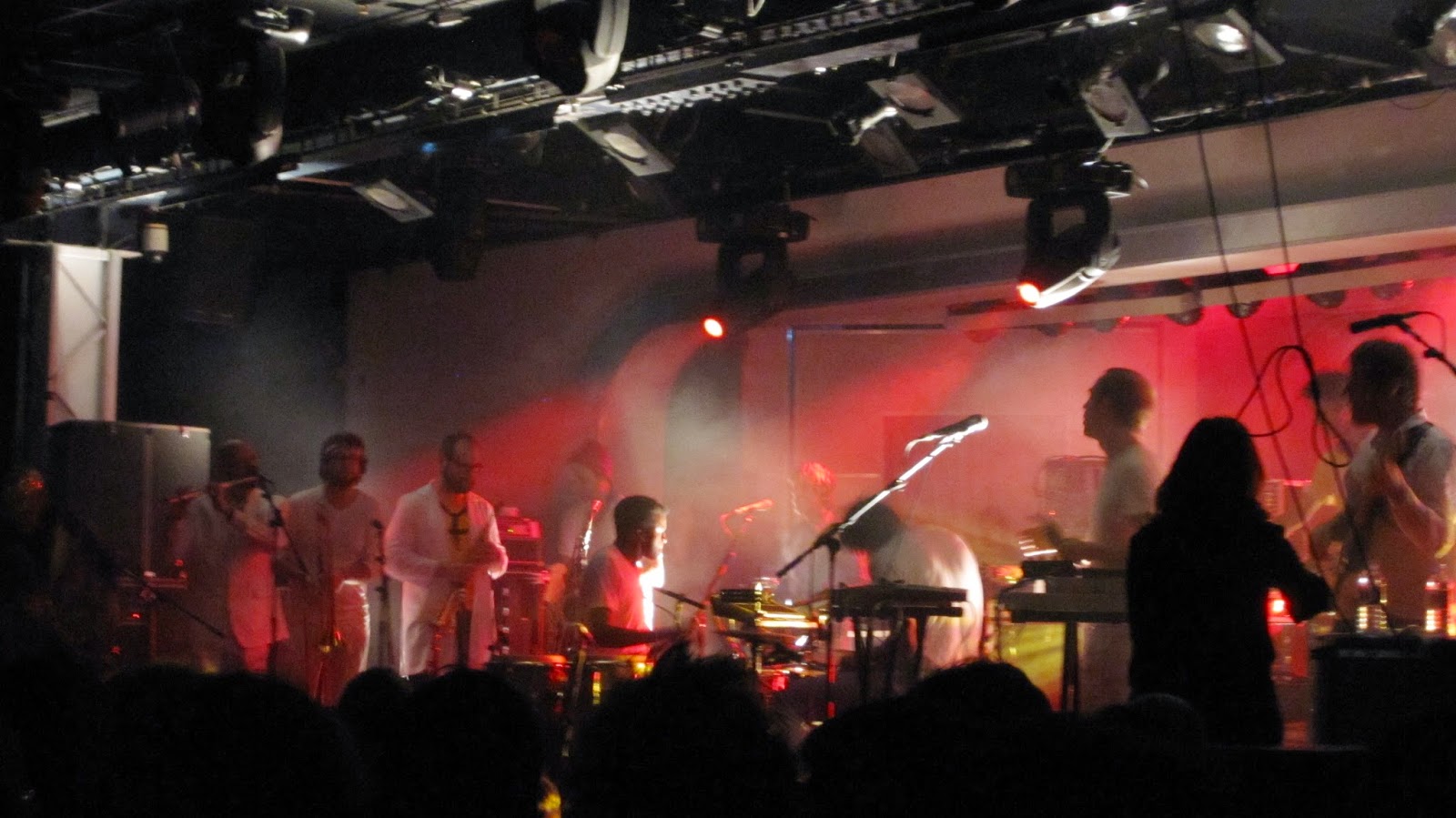 2.30pm
Exhausted and feeling pretty dreadful - but there's not much that fish and chips from Finnegans can't fix.
Posted by Ben at 11:07 AM