11.30am
Slowly coming to, I realise that yes, I really did sleep through Les Savy Fav's headline set last night. My chalet mates are on hand to fill me in on what I missed: Tim Harrington peeling off bodysuit after bodysuit, and everything was covered in tinfoil.

12.30pm
Brian returns to the chalet saying he saw Gary Numan outside his tour bus. Chris: "You'd have thought he'd have a car..."

1.30pm
Late 70s US comedy BJ And The Bear on ATP TV. The bear is actually a monkey. I'm not sure I can cope with this given the scale of my hangover. There's an official history of Newcastle Utd on later. Given the inclusion of The Toon on their curators' reading list, someone in Battles is clearly a fan. (John Stanier, as it turns out.)

3pm
ATP weekends destroy the divide between audience and performers, and it's evident when our curators for the day BATTLES (Centre Stage) make their first appearance that they spent last night partying just as hard as us punters. "I literally threw up right before coming onstage. We love you". Not so much the blind leading the blind, then, as the hellishly hungover leading the hellishly hungover. Not, you might imagine, an ideal time to be assaulted by a technicolour melange of flashing screens, fiddly keyboard lines, heavily treated guitars and vocals and wild incantatory rhythms. But I have a brief moment of clarity during their signature song, the Godzilla-goes-glam 'Atlas', that hints at the merciful recovery to come.

4.30pm
NISSENENMONDAI (Centre Stage) are Battles' current pet band, an unassuming but brilliant trio of very slight Japanese women who take machine-tooled Krautrock via the dark, seedy alleyways of no wave-era New York to the back entrance of Studio 54. Songs unfold unhurriedly, the impeccably taut groove carried along by bobbing basslines that run throughout like a stick of rock. Only once, at the climax of the penultimate track, do they allow themselves to slip the tight self-imposed leash, relieve some of the built-up pressure and tension and indulge in a noisy freakout. It's good enough to make grown men cry - especially if that man is James Murphy. 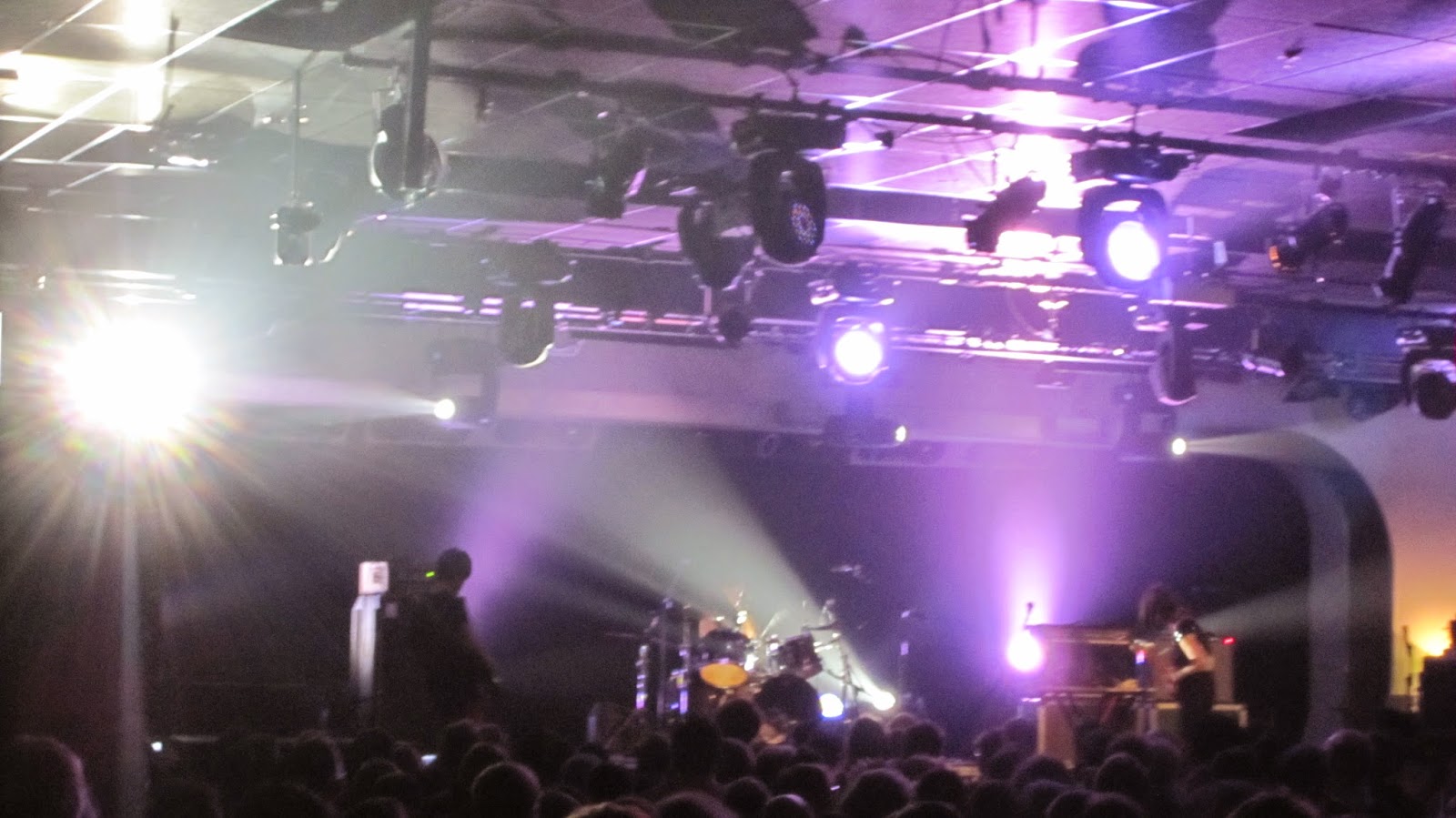 5.30pm
WALLS (Reds) are the inevitable comedown, decent enough drone-heavy electronica with shades of shoegaze roughly in the mould of Death In Vegas. The video projections of various things being sliced up don't exactly cure me of my lingering queasiness.

6.30pm
Back to the chalet for that Newcastle history. It's a procession of greats - Supermac, Keegan, Beardsley, Waddle, Quinn - and, indeed, an instructive guide to ATP goers about how to do ridiculous moustaches and bouffant hairdos properly. Perfect viewing for someone trying to blot out the afternoon's 4-2 defeat at Norwich, another sign our season is starting to slide off the rails. Living in the past, us?

7.15pm
Like Walls, THE FIELD (Reds) call hip Cologne dance label Kompakt home. That may be so, and they may also have an acclaimed album (From Here We Go Sublime) in their back pocket, but it doesn't add up to much in the way of excitement or even interest.

8pm
There can't have been many ATPs that have witnessed the performance of a bona fide pop classic, but 'Cars' undisputably falls into that category. The song's author GARY NUMAN (Centre Stage), no doubt invited along on the strength of his vocal contribution to 'My Machines' on the curators' Gloss Drop, chooses to throw it in early doors, its 2011 incarnation in keeping with the rest of the set in its crunching industrial-metal makeover. On the one hand it's disappointing to see the goth-electro innovator now consciously aping the sound of those he influenced (Nine Inch Nails, Killing Joke, even Rammstein), but on the other his obvious delight at playing for - and being well received by - an unfamiliar audience brings a smile to the face. 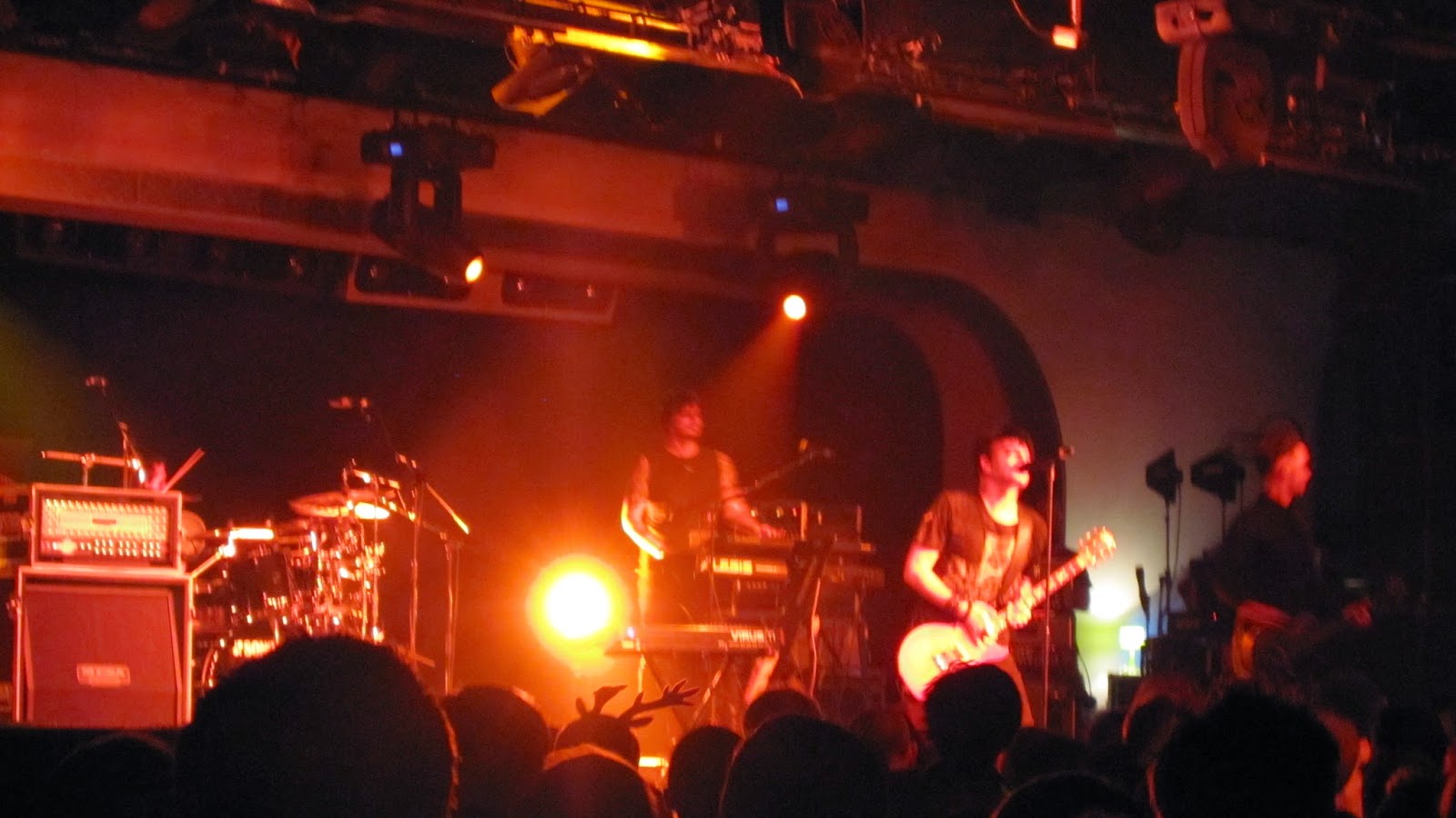 8.30pm
All I know about THANK YOU (Crazy Horse) has been gleaned from the programme notes. The comment that their latest album Golden Worry dips "into the vocabularies of Krautrock, post-punk, no wave and noise" was enough to guarantee my presence at what transpires is their last ever show. It's not hard to understand what Battles might like about the Baltimore outfit's percussive inventiveness and trebly guitar screech, and drummer Emmanuel Nicolaidis is sufficiently talented to win John Stanier's seal of approval. I join Morgan in enjoying a swig of buck's fizz to toast their passing. Thank You, we hardly knew ye - more's the pity.

9.30pm
OK, so I can just about face beer. This calls for a quick blast of Faith No More's Angel Dust on the chalet iPod.

10pm
For a Warp artist who I'd presumed would be way-out-there-and-keep-going leftfield, FLYING LOTUS (Centre Stage) is both much more conventionally dancey (albeit liberally laced with sampled snippets, including Radiohead's 'Everything In Its Right Place') and far less aloof than I'd anticipated, launching himself into the adoring crowd towards the end of his set rather than maintaining any kind of froideur or detachment.

10.30pm
CULTS' place on the bill is a bit of a mystery, but here they are, onstage in Reds, expressing their gratitude to Battles for the opportunity to play. Another fan is Lily Allen, whose label In The Name Of (a Columbia Records imprint) put out their self-titled debut, but there are few admirers among our party for their unremarkable and unexciting indie pop.

12midnight
Ah, BATTLES (Centre Stage), we meet again - this time both feeling slightly more ourselves, though Dave Konopka confesses to still being rough. If John Stanier's mood has been dampened by the afternoon's Newcastle result, then it doesn't show - on the contrary, his band appear to be in high spirits. It helps, of course, that their arsenal boasts the likes of 'Futura' and 'Ice Cream', unclassifiable sugar-crazed party tunes for Pitchfork nerds everywhere. Sadly, there's no Gary Numan for 'My Machines' (presumably he's glued to ATP TV on his tour bus) and the encore is a little bit of a let-down compared to what's gone before, but I'm nevertheless left finally in no doubt as to Battles' merits and in desperate need of Gloss Drop. 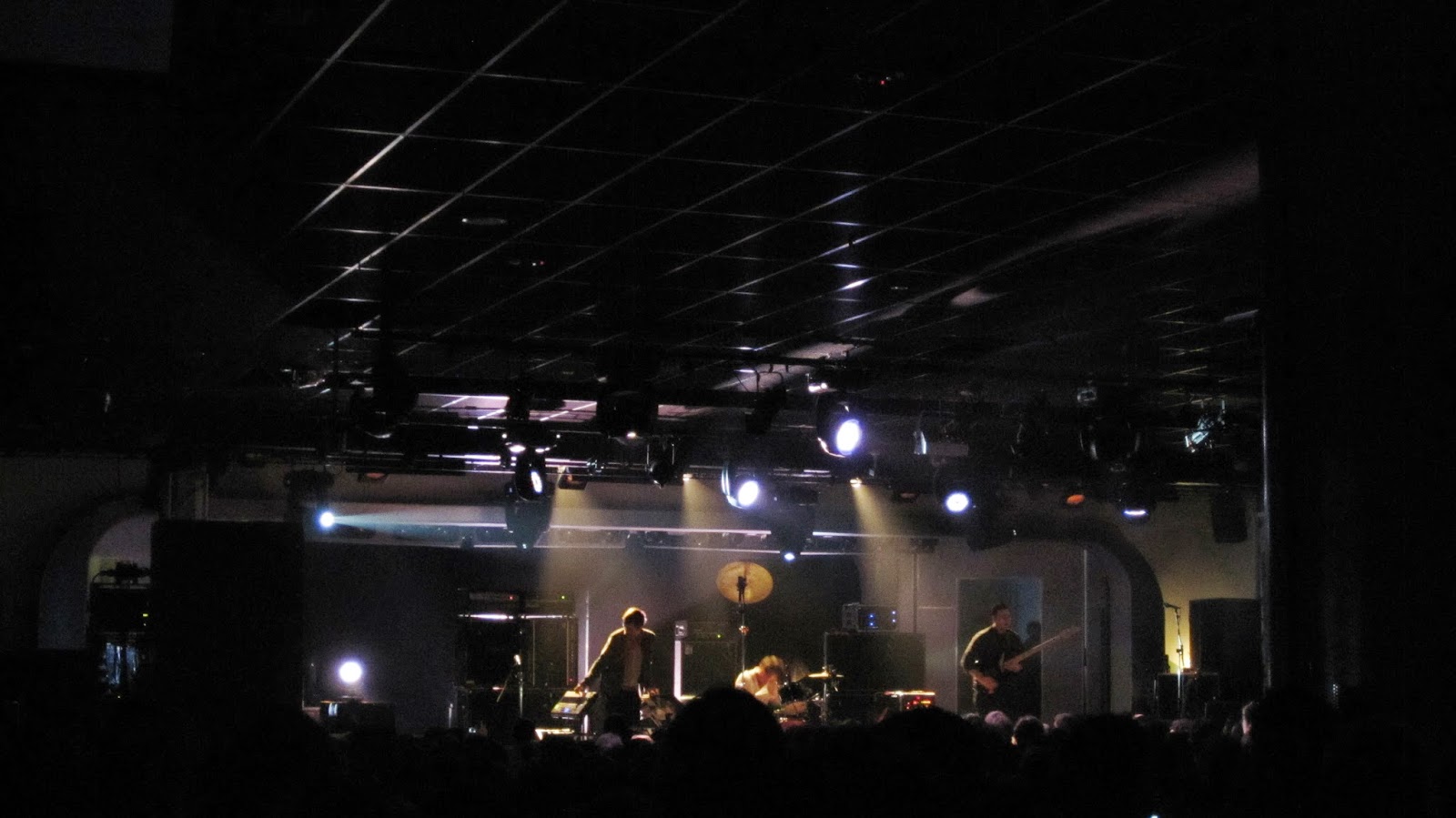 12.45am
Our Dutch chalet neighbours have broken their table. Life round ours is far too sedate.

1.30am
So we could be watching Fuck Buttons DJ but instead we're experiencing DJ KATOMAN (we think) filling the Crazy Horse with cheese of a particularly fine vintage. 'Footloose', 'Beat It', 'I'm So Excited', 'You Can't Hurry Love' (Phil Collins version) - it's like we've fallen through a wormhole and woke up in an 80s teen movie. The Cure's 'Boys Don't Cry' and Devo's 'Whip It' make an appearance, but are swiftly followed/undercut by 'Love Shack' and Toto's 'Africa' to close. Twitter is abuzz with excitement - sample tweet: "Quick! They've turned the irony off in the Crazy Horse!"

2am
Martin's Facebook status: "You better not fuck with Kiss, especially if you're a robot". We surmise he's back at the chalet enjoying dodgy 1978 flick Kiss Meets The Phantom Of The Park.

2.30am
Sod a Japanese DJ playing wall-to-wall cheese, this is even better: Mogwai's STUART BRAITHWAITE DJing in the Irish bar, whipping those in attendance into such a frenzy with a mix of Public Enemy, 'Ace Of Spades', 'Beat On The Brat' and 'I Feel Love' that there's crowdsurfing and a moshpit, and a couple of evidently refreshed gentlemen enrobed in tinsel engage in a bout of wrestling. After the set, I take the opportunity to thank him for his part in getting Codeine to reform. It wouldn't be an ATP without an awkward semi-conversation with an idol, though, would it? 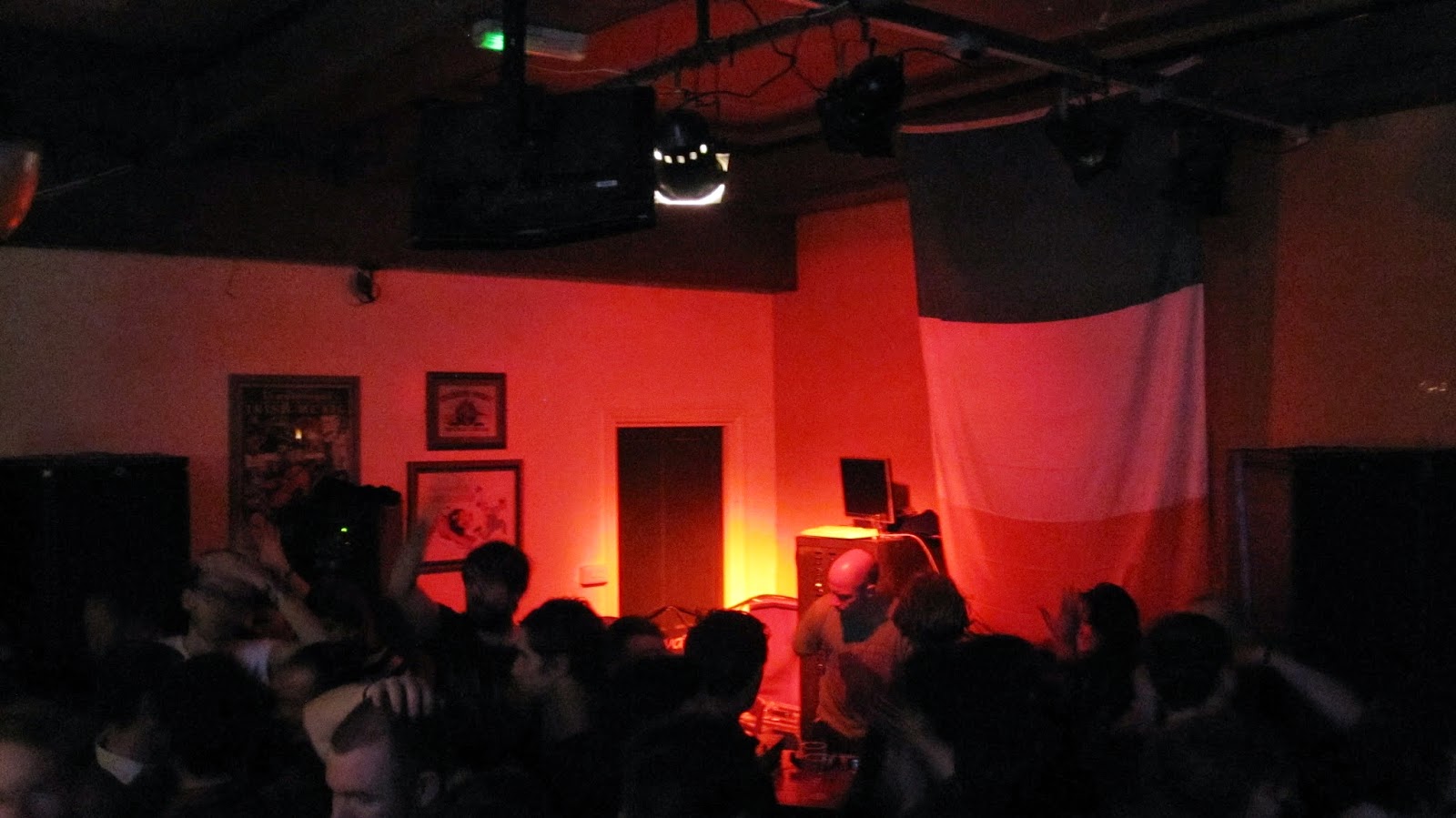 3.30am
Gary Numan's had his turn, now it's another of Gloss Drop's guest vocalists who also failed to show up for Battles' sets: Chilean-born, German-raised producer MATIAS AGUAYO (Reds). Drum-heavy electro/house is probably well suited to this time of night, but we're starting to flag and decide to return homewards - not before Suresh is once again approached by someone assuming he's a drug dealer, though. 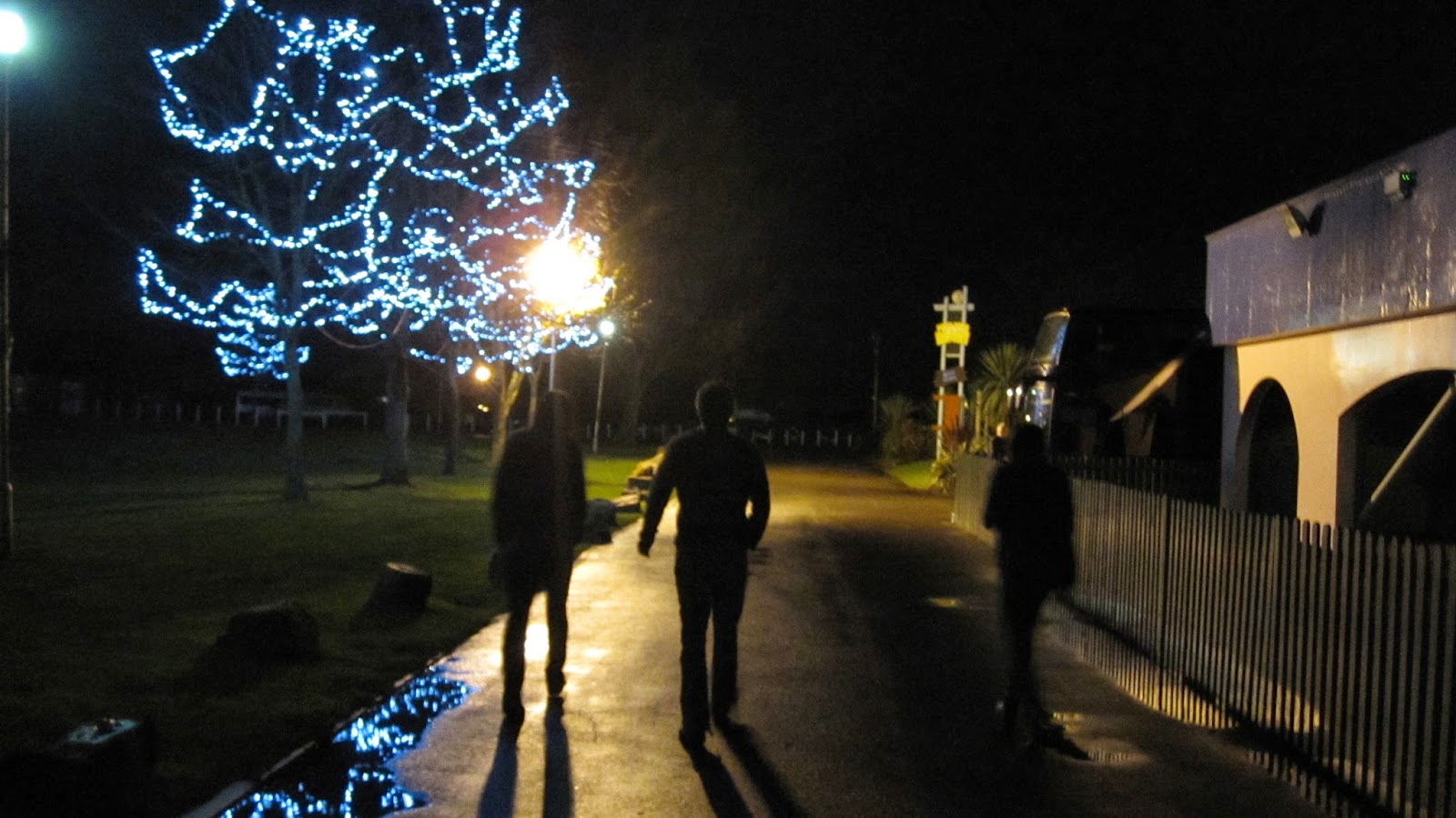 5am
We're winding down nicely when one of our neighbours pays us an impromptu visit. Please don't break our table.
Posted by Ben at 10:35 AM