(The first four parts are here, here, here and here.)

9am
I've occasionally wondered what it might be like to be microwaved. Well now I know. SCORCHIO.

10.30am
How's this for efficiency? We're already all packed up, our stuff securely deposited at the nearest lock-up.

11am
Daf extols the virtues of the painkillers he's on for his knee - at least he's not missing out on the spaced-out Sunday morning vibe of your average punter. As expected, Pulp were last night's Park Stage special guests, while the consensus is that Battles wouldn't have been worth the cross-site trek though Chemical Brothers were OK, if only for nostalgia's sake.

11.30am
If I'd known all it would take to feel vaguely human was a pint of freshly squeezed orange juice, I'd have had one a lot earlier.

12.15pm
It might be after twelve, but that's midday rather than the witching hour, which means that ESBEN & THE WITCH (East Dance) fail to work their sinister magic. In a different context - a medieval dungeon filled with the clanking of chains, for example, or a haunted wood - you imagine that their vogueishly goth blend of primal beats, electronics and noise might be an arresting experience (after all Matador, no less, have seen sufficient potential to sign them up), but right now it's as though The Duke Spirit have endured a sense-of-humour bypass and a botched transfusion with black blood from the Sisters Of Mercy.

12.45pm
By contrast, THE LOW ANTHEM couldn't be much more perfect, their lazy, hazy campfire hymns about smoking yourself to sleep washing over a basking Pyramid Stage crowd like a gentle tide, tickling the feet and invigorating the senses. This is by far their biggest show to date, yet they manage the impressive feat of making it seem incredibly intimate. No grand gestures, no showmanship - just four people huddled around a solitary mic singing 'Ghost Woman Blues'. If we weren't melting before, we are now. Unfortunately, their second set of the day, on the Avalon Stage, clashes with Lykke Li, but Oh My God, Charlie Darwin and Smart Flesh have both been added to my list of must-buys. 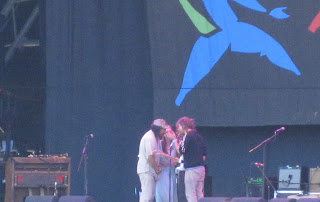 1.30pm
As usual, Sunday seems to have been unofficially designated as Dressing Up Day. Within the space of five minutes I spot men in dresses, a knight in shining armour, a group of suspiciously dishevilled policemen and four Frenchmen, the latter complete with striped tops, berets, onions and full-size cardboard-cutout bikes.

1.45pm
So it turns out that, like us, the US does do bad anthemic indie bands after all. COLD WAR KIDS (Other Stage) seem to be under the misapprehension that the use of piano instantly renders a song meaningful. Not so. Possible worlds theory holds that there may be an infinite number of possible worlds, but in none of them is Maroon 5 doing emo a good thing.

2.15pm
Daf's festival is over prematurely, but at least his knee knack guarantees the VIP treatment on departure, driven off the site by Land Rover.

3pm
Power pop and deliciously sweet harmonies courtesy of two of the UK's finest purveyors of such fare, ex-Gorky's Zygotic Mynci man Euros Childs and Teenage Fanclub's Norman Blake aka JONNY (Park Stage), and the blazing sunshine to match - and yet there's nearly no one (besides me, my massive plate of nachos and three-quarters of Yuck) here to witness what is one of the duo's very first gigs together. It's a testament to their talents that set-closer 'Cave Music' can be accurately described as a prog-folk odyssey featuring liberal use of flute and sax, but isn't remotely as offensive as that might sound - quite the opposite, in fact.

3.30pm
The Park's massive sperm sandsculpture has mutated overnight into a massive baby sandsculpture. Only natural, I guess. 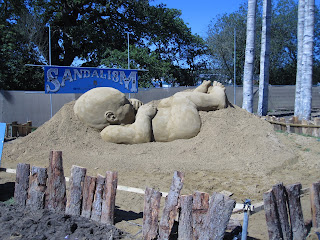 4.30pm
As the name suggests, BOMBAY BICYCLE CLUB (Other Stage) are a British indie band but not parochial, happy to crib from the Cribs' US guitar rock influences but also, somewhat more cynically, ape Vampire Weekend, wheeling in the London Afrobeat Collective in a bid to steer themselves away from the landfill site. Still, this is (perhaps remarkably) the first time I've clapped ears on them, and The Youth seem to be united in their approval, so that's my bah-humbugging drowned out.

5.15pm
A fetching item of headgear fashioned out of beercans deserves a nod of approval.

5.30pm
Elsewhere on site, I gather that The Joy Formidable have failed to live up to their name, appearing half an hour late only to then be beset by sound problems. No great loss, people.

6pm
Ever since TV ON THE RADIO (Other Stage) first surfaced, critics have been confounded in their attempts to pigeon-hole them. Art-rock? Post-punk? Electro-indie? Avant-garde funk? No one shoe fits. Maybe it's just the fact that I've not seen them live before, but I would never have thought they could be justifiably categorised as festival party-starters. Only a couple of months have passed since the tragically premature death of bassist/keyboardist Gerard Smith from lung cancer, but the Brooklynites aren't here to brood but to celebrate with a sparkling set in which fan favourites 'Young Liars' and 'Staring At The Sun' are prominent. Dave Sitek has clearly drunk a deep draught of Glastonbury spirit, judging by the wind chimes dangling from the neck of his guitar, while bushy-bearded Kyp Malone looks as though he may have been living in a ditch on site for the past year. None of which quite prepares us for the closing finale of 'Wolf Like Me' and 'Ghostbusters' - yes, you read that right - which is immediately up there with this year's finest moments. 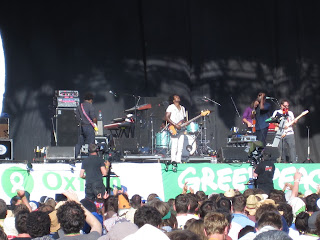 6.30pm
Dan turns up wearing a Wombles mask and making the Wu-Tang Clan symbol. Meanwhile, I'm wondering whether I'll regret not slathering my right knee in suncream given the large rip in my jeans.

6.45pm
I'm gently barged in the back as what sounds like an argument flares up behind me. The sun's out, we're at Glastonbury - whatever happened to peace, love and happiness? Turning around, though, I find myself in the middle of an impromptu film set, a bunch of amateur movie-makers shooting a scene for a flick about a girl in a burka who has hitch-hiked to the festival.

7.30pm
E at Glastonbury? A cliche. But not this particular E, aka Mark Everett aka EELS aka quantum physicist's son aka man who once purposefully styled himself on the Unabomber aka author of some of the most deceptively simple yet unbearably poignant songs you'll ever hear. Rocking a waistcoat, flat cap and prodigious Kyp Malone-esque beard, he's here to rock out - a relief, assuaging any fears I may have had that he would dwell on his recent trilogy (sub-par and a bit dull by his own extremely high standards). As with Eels' predecessors on the Other Stage, we're treated to a witty whirlwind through the band's back catalogue - 'That's Not Really Funny' is, y'know, funny and a strings-free reinvention of 'Fresh Feeling' is, y'know, fresh, but it's the treble-whammy of 'Novocaine For The Soul', 'Souljacker' and a frantic thrash through 'I Like Birds' that steals the show. E, who, at least in the early days, poured so many of his tragic early experiences into song, is in a cheerful mood, introducing his drummer as having three likes - "Chips, bangers and mash, and singing songs about himself" - before declaring "I'm really happy ... in my pants". Perhaps I shouldn't be admitting this, but the feeling's very definitely mutual.

8.30pm
Enjoying the Glastonbury experience rather less than E is LYKKE LI (Park Stage), who stroppily complains "I can't take this - you're all just standing there still" with the air of someone about to throw a hissy fit and flounce off early. But she doesn't, thankfully, and her divaish attitude can't detract from a third superb set in succession. The Swede is a part-time model and her music is suitably stylish, slick and slinky. If Esben & The Witch drag Bat For Lashes out into the woods at night, then Lykke Li pushes them more successfully into the pop arena, albeit with enough percussive invention, lyrical despondency and knowing nods to the past to appease your average indie fan. 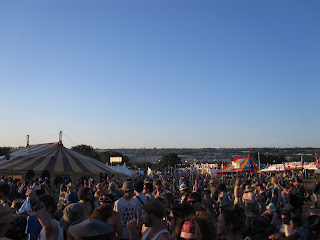 9.30pm
Back at Base Camp, a whiff of Kaiser Chiefs wafts over from the Other Stage. Gareth: "To be fair ... they're shit". Conor, meanwhile, is busy dressing up like something out of Tron for reasons best known to himself.

11pm
"Let's go out with a bang." Yes, let's. I could be watching Beyonce right now, but the instant QUEENS OF THE STONE AGE (Other Stage) kick off with their festival anthem rival to Elbow's 'One Day Like This', 'Feel Good Hit Of The Summer' - no less brilliant for all its predictability - I'm 110% I made the right choice. With no new album to promote, Josh Homme has decided to allow fans to select the setlist. It's never wise to trust the British public to do the right thing, but in this case they can't be faulted: 'The Lost Art Of Keeping A Secret', 'Burn The Witch', 'First It Giveth', 'You Think I Ain't Worth A Dollar...', 'Little Sister', 'Go With The Flow', 'Better Living Through Chemistry', 'Song For The Dead'... The band are revelling in both the circumstances and the gathering darkness, and, having enjoyed what was previously their finest hour on British soil nine years ago when they (and Dave Grohl) unveiled Songs For The Deaf before an open-mouthed audience, it seems fitting that they should surpass that performance on the very same stage. "I don't want to sound like a dick, but let's go off so hard Beyonce feels it in her bones", Homme proposes before the open invitation to air-drum like a maniac that is 'No One Knows'. Yes, let's.

11.45pm
Over in the Cabaret Tent, ANDREW MAXWELL is going down like a lead balloon with a puncture. It's  standard lowest common denominator stuff: sweariness, a routine about ball-licking, the comment that "We men have made a mess of running the world - we need women to clean up, as usual". I'm assured the awkward atmosphere is actually an improvement on what it was five minutes ago, though, when Maxwell was facing down a persistent heckler. Time to duck out.

12.45am
There's just enough time to join the party at the Stonebridge Bar for a bit and drink some donated wine. Entertainment comes courtesy of Gav - someone who struggles to communicate at the best of times, and who is currently very, very drunk - trying to explain the A-Team in German.

1.45am
Bags collected, we set off on the long slog towards the car park. On the way we pass two people wearing nothing but aprons and a disco in a Portaloo. Where else but Glastonbury? We're going to miss it next year.
Posted by Ben at 10:15 AM