(The first part is here.)

10am
Oh hello there, hangover from hell. Even fresh orange juice proves no remedy, I ruefully observe, as I lustily spew up lurid liquid and with it my remaining dignity. Incidentally, it's also raining again.

12noon
A flag near us proudly proclaims "Philip [sic] Schofield is my BITCH", and who are we to argue? We're too busy discussing the day's choice of entertainment - is it to be Mexican wrestling or salsa (the dance, presumably, not the foodstuff)? 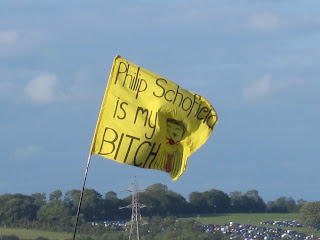 2pm
Up at Stone Circle the mud is now drying out and the Green Police are out on patrol in full force, embarrassing those engaged in acts of illicit micturation. 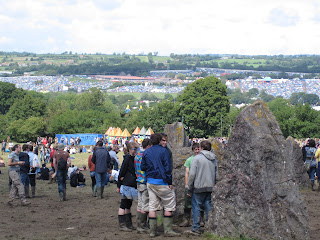 2.30pm
The hangover continues to malinger, so heading for the Healing Fields seems a sensible decision. But I don't succumb to massage, meditation, reiki, homeopathic remedies or suspiciously violent-looking osteopaths, instead preferring to aid my rehabilitation with a delicious chilli-sauce-laden falafel from the same place that I've frequented at Green Man before. Watching whittling, I realise I don't feel any inclination to stab myself with the pointed wooden implements produced - definitely on the slow road to recovery, then. 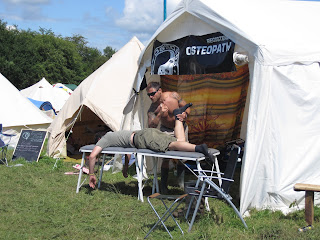 4pm
Spiritual doorbells for sale. Ah yes, always thought there was a gap in the market there. 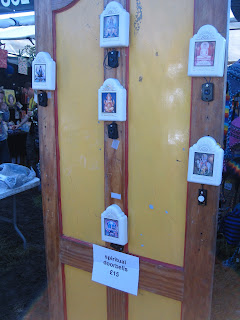 4.30pm
Mel recounts her uncomfortable, awkward experience at a yoga session in the morning. It's not supposed to be hands-on, is it?

5.15pm
Jen and I go one better than yesterday and spot the actual married couple from that episode of Don't Tell The Bride. Shortly afterwards the South Walian lovebirds accosted by a pair of grinning idiots telling them how much they liked their festival-themed wedding (and I've not even got the vague excuse of being drunk). To their credit, our victims smile politely and say thanks. At least our behaviour isn't quite as ridiculous as the bloke who walks past with a two-litre bottle of Strongbow gaffer-taped to each arm.

8pm
Time for the annual Glastonbury meet-up with blogging buddy Swiss Toni and friends at the cider bus. The evening starts here.

8.30pm
Completely by chance, I find myself stood next to another couple of familiar faces from Nottingham. One quick catch-up later and I've learnt about the perils of trying to put up a two-minute tent in a slight breeze - namely, that it might blow over a hedge and out of reach...

9.30pm
With the Mexican wrestling going on elsewhere, Oxford friends Tim and Nicky have now joined us. Last year Nicky was eight months pregnant, so she can be forgiven for taking the opportunity to get heartily stuck into Burrow Hill's finest - and it would be rude of us not to follow suit.

11pm
Central among the survival skills of the seasoned Glastonbury-goer is the ability to shut off the sense of smell and to avoid inhaling the steam billowing up from hot fresh piss in the urinal trough.

12midnight
Carrying on where I left off at last year's Green Man, I pass up the chance of a Pieminister and instead make a beeline for Pure Pie, whose steak and horseradish concoction is a sure-fire winner.

1am
Cubehenge is lively but disappointingly the Motown set in the Dance West tent has been cancelled. It soon becomes clear why, though - the whole area is a warzone, the mud having dried to a stickiness equivalent to superglue. As revellers pile up at narrow intersections, a member of security staff helps free one bloke, only for him to leave both shoes behind in the clutches of Worthy Farm's terra infirma. I will get you in the end, it seems to say, even if it's item by item of clothing. 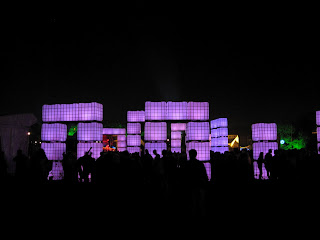