Reasons To Be Cheerful Part II

(If you're wondering what this is all about, click here.) 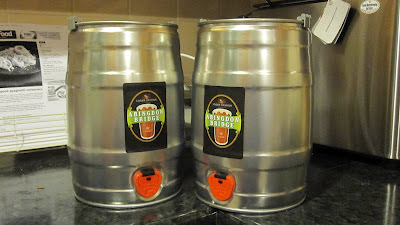 If, as has been suggested recently, the UK is falling out of love with lager, then the same can't be said of ale. The proliferation of microbreweries starting up all over the place is a heartening trend, even if the statistics on closures of pubs to stock them make for depressing reading.

Abingdon was once home to the Morland brewery, best known for Old Speckled Hen. Morland was bought up by Greene King in 1999, though, with production switched elsewhere in 2000. The brewery itself has been turned into overpriced flats and all that remains is the old pub. Since 2010, though, the town has had a new microbrewery to be proud of: Loose Cannon.

The brewery, situated on a small non-descript industrial estate to the south-west of the town centre, was founded by Will Laithwaite, for whom working in the drinks industry runs in the blood - he's from the Laithwaites wine dynasty.

Their first offering was Abingdon Bridge, a flavoursome richly coloured ale that remains my favourite. Other ales have followed: Dark Horse, a dark beer that's a bit more of an acquired taste; Pale, a light and easy-to-drink summery ale; a special edition Christmas beer; and now Bombshell, the most recent addition to the stable.

Loose Cannon's beers are being sold by an increasing number of local pubs, including (appropriately enough) the old Morland Brewery Tap. Apparently Laithwaite was having trouble getting them to sell Dark Horse simply because Abingdon Bridge was proving so popular that they were worried about taking it off! The beers can also be bought directly from the brewery for home consumption - and let's face it, the eight-pint mini-kegs are pretty darned cool. They'll give you a sample to taste (a very generous one, if my third of a pint of Pale was anything to go by) and, if you ask nicely, you might even get a quick tour of the premises.

Credit to Loose Cannon for crafting a selection of excellent antidotes to the horrid bland fizziness of mass-market cooking lagers.
Posted by Ben at 10:37 PM