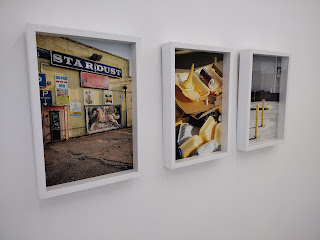 How better to view Jon Pountney's exhibition Wales At The Seaside at Cardiff's TEN than in the company of the photographer himself, enjoying his commentary on the individual images as well as the project as a whole?

Portraying himself as a flaneur armed with a Nikon, Pountney confesses that his practice primarily consists of wandering with an open mind in search of arresting scenes and serendipitous moments. This particular project took shape as many of his do - organically rather than programmatically, starting with a handful of pictures and gradually coalescing into a substantial body of work over a number of years.

As he told the BBC, he (like so many of us) finds himself irresistibly drawn to the "nostalgic confection" of seaside towns, which assault all of the senses at once and stir up childhood memories. While he's concerned not to "glamorise destitution", he is nevertheless especially fascinated by faded resorts in the close season.

Pountney identifies as an artist rather than as a documentary photographer, and there's certainly a poetic quality to many of the images on display. Martin Parr's (in)famous pictures of New Brighton collected in The Last Resort are remarkable in part for the rubbish strewn everywhere - but Pountney manages to make an abandoned ice cream, an empty can of Dr Pepper and a mass of polystyrene chip trays in an overflowing bin seem almost beautiful.

In that, he's aided and abetted by gorgeous light - and not for the first time. The stunning photo of a lone sunbeam illuminating one of the pavilions at Whitmore Bay on Barry Island was exhibited as part of the Waiting For The Light show at Chapter in 2020 but makes a very welcome reappearance here, while a fellow attendee astutely points out that the picture of a brightly lit ice cream stall at Porthcawl, captured as dusk turns to dark, is reminiscent of an Edward Hopper painting. While not morally opposed to post-production tweaks, Pountney prefers to let nature take its course and to work with whatever magic comes his way.

While he predominantly depicts the Welsh coastline as a manmade environment (there are surprisingly few glimpses of sand or sea), people are - as in his COVID-19 zine - largely conspicuous by their absence. Someone asks whether this was a conscious choice. The answer is revealing: he submitted 400 photos to gallerist Catrin Gardiner, from which she picked those that make up the exhibition - so it's her tastes and interests that have shaped what we see. Another curator might have made a very different selection from the same set of pictures - there are, Pountney suggests, several other potential Wales At The Seaside exhibitions in there. Here's hoping that they too get their time in the sun.