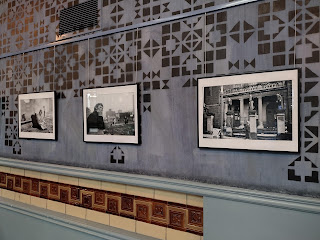 Having Tish Murtha's images in books on the shelf is all well and good, but when the opportunity arose to see a selection of her best hanging on the wall, I couldn't resist. Hence yesterday's whistlestop trip into Manchester city centre to catch the exhibition A Woman's Work, which opened on International Women's Day (8th March) and runs until 30th June.

In stark contrast to their site of display - the spectacular, opulent Refuge bar in the Kimpton Clocktower Hotel on Oxford Road - Murtha's pictures were taken in Elswick, the deprived area of Newcastle in which she was born and to which she returned after graduating from David Hurn's documentary photography course in Newport. That personal connection comes across clearly in her sympathetic portraits of siblings, friends and strangers, living amid the wreckage of a broken social system.

Murtha's focus on kids is striking. As with many of the pictures in Nick Hedges' Home, those chosen for display here are poignant in the way that they show their youthful subjects as victims of circumstance. These childhoods are not pregnant with possibility; on the contrary, the bleak future that they face is already mapped out.

The only real hope, Murtha seems to suggest, lies in the bonds of camaraderie and community - something that Anne Worthington also recognises in her work, which brings the issues of decline and regeneration closer to home for local visitors through its focus on East Manchester. Worthington's images may be in colour rather than black and white, and taken two decades after Murtha's, but they are animated by the same tension between togetherness and disintegration - portraits of people and places abandoned and in imminent danger of being swept away in the name of a form of "progress" from which they would not benefit.

All credit to the wonderful British Culture Archive for staging the exhibition and continuing to promote the work of Murtha, Worthington and many, many others. Hopefully, it won't be long before the organisation has permanent premises - a dream you can help to realise through buying prints or simply making a donation to the coffers.