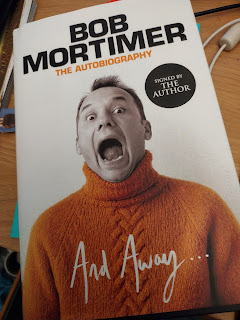 Whatever it is that qualifies someone for genuine national treasure status, I think it's safe to say that Bob Mortimer has now achieved it. And, curiously, he's done so without his long-term partner by his side, now held in greater (and certainly wider) public affection for Mortimer And Whitehouse: Gone Fishing and recurrent appearances on Would I Lie To You? than for the comedy double act with Vic Reeves that brought him fame.

And Away... only seals the deal. Less laugh-out-loud hilarious than you might perhaps have expected of his autobiography had it been written a few years ago, on the whole it's more in the vein of Gone Fishing: gentle humour, frank self-examination, poignant recollection, bruised honesty.

Bob (referring to him as "Mortimer" feels wrong) was just seven when his dad died in a car crash, and he claims it was "the single most defining moment of my life". Arguably, though, the emergency triple heart bypass he underwent in 2015 has come to assume a similar significance. Not only was it the prompt for Paul Whitehouse to invite him to spend some time larking about on riverbanks (latterly with TV cameras in attendance), but it spurred a period of self-reflection and a changed perspective on life - as well as inspiring the slightly unusual structure of the book.

The first part flits between Bob's formative years and his heart diagnosis and subsequent operation and recovery, before the book moves on to a linear narrative of his rapid if unconventional rise to TV fame and on to his post-surgery recovery, concluding with chapters dedicated to his wife, Vic and his beloved mum.

Bob emerges from the book's pages as a painfully shy perennial prankster with few close friends, a daft lad who secretly struggled with depression but who had the good fortune to stumble across a fast track to stardom. The idea of going from randomly attending an upstairs-at-a-pub gig, to joining the star onstage, to moving to a bigger venue, to scoring a TV series thanks largely to the patronage of Jonathan Ross in the space of just a few short months is practically impossible to imagine now - not so in the heady days of the late 1980s/early 1990s. Nevertheless, his career trajectory should give hope to anyone who feels themselves to be mooching around directionless - as he recounts, he had plenty of false starts on the ladder of life before finally finding his calling, albeit almost by chance.

Bob's partnership with Vic is in some senses a double-edged sword, in that it both brought him to public attention but could (and indeed perhaps did) stifle his own creative impulses. And Away... affirms the fact that Bob has now escaped Vic's shadow, and can be acknowledged as the more naturally funny of the two (not that it's a competition).

If there's one reason to regret the book's existence, it's that it might curtail his appearances on Would I Lie To You? Even then, though, he confesses to having thrown in a few fibs to liven things up, and hopefully he's kept plenty of anecdotes back for future use.