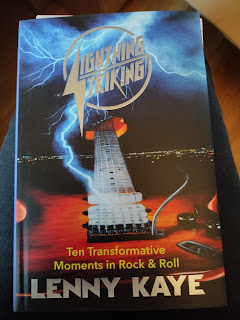 At first glance, the premise of Lightning Striking has the distinct air of provocative, clickbaity listicle about it: the tale of rock & roll boiled down to “ten transformative moments” in ten (well, eleven) urban epicentres, from Cleveland in 1952 to Seattle in 1991. But in Lenny Kaye’s hands, it’s a rich and stimulating read – a journey through time and place narrated by a beat historian with an encyclopaedic knowledge of, and boundless passion for, his subject.

“I’ve always been drawn to a scene”, Kaye enthuses in the Introduction, “its shared togetherness, its come-hither weave, its stars, its character actors and bit players. To feel the adrenaline rush of excitement and possibility as convergence coalesces into where-it’s-at.” He’s often writing not merely as an expert witness but as an eye-witness – someone who, as Patti Smith’s guitarist, was at the heart of the CBGBs scene in 1970s New York; who opens the chapter on UK punk recalling watching Zulu round Mick Jones’ flat; who, as a record producer, was passed a pre-Nevermind Nirvana demo.

The “moments” of the subtitle is slightly misleading; the book is arguably as much about the cultural momentum that culminates in rock’s great leaps forwards as it is about those leaps forwards themselves. As Kaye underlines, the Beatles’ story didn’t begin in 1962, and neither did Never Mind The Bollocks spring up out of nowhere.

In a “world of immediate gratuity” globalised by technology, Kaye briefly ponders whether such transformative moments and the vibrant, independent, localised music scenes that birthed them might now be a thing of the past. If so, then Lightning Striking is an evocative epitaph.

(An edited version of this review has been published on the Buzz website.)