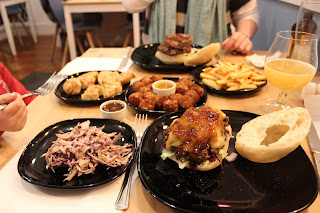 Central to the "Preston Model" - a political and economic strategy gaining traction as a means of resuscitating ailing towns - is the concept of "community wealth building", according to which as much local money as possible should be pumped back into local businesses. Canton is hardly ailing - far from it - but it does seem that Bwydiful, the new gourmet burger joint that's taken up residence on Cowbridge Road East, is very much operating on the same principles. Their beer is brewed just across the train tracks by Crafty Devil, while their buns are baked at Pettigrew next door.

On a bitterly cold evening, we're grateful to find our table stationed ideally next to both a large radiator and the bar. It might be midweek in the depths of January, but a number of diners are already ensconced in the restaurant's bright, colourful interior. The street-food supremos took their time readying the premises, with the opening delayed until December - but is it worth the wait? In a word, yes.

A criss-cross tower of crispy halloumi fries get us off to a flying start, the deep green chimichurri dip narrowly edging the chilli jam as our preferred accompaniment. Hash brown bites prove even more moreish, especially by virtue of being paired with a fruity, sweet dunking sauce.

The Hawaiian burger boasts a wheel of lightly singed pineapple atop a slice of bacon so thick it's practically a gammon steak. However, that's trumped by the Caws Caws, whose patty is crowned with a generous, oozing dollop of Welsh rarebit - its mustardy kick nicely offset by Bwydiful's own rich, gloopy barbecue sauce. To even dare to call it a cheeseburger would be a gross insult - it's far, far superior to that.

Of the aforementioned local produce, the ciabatta rolls are beautifully soft yet pleasingly robust, while allowing co-owner Jon to talk me into a pint of Orange Juice Blues - fresh, citrusy but still unmistakeably ale-y - is certainly not something I regret. Indeed, aside from a bit of pinkness to the patties and slaw that wasn't quite so aggressively peppery, there's little else that we would ask for.

Attempting to establish a permanent home can be a precarious business for pop-ups - Got Beef's sadly short-lived presence at the other end of Cowbridge Road being a case in point. But for Bwydiful, Victoria Park feels like right time, right place; together with Pettigrew, the Dough Thrower, La Creperie de Claudie, Bloc and a soon-to-open Italian, it's at the heart of an emerging foodie hub to rival anything found in Pontcanna.

(An edited version of this review appears in the February issue of Buzz.)
Posted by Ben at 8:12 PM