11am
Dazed and confused. Confusion not helped by the mysterious lack of rain. Is it genuinely sunny, or is this some cruel trick?

11.30am
Green Man: the sort of festival that can play host to Fuck Buttons but also to a middle-aged couple diligently washing up their cafetiere.

12noon
There's a wasp in the Haribo. It's like the twenty-first century equivalent of a fly in the ointment.

12.30pm
It's unanimous - all of us who saw Animal Collective last year, whether at Glastonbury or here in the Brecon Beacons, concur that they're seriously, painfully, excruciatingly godawful live.

1pm
What lengths I'll go to to follow up on a recommendation - like travelling to Wales to catch a band usually found on my own Oxfordshire doorstep. MESSAGE TO BEARS (aka multi-instrumentalist Jerome Alexander, essentially) would have suited the Far Out Stage's previous incarnation as the Folkey Dokey Stage. Their ambient folk, hinting quietly towards post-rock expansiveness, relaxes rather than ruffles and makes for a very soothing, civilised introduction to the day.

1.30pm
We manage to coordinate a meeting with James and Lyndsey, old friends from Splott who two years ago sold up and bought their own plot of paradise in the hills north-west of Swansea. Apparently Emmy The Great and Cerys Matthews are among those following their tweets about trying to live the Good Life, growing their own food and living in a yurt while protracted planning permission wrangles are resolved. The site, they say, recently played host to an anarchist's 40th birthday bash, with music provided free of charge by Cardiff folksters Evening Chorus, who had themselves been eager to visit. Anyone else smell the beginnings of a festival?

2pm
There's nothing much bestial about JE SUIS ANIMAL (Far Out Stage), the Norwegian/Anglo art school outfit peddling a brand of svelte, urbane indie pop that recalls Stereolab and The Concretes while gesturing in their occasional louder moments vaguely in the direction of My Bloody Valentine. It's all pleasant enough, but my attention is nevertheless deflected by the realisation that I'm missing out on the Scrabble-fest at the nearby End Up Bar. 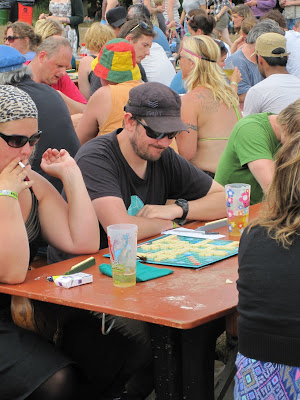 3pm
LONE WOLF (Far Out Stage) is Paul Marshall, not to be confused with French power metal band Lonewolf - though, to be honest, that's not likely. His debut The Devil And I, released with the Bella Union seal of approval, has drawn enthusiastic reviews, and there are certainly fleeting similarities with black-hearted barroom bards like Tom Waits and Bon Iver. But, even if the Rufus Hound 'tache can be overlooked, he can't be forgiven for forgetting the words to a Scott Walker cover and then trying to make amends by publicising a treasure hunt. "Like watching paint dry while getting stamped in the bollocks", says Gareth, grumpy even by his own standards.

3.30pm
The time has come to check the final score in the afternoon's football. Three years ago Newcastle were also playing their first home game of the season against Aston Villa, but thankfully this time history hasn't repeated itself. Having switched my phone off to conserve battery, I turn it back on to be greeted by a repeated buzz of text messages. 6-0. Andy Carroll hat-trick. Quite remarkable. What a way to broadcast our return to the Premier League. This calls for a drink. Well, another one...

4.45pm
Drink now in hand, how else to celebrate such a momentous victory? Perversely enough, in the company of some Mackems. But, as always, let's not hold it against FIELD MUSIC (Main Stage) that they hail from the godforsaken hellhole of wretched humanity that is Sunderland. No doubt those smiles are testament to the fact that they managed to escape. And let us rejoice and be thankful that they did, as they triumphantly outshine the weekend's other more feted British eccentrics Wild Beasts and These New Puritans with a set of beautifully constructed leftfield power pop. 'Share The Words' and 'Tell Me Keep Me' are perfect, but it's a lyric from 'Give It, Lose It, Take It' that really captures their essence: "All that you have is all that you need to be". Self-sufficient, understated, contented, quietly brilliant on their own terms.

5.15pm
Incredibly, it's taken this long for the first sighting of a member of Los Campesinos! (it's guitarist Neil, fact fans). Meanwhile, a fox appears to be making his way hurriedly through the crowd, pursued by a pack of huntsmen and women. Or is that just my experimental cider and red wine cocktail taking effect?

6.30pm
As if to prove that, if not actually Glasgow born, they're nevertheless Glasgow bred, SPARROW AND THE WORKSHOP (Green Man Pub) are collectively suffering from a Buckfast headache. Hangover or no hangover, Irish-born American Jill O'Sullivan possesses one of those voices that stops even your thoughts in their tracks, fluctuating between sensuously breathy and sharply shrill. The overall feel is of a feisty folk Delgados, or Howling Bells with the noir replaced by Nashville. Most stunning of all is 'I Will Break You', a study in cold, steely determination dedicated (jokingly, you hope) to their recently engaged friends. Jen might declare them "not my piece of cake" (though she is also insisting on calling them "Spider In The Bathtub"), but I'm very much looking forward to our next rendezvous in Oxford in October. 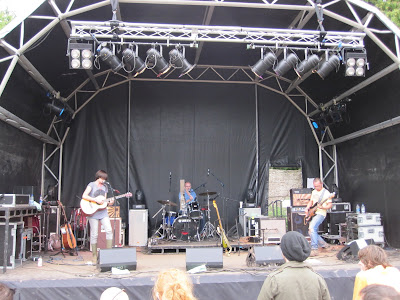 7pm
Jen's on a roll here, trumping Gareth's dismissal of Lone Wolf with "it's like watching paint dry and realising it's the wrong shade".

7.45pm
And there's more: she's now decided to rechristen Chai Wallah "Charlie Wallah". Sadly we arrive just too late to witness the human beatbox band, having stopped to admire the Green Man himself. 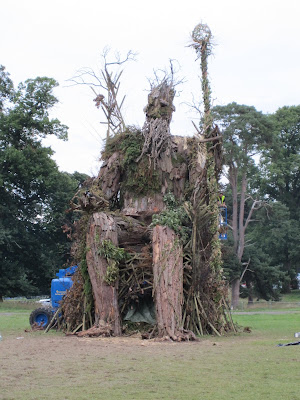 8.45pm
Saying you're off to watch GIRLS (Far Out Stage) could be dangerously misconstrued. What's more, Girls shouldn't be confused with Women - while the latter are Canadian post-punk experimentalists, Girls are a drugged-up American take on British indiepop led by Christopher Owens, who once played with Ariel Pink in a band called Holy Shit (themselves not to be confused with Holy Fuck) and who had an interesting upbringing as a member of the Children Of God cult. I seem to be in the minority, but no amount of flowers festooned around mic stands can detract from an uninspired Wavves yawning their way through an extended pastiche of C86. They couldn't even be bothered to call their debut LP anything other than Album. It's criminal that a band who have the nerve to help themselves to Iggy Pop's song title 'Lust For Life' should sound so lacklustre.

9.30pm
Much more satisfying are Nottingham miserabilists TINDERSTICKS (Main Stage), ushering us into their candlelit boudoir like a cigar-smoking, velvet-jacket-clad raconteur whose twilight years haven't dimmed the twinkle in his eye. I catch only the denouement of the set, but as a fervent Nick Cave fan I see enough to suspect I might come to belatedly acknowledge their charms. It should be added, though, that Stuart Staples is the Cave of the forlorn love song and noirish ballad, not the cock-waving lunatic of Dig!!! Lazarus Dig!!! and Grinderman...

10.30pm
From a band who elevate world-weariness to the status of poetry to another for whom the very concept seems completely alien. You've got to hand it to EFTERKLANG (Far Out Stage), who manage to banish all sobering thoughts that the festival is almost over and, armed to the teeth with gorgeous songs, radiant smiles and innocent delight, incite what can only be described as collective euphoria. At one point someone in a Batman outfit clambers onstage, but rather than being immediately thrust back from whence he came, he's welcomed by band and audience alike. It feels like being at a party to celebrate a victorious Fathers 4 Justice campaign. 'The Soft Beating' is dropped unexpectedly in the middle of the set but doesn't suffer for it, while 'Modern Drift' serves as some compensation for my having missed Grizzly Bear at Glastonbury and marks them out as truly great Danes. 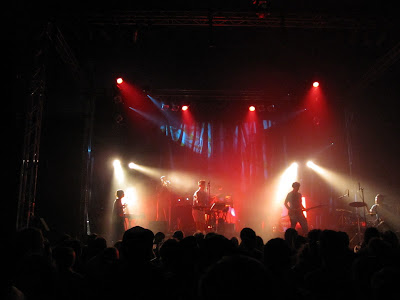 12midnight
Full of joie de vivre and figuring that, with the end nigh, laughter is indeed the best medicine, we venture to the Comedy Tent. The first act we see, MATT KIRSHEN, is a cheeky chappy who looks like butter wouldn't melt but turns out to be deceptively foul-minded. His routine about his mum trying to get to grips with text-speak raises a chuckle, even if it is apparently actually Jimmy Carr's.

12.45am
MILTON JONES, though, is a seasoned class act, a comic tour de force whose ability to craft a killer one-liner lies as much in the timing of the delivery as in the joke itself. The gag about elderly people lamenting friends who've died ("OK, now come down off the roof and give me that gun") might be one for Stewart Lee's Plagiarists' Corner, but there are some absolute corkers of his own in here - often the product of nimble wordplay (getting thrown out of chess club for being a Yahtzee symphathiser...) or flights of splendidly surreal fantasy ("Have you ever fallen asleep eating a plate of aubergines and woken up wondering why the baby seals don't have any faces?"). No shame in admitting the tears are streaming down my face like the renewed rain on the tent. 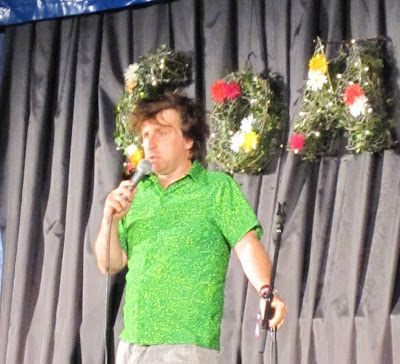 1.30am
The evening's final act, blokeish Australian STEVE HUGHES, isn't without his moments, and he has a Hicksian mistrust of government and sense of righteous fury - but when he starts laying into political correctness and health and safety, straying across the spectrum and into classic Daily Mail territory, I switch off.

2am
After a quick pit-stop at the tents to recover my coat, it's back to Chai Wallah for a blast of drum 'n' bass. Don't suppose there are many clubs in which you can dance to this stuff while enjoying a nice cup of mulled wine.

3.30am
One final trudge back to the tents and, foolishly sampling a selection of punishment drinks left out from a drinking game long since abandoned, we make doubly sure that tomorrow won't be any fun whatsoever. 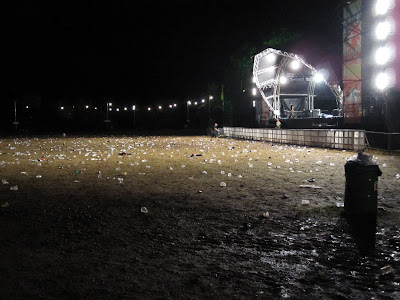