11.30am
Rain! Their own tents having proven about as watertight as a Pete Doherty defence case, Andrea and Ashley move into our enormodome, which means erecting the guest bedroom where the dancefloor had been. In the process we evict a small toad. Has Chris been up to his prince-snogging antics again?

12.15pm
Another Pure Pie - this time pork, cider and mustard. Dark thoughts of the fact that I may be helping to put Pieminister out of business are drowned out by the smacking of lips.

12.45pm
If only all prayers were answered this swiftly. Barely a month since I first clapped eyes and ears on them and resolved to repeat the experience, here - courtesy of Green Man's obliging organisers - are ISLET (Far Out Stage), significantly closer to home now than they were at Truck. The Cardiff Myspace-free mentalists' admiration of Fugazi and Deerhoof may be obliquely evident, but their rampantly surrealist no wave indicates a determination to dance to no one's drum but their own. When they dedicate a song to "people wearing luminous yellow raincoats", it makes perfect sense, underscoring a respect for and affinity with those who are more than happy to stand out in a crowd. If the jury was out last time, it's now well and truly in and collectively wearing an Islet T-shirt. 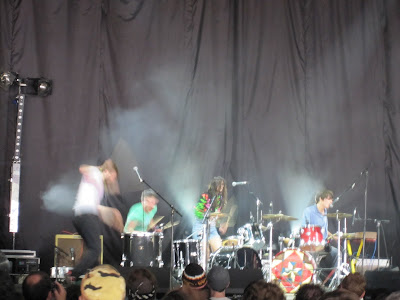 1.30pm
The quartet might not be overjoyed to discover it, but they're eclipsed almost immediately as the most ridiculous spectacle of the day thus far by JOKER'S DAUGHTER (Main Stage). If stupid festival hats are inexcusable attire for brain-addled revellers, then for a performer to don one is downright criminal. Quite what it was in Helena Costas' cutesy affected accent and whimsical ditties about jousting knights and maypoles that duped Danger Mouse into producing her record and Domino into putting it out is utterly beyond me.

2.30pm
Is the Joker himself here to support his offspring? Suspicions are roused by the sight of Batman and Robin aka a lycra-clad father and son moving through the crowd. Not sure how that pushchair's going to assist the crimefighting duo, but best not to question it. 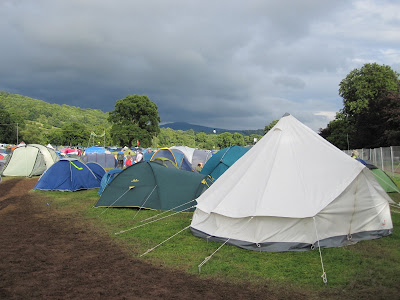 3pm
I've never been to Aberystwyth but have been reliably informed that it's the heroin capital of Wales (or at least used to be) and that 30th birthday piss-ups there wind up with loud exclamations of "You don't touch another man's scarf" and ensuing fisticuffs outside kebab shops. It also happens to be home to RACE HORSES (Main Stage). It's no surprise to learn that Gorky's Zygotic Mynci's Euros Childs was at the helm for their debut EP, such is the winningly quirky and imaginative nature of their songs. The Super Furries are inevitable touchstones, but so are the Coral, psychedelic power-pop and (on 'Man In My Mind') the effervescence of early Supergrass. The closing pair of tracks are a little disappointing, leaving me wishing they'd kept their powder a bit drier, but that aside it's sugar lumps all round.

4pm
From Race Horses to Dark Horses - and from fizzing headrush to transcendent nu-prog dripping with drama. If the gentle bloom of 'For Agent 13' is still missing and 'Devastation' sadly corroborates my first impressions in Bristol in March - that its extraordinary tidal-wave power is largely due to amplification through studio trickery - then the BESNARD LAKES (Main Stage) are in every other respect a complete triumph. Their idiosyncratic application of Constellation Records sensibilities to woozy Beach Boys harmonising and slothful shoegaze is unlikely and yet yields spectacular results. Single 'Albatross' is particularly effective, 'Glass Printer' a welcome addition to the set and 'And You Lied To Me' a grippingly epic and majestic show-closer. But still nothing quite approaches 'Disaster' for pure spinetingling gorgeousness. Did I mention everyone's smiling and the sun's out? 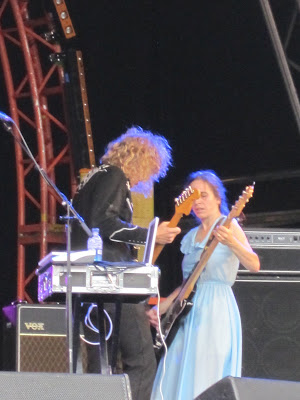 4.30pm
The rain's decision to retire for the day does have one unfortunate consequence: the mud's becoming increasingly difficult to negotiate...

4.45pm
As a keen banjo player, Ricky Tomlinson might well have approved of the folk-noir of his namesake's previous incarnation, Voice Of The Seven Woods. What he would have made of the equally evocatively named successor VOICE OF THE SEVEN THUNDERS (Far Out Stage), though, is less certain. As you might surmise, the knobs labelled "Volume" and "Psych" have both been cranked some way clockwise - but not far enough into the red to wake the two kids sleeping side by side with enormous ear defenders clamped on their heads, or to taste like anything other than weak beer to someone who's recently been transfixed by the unholy freakout that is Comets On Fire's Blue Cathedral.

5.30pm
"It's good to be back", says FANFARLO frontman Simon Balthazar with a smile to the Main Stage audience. Green Man 2007 was one of the band's first festival appearances - we were there and I find myself tempted to come over like a dewy-eyed aunt, ruffling their hair while exclaiming: "My, how you've grown!" Where once they were delicate and callow, now they're bona fide exponents of the Big Music. 'The Walls Are Coming Down' and set-closer 'Luna' are epic but not overstated, their old romantic sensibility not sacrificed in the pursuit of a clumsy anthemicism to which lesser bands might have succumbed. It would be a terrible shame if they remain beloved by TV producers across the Atlantic (Grey's Anatomy, House and The Twilight Saga) but underappreciated at home. 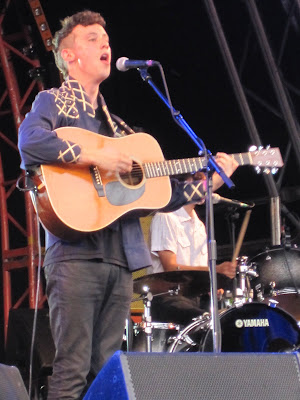 6pm
The eternal dilemma: when spotting band members in the crowd, should you (a) disregard your inebriation and approach them to express appreciation of their performance and/or recorded oeuvre or (b) avoid the embarrassment of slurring out some half-witted attempt at a compliment? When Race Horses canter by with their kit, I plump for (a). "Nice set, guys", Jen echoes sarcastically when they're out of earshot, rolling her eyes.

7.15pm
AVI BUFFALO (Far Out Stage) are the US indie hipsters' latest crush - and it's not hard to see why. They've taken opportunistic advantage of James Mercer's preoccupation with Broken Bells to encroach onto the Shins' turf, 'What's In It For?' planting a flag firmly in their front lawn with its exquisite cooing whimsy. There are also traces of Wolf Parade, Guided By Voices and the band who invited them to the May ATP, Pavement - but that might imply a spikiness that's conspicuously absent. The drummer's incredible, Avi's voice seems as yet unbroken and lines like "I've never written a love song / But I will for you" (in final song 'Remember Last Time') bring me to the realisation that they're wetter than a Belle & Sebastian fan in the deep end of a swimming pool.

8pm
Ah, cricket: summer afternoons, warm beer, member's tie and jacket, the thwack of leather on willow. Hmm. Well, the beer's warm at least, but I'm not sure about the rest - pre-teen kids batting around a ball outside the Far Out Stage encircled by a barmy army consisting of at least 100 mud-encrusted pissheads whooping each attempted sweep, hook and cover drive and indulging in a Mexican wave when a wicket goes down. 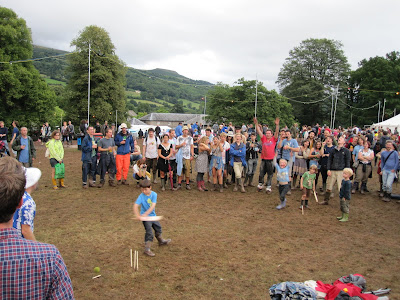 8.15pm
I overhear one of the glass-collecting girls proudly announce to her parents that she's made £27. If I find myself out of money and in desperate need of a pie, I know who to mug.

9pm
The 1-2-3-4 was blighted by technical problems, but no one suffered quite as badly as THESE NEW PURITANS (Far Out Stage), whose set was thwarted by power outages and aborted after the second failed attempt. So it must be a relief to the Southenders that they actually make it through to the end without being derailed. The "violent disco" of their debut LP Beat Pyramid has evolved into something more moody and atmospheric on its much fawned-over successor Hidden. But what could be an Estuary answer to TV On The Radio, British indie paying more than just lip service to the whipcrack beats of cutting-edge hip-hop, is - with the woodwind section and sheet music and the band's aloof air - unforgivably dull and insufferably pretentious.

10.30pm
Bestiality? At a family-friendly festival? Why yes - as at Glastonbury, Cumbrians WILD BEASTS are the object of much amorous attention from a packed Far Out Stage crowd. Not much is different second time around but on this occasion, for whatever reason, Domino's darlings leave me shaken but not stirred - their best song 'All The King's Men' from the Mercury-nominated album Two Dancers aside. 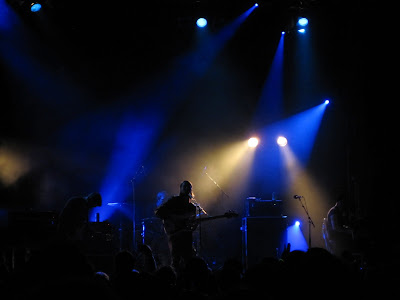 12midnight
More deja vu from Worthy Farm - this time in the form of a technicolour acid flashback courtesy of who else but THE FLAMING LIPS (Main Stage). The balloons and glitter create the feel of a giant kids' party, but the Embryonic material in general and 'See The Leaves' in particular suggests that this bunch of children's entertainers are on some seriously heavy-duty narcotics. Before clambering into his hamster ball, Wayne Coyne conscientiously takes the trouble to warn parents pre-emptively about the use of strobe lighting, but not his fondness for swearing or the animated female genitalia on the screens, and later struggles to string together coherent sentences, issuing vague calls for peace and urging a shy moon to come out to play. 'The Yeah Yeah Yeah Song', which we heard them soundchecking in the morning, is inexplicably dropped in favour of 'Pompeii Am Gotterdammerung' and everyone's inevitably on tenterhooks for 'Yoshimi Battles The Pink Robots', but it's 'Do You Realize??' that steals the show, the Lips' reminder to be thankful for being alive as simultaneously poignant and uplifting as ever. 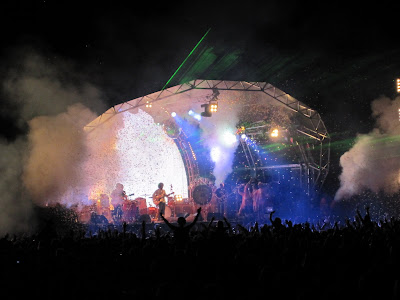 1am
Factory Floor had the misfortune to draw the short straw of clashing with the Lips, and their heirs to the Far Out Stage METRONOMY are little compensation. Joseph Mount might be an in-demand remixer but his band's tinny Micro-Hot-Chip electro-indie is an irritant and their chest lights, which flash in sync with the beat, a diversionary tactic that just doesn't wash.

1.45am
Did someone say hot chips? Back at the Pure Pie stall for fried potatoey goodness with a liberal dousing of gravy. Dare I say it, but better than Pieminister mash?

2.15am
I'm presuming the chap stood next to me at the urinal dressed as a giant squirrel didn't realise that the Flaming Lips went through their animal stage invasion phase about seven years ago.

2.45am
The Far Out Stage DJ is dire, the tent emptying out as people vote with their feet. But the night isn't over yet. Tucked away behind the bar is Chai Wallahs, an enormous Bedouin tent to which most serious party-fiends have gravitated. Time to bust some moves to drum 'n' bass, methinks. No, the night isn't over yet - not by a long chalk...
Posted by Ben at 1:36 AM

Probably just as well my missus doesn't read this site as you'd probably find yourself pelted with wedding cake during your bestie speech in May with remarks like these! ;o)

Not that you should take this lack of looking in as a snub, she doesn't read my stuff either!