8.30am
Drizzle on canvas. After the scorching sunshine and balmy heat of Glastonbury, the 1-2-3-4 and Truck, I suppose I'm overdue a wet one.

9.30am
Perusing the programme, which - being as thick and substantial as a small paperback - is decent value for money, despite costing £6 and being in desperate need of a competent proofreader. Perhaps I should offer my services for next year. So, which of the more unfamiliar names sound worthy of investigation? The Hundred In The Hands, perhaps, as well as Lone Wolf, Plank and Voice Of The Seven Thunders. Call me sad (and I'm sure you will), but I'm actually most excited to learn there's a Scrabble free-for-all at the End Up Bar on Sunday...

10.30am
Chris awakes to discover a sizeable toad sharing his tent. Either the little chap snuck in to keep dry or Chris was more wasted than he imagined last night and kissed a prince.

11am
Queueing for a Portaloo as thunder peals overhead - ah, the quintessential British festival experience.

12noon
Forgive me Pieminister, for I have sinned. Last time we were here, we made so many pilgrimages to your stall that I lost track and, pie-eyed, spent the final day treating our few remaining coins as precious tokens to be redeemed for your baked bounty. So it's with a traitorous heart that I slope over to the Dark Side aka Pure Pie (which is within much easier reach of the Far Out Stage) and sell my soul to the girl of about eight who's serving in exchange for a steak, ale and horseradish pie stuffed full with delicious meat and gravy. Jen, for her part, tucks into a Caribbean wrap - an enormous fajita cone loaded with spinach and chickpea curry and topped with sauces which she declares the best festival food she's ever had.

12.45pm
The Folkey Dokey Stage is no more - it's now the Far Out - and first to tread its boards for 2010 are PLANK. The trio have got the kudos of being on their native Manchester's label-du-jour, Akoustik Anarkhy, and of a smidgen of Radio 6 airplay, but in reproducing the lengthy list of highly esteemed influences from their MySpace site the programme rather oversells them by association. NEU!? Slint? Led Zeppelin? Distant aspirations for motorik songs that don't seem to get much beyond third gear. 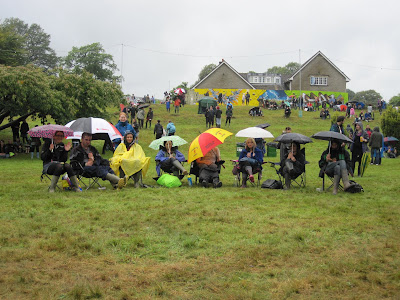 2.15pm
A wander around some of the sodden site takes in Speakers' Corner and an inflatable elephant, while Jen seizes the opportunity presented by a hula hoop to gyrate like Beyonce on a turntable. I soon spy my own source of merriment: the Green Man Pub, complete with the festival's own brew, Green Man Growler. 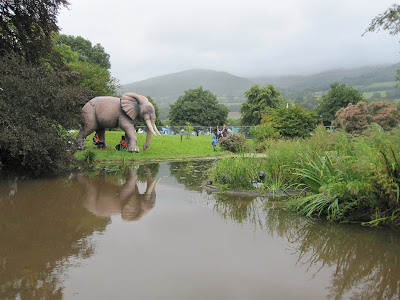 2.45pm
THE WAVE PICTURES (Main Stage) are a band more used to standing in the shadows while others in front of them shine - John Darnielle, Herman Dune, Jeffrey Lewis, Darren Hayman - so it's a quiet revelation that they're so calmly at ease when in the spotlight themselves. Charming rather than in-your-face, the trio beloved of arbiter of taste Everett True eschew frills or flamboyance - unlike Spencer McGarry Season, they're masters of understatement and all the more effective for it. David Tattersall's voice is mesmeric both in its own oddness and in the peculiar tales it tells, and songs like 'Blind Drunk' help them make a much better impression than they did at the Twisted By Design gig back in 2006.

3.30pm
Curse the Far Out Stage for running 15 minutes ahead of schedule. Though admittedly the snippet I do manage to catch of O CHILDREN suggests they're the trainer bra of goth bands, three walking Shoreditch haircuts backing an eight-foot-tall cross between Nick Cave, Barry White and Blackburn defender Chris Samba. 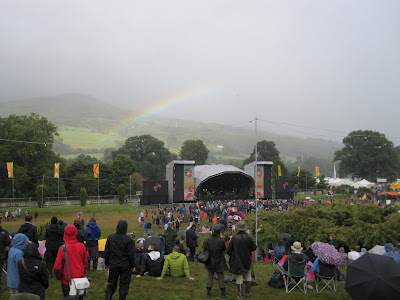 4.15pm
THE HUNDRED IN THE HANDS (Far Out Stage) wear their NYC origins as proudly as their impossibly tight jeans - and forgive my cynicism for suspecting that being fronted by a dazzlingly attractive waif by the name of Eleanore Everdell won't have done their cause much harm either. But, as an act signed to Warp, the pair are producing a genuinely radical style of music by that label's standards: disco-pop. Jason Friedman's reverb-saturated guitar sound might be vogueish among the nu-shoegaze set, but the beats add levity and breeziness, and (with the help of Richard X's production nous) the likes of 'Pigeons' engineer an unexpected but not unwelcome encounter between Beach House and Giorgio Moroder.

5pm
To keep the site clean, the bars are offering an incentive of 5p for every pint pot returned - so you've got to admire the entrepreneurial initiative of the girl buzzing around our feet scouring the turf for empties. If she keeps on collecting at this rate, she'll be able to make back the cost of her family's tickets.

5.45pm
You've got to admire the optimism (or is it the egotism?) of wearing shades while it's drizzling, but I suppose there is just a hint of sunshine. ERLAND & THE CARNIVAL (Main Stage) - seem intent on rousing us to a muddy knees-up. Just as when last spotted - opening for the Besnard Lakes in Bristol - the rag-tag bunch's quintessentially English psych-folk-pop is intermittently diverting, particularly when harking back to the Coral's self-titled debut (on 'You Don't Have To Be Lonely'). Certainly comedian Robin Ince, sporting a Hefner T-shirt, is temporarily transfixed, chuffing furiously on a fag like his life depends on it. Perhaps someone should tell him that smoking's actually bad for your health. 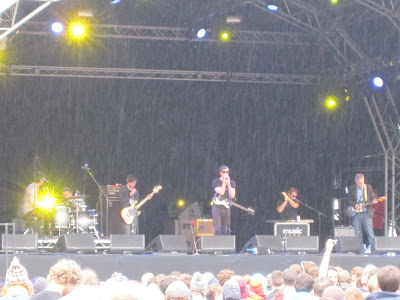 6.30pm
This festival's fuel of choice: Peanut Puffs. Gawd bless Waitrose for stocking something akin to the "peanut flips" we discovered in Croatia.

7.30pm
If you were picking bands tailor-made to play something called the Far Out Stage, then SLEEPY SUN would surely be near the top of the list. The San Franciscans sound like a dozy Sabbath dabbling in acid-folk in a room thick with pot and patchouli fug and think nothing of christening a ten-minute epic 'Sandstorm Woman'. But, it transpires, even hippies can't be chilled out all the time - witness moustachioed frontman Bret Constantino getting increasingly irritated and stroppy about the awful mix and, in particular, the fact that his mic is continually cutting out, leading them to abandon at least one song ('Ooh Boy'). Rachel Fannan, his foil [though sadly no longer], attempts to lighten the mood with a cheesy joke - "One atom says to another: 'I've lost an electron'. 'Are you sure?' 'Yes, I'm positive'" - but there's nothing light about the sumptuous rolling riffs of 'Marina' or 'Open Eyes', and I'm still completely besotted with THAT opening drumbeat for 'New Age'. Personally, the technical hitches mean they're a disappointment - but it's telling that most of those in our party who haven't seen them before still declare themselves smitten. 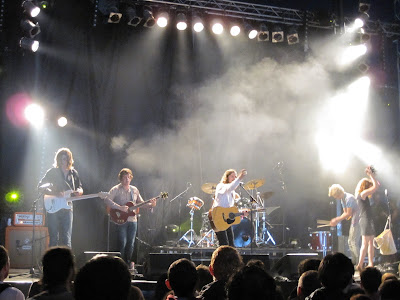 8.15pm
Another disappointment, when I need a pick-me-up: a jerk chicken wrap from the same place that Jen was praising so highly earlier in the day. Can't fault the size or the feistiness of the pepper sauce, mind.

9pm
No idea quite why I'm still at the Far Out Stage bothering to watch a late-phase Britpop clinger-on who in the 90s had such disrespect for his band's fans as to foist on them a debut album he himself labelled "a load of shit". With Boys Outside, former Beta Bander STEVE MASON has slunk back to baggy indie bollocks like a dog to vomit, no longer hiding behind his multiple personas (King Biscuit Time, Black Affair). In the absence of anything remotely resembling entertainment, we amuse ourselves playing a game of "Steve Mason looks like someone who...". The best suggestions? ".. listens to speed garage and buys plant food online". "... picks up a News of the World and pack of bacon flavoured Frazzles on a Sunday morning and then spends the rest of the day fine-tuning his XR3".

10.30pm
There's a pay-off for sticking around, though - and what a pay-off. For after Steve Mason - the equivalent of a hair shirt, abstinence and strenuous and regular self-flagellation - comes the heavenly sound of FUCK BUTTONS (Far Out Stage). As good as debut Street Horrrsing was, it's become increasingly clear that last year's Weatherall-produced Tarot Sport catapulted the Bristolian duo out of their narrow niche and onto another level altogether. Who would have thought that music this freeform, this abstract, this brutally loud, could possibly ever hold such hypnotic sway over dancefloors? Every song, but especially 'Olympians', meets with a rapturous response. Button-pushers Andrew Hung and Benjamin Power (the latter sporting a bad 'tache to rival Bret Constantino's) must surely be as delighted as anyone - and, tonight, that's pretty darned delighted indeed. 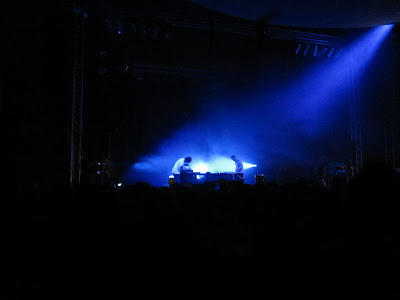 12midnight
After which the normally solid and dependable DOVES (Main Stage) - Jimi jowly and beardy, Jez wearing a daft hat, Andy ticking away metronomically on drums - can't fail to be the very definition of dullness. So it's back up the hill to the Far Out Stage in search of after-hours fun and a DJ to save my life...

1am
"Ready, are you? What know you of ready?" What indeed. There's nothing that could have quite prepared me for Duncan Beiny aka DJ YODA in full flow. Q apparently named him as one of the "Ten DJs To See Before You Die" - nine of them I could no doubt have lived without, but where Yoda's unique is that there actually is something to see. His cut 'n' paste technique is applied as much to the accompanying visuals as to records he scratches, so the overall experience is of getting everything from TV classics and old-school hip-hop to cartoons, pop and cat food adverts all wittily blended up, digested and regurgitated in a spectacular multisensory and technicolour yawn over our heads. But y'know, in a very good way. 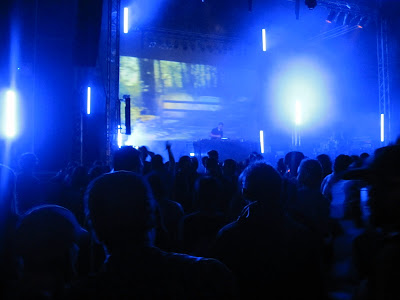 2.30am
Fair play to HEXSTATIC (Far Out Stage), but it's a case of diminishing returns and a thankless task following Yoda. The duo do at least pull 'Sabotage' out of the bag and, at the end of the set, Soulwax's superb mash-up 'Smaxxlaws' which takes me fondly back to clubbing at the Academy in Birmingham in the early noughties. Of course back then it were all fields.

3.30am
Returns diminish further with DJ CHEEBA (Far Out Stage) - another copyist it seems, who appears more interested in showing off his turntable skills (or should that be "skillz"?) than actually providing entertainment. 'Song 2' brings the night to an end, though the bars are still serving, the staff all heroically wasted.

5am
I hit the hay, satisfied I couldn't have squeezed much more out of the day.
Posted by Ben at 11:40 PM