10am
The usual routine: over to the cafe for coffee. Casualties of combat are splayed out on the sofas and beanbags, destroyed by day upon night of excess. It's like some kind of tented military hospital for the festival-fucked. A sunbrowned woman barges her way up to the counter: "Thank you for playing some good music. For the last three days it's been ABSOLUTE SHIT". Point made, she's on her way. 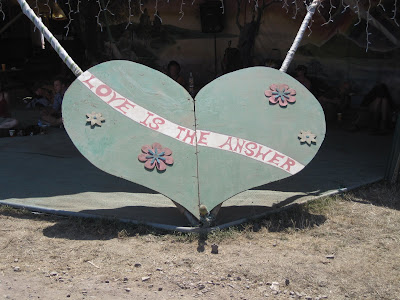 11.30am
Ah, coffee - the great humaniser. Slathered in suncream, we sit and listen to Owen's fantasies of having a fridge in the lounge solely for ham and beer, and discuss how "Bernard Manning's chicken drumsticks" might be marketed. Once again that exploration of the Green Fields isn't going to happen, is it?

12noon
A plateful of paella by recommendation. Sadly, though, my craving for chorizo goes unfulfilled - it's in short supply, as are the prawns and calimari. Plenty of chicken and mussels though.

12.30pm
Rabbits in the headlights? Not FRIGHTENED RABBIT, who appear to be enjoying having the midday freedom of the Other Stage even if frontman Scott Hutchison laments the fact that "You can't have a one-on-one conversation at a festival". Like Stornoway, they've also suffered van troubles en route (though have travelled from rather further afield than Oxford - Switzerland...), but I'm glad they made it, being bearded Scottish types whose speciality is FatCat-endorsed gloomy indie with an Americana and folk influence in a similar vein to The Twilight Sad and recent Idlewild. 'Swim Until You Can't See Land' is the day's first anthem, fellow The Winter Of Mixed Drinks single 'Living In Colour' the second, and the sentiment of the chorus to set-closer 'Keep Yourself Warm' - "It takes more than fucking someone you don't know to keep warm" - conjures up the spirit of Arab Strap at their most archly misanthropic.

1.45pm
After which unfussy, unsophisticated, good-time, bar-room rock 'n' roll is probably the order of the day - and THE HOLD STEADY (Other Stage) are only too happy to oblige. "Like most of our songs, this song's about a boy and a girl", says Craig Finn (or is it George Costanza?) of 'Chips Ahoy! with a big grin. "This one's also about a horse". As joyful as it is, the set stretches on a bit too long and if their Cheap-Trick-meets-Husker-Du confection isn't quite punk rock reaching for the pipe and slippers, its evident appeal for Mojo Man nevertheless renders me insensible to its charms.

2.30pm
Girls are wandering about wearing bikini tops and wellies, clearly determined to get use out of the latter even though it hasn't had the decency to rain.

2.45pm
It's that time again. The Pyramid Stage otherwise engaged and the main field already full, we're herded into the East Football Arena outside the pedestrian gate. Shuffling gradually forwards we eventually arrive at a suitable vantage point for the big screen.

3.15pm
Perhaps it's down to the arrangements and circumstances, but the atmosphere is strangely muted from the start - markedly different from the Slovenia game on Wednesday. Has defeat by the old enemy already been accepted?

3.45pm
Half-time, and the field is lively and animated with talk about Frank Lampard's disallowed goal. We need a sense of gross injustice to fire us up, it seems - even if we benefited from exactly the same thing in 1966. The Germans are 2-1 up, but it's far from over.

5pm
Dear England, I have just sacrificed the following: Holy Fuck's main set, The Drums and Slash playing songs from Appetite For Destruction but most significantly Grizzly Bear who were one of my must-sees. And for what? An embarrassing and supremely hapless performance culminating in our unceremonious ejection from the World Cup. A vow is made: never again will football come between me and music at a festival.

5.30pm
Maybe wincing and swearing our way through the football post-mortem was worthwhile after all. It means we arrive at the Pyramid Stage with perfect timing, our walk around the back of the field coinciding exactly with RAY DAVIES wrapping up his Singalong Sunday set with 'Lola', 'Waterloo Sunset', 'Days' and 'All Day And All Of The Night' - classics one and all. Any later and we'd have missed them; any sooner and we'd no doubt have been subjected to some of the many awful tracks to which The Kinks also put their name.

6pm
Hang on a minute - where am I? This doesn't look or feel like ATP. And yet here before me are a reformed punk band whose influence far outstrips their record sales. After the debacle of the England game, what we need is entertainment - and what we get is Entertainment!, courtesy of GANG OF FOUR (John Peel Stage). No microwave-trashing this time around (or at least not while I'm present) - just bolshy, sinewy, bass-heavy punk-funk. Like Shellac getting their groove on - a deliciously terrifying thought.

6.45pm
On Domino, like Clinic. An esoteric thrill, like Clinic. Purveyors of warped, slightly sinister psych-garage that never lapses into retro cliche and makes you itch and scratch all over, like Clinic. Dressed up for the occasion, like Clinic (albeit in an array of tribal robes rather than scrubs). Little wonder that this particular Clinic fan finds much to enjoy about ARCHIE BRONSON OUTFIT (Park Stage). Lascivious former single 'Cherry Lips' is the pick of the bunch, and both Derdang Derdang and this year's Coconut are duly added to my already-lengthy list of necessary post-festival purchases. 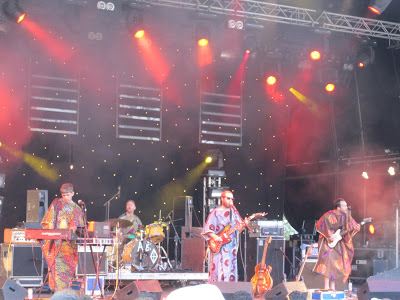 7.45pm
This time last night I was watching a bunch of Canadians perform at slightly less than their usual exhilarating peak. For Holy Fuck then, read BROKEN SOCIAL SCENE now (John Peel Stage). Triumphant at ATP in May, tonight they start out low-key and somewhat disinterested, 'World Sick' seemingly a description of the mood in the camp rather than an anthemic statement of intent. But a parade of favourites passes by - 'Fire Eye'd Boy', 'Superconnected', '7/4 Shoreline', a Spiral Stairs-lite version of 'Texico Bitches', Lisa Loeb's shimmering pop diamond-in-the-rough 'All To All' - and by the time the climax of 'Ibi Dreams Of Pavement' and 'Meet Me In The Basement' they've reached something approaching their best. 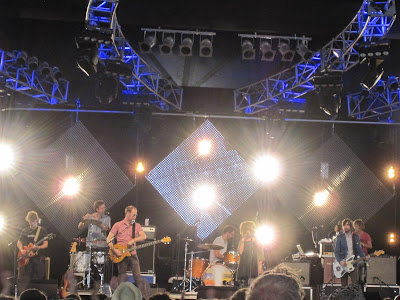 9pm
"We're not being LA assholes", claims James Murphy of LCD SOUNDSYSTEM (Other Stage). Hmm. His shades (without a hint of Matt Berninger's apology), white suit and typically nasal declaration that the place "smells of human faeces" beg to differ. It's a measure of my response to This Ain't Happening that its songs sound better live but that even then 'Drunk Girls' and 'Pow Pow Pow' are largely naff and 'I Can Change' still comes across like a poor facsimile of 'All My Friends', which precedes it. What's more, the hits (they can write 'em) - 'Someone Great', 'North American Scum', 'Losing My Edge' - are MIA. And yet all is forgiven - for the aforementioned 'All My Friends' and the closing trio of tracks from their self-titled debut: 'Tribulations', 'Movement' and an incredible 'Yeah (Crass Version)'. The beat is relentless, the groove tight, the conditions perfect and I'm utterly lost. The one band of the weekend of whom no one could legitimately demand: "More cowbell"... 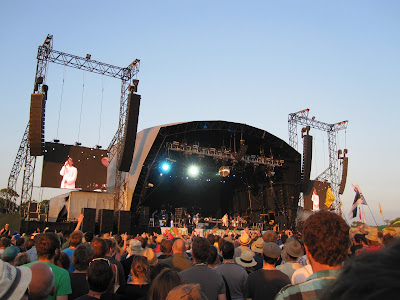 9.30pm
Walking past a noodle bar, I'm almost bowled over by a chap who leaps up and across my path to ask a man wielding a Mexican flag the score in his country's World Cup quarter-final against Argentina. When he turns around to make his way back to his cardboard tub of dinner, it turns out to be one William Bragg. Should have guessed - we are opposite the Leftfield Tent, after all...

10pm
It's not long before I know how Mexico fared too. "Today us Mexicans and English have two things in common - number one we won't talk about but number two we're here to have fun", says Rodrigo of RODRIGO Y GABRIELA. This year's West Holts Stage having (almost) kicked off with Mariachi El Bronx, it's fitting that they should close it. The duo's story - moving far from home and finding fame and fortune on the streets and in the pubs of Dublin - is nearly as extraordinary as their music, which has the speed and ferocity of Slayer with the plug pulled. Their interplay suggests a telepathic understanding and the use of their guitars as percussive instruments is remarkable. On this showing, though, the names are the wrong way around - it's Gabriela who's the real star.

11pm
If the rumours are to be believed, STEVIE WONDER (Pyramid Stage) has been flown in by helicopter for his headline performance, following an afternoon running the line in the England v Germany match... 'Higher Ground' and 'Superstition' are worth the entrance money alone, but elsewhere fromage is in such abundance that you could cut the atmosphere with a cheesewire. 'I Just Called To Say I Love You' and dedication after dedication to people who changed things (a counterpoint to the rant that "the haters should drink Haterade and die") are a clear case in point. Things threaten to take a turn for the traumatic when he starts talking about getting "Little Stevie" out (is that how he got his stage name?), but thankfully he's only channelling his inner child. The rendition of 'Happy Birthday' - a duet with Michael Eavis which underlines why Mr Glastonbury doesn't sing more often - just about manages to hit the right sentimental note, though.

1am
A disappointingly belated discovery: the Ridge & Furrow pub by the Avalon Stage, where - if you don't mind being witness to the death throes of Gomez's set - you can enjoy a broad range of real ales.

1.30am
You know how it is: a few pints and suddenly you're hallucinating Loyd Grossman playing in a punk band. Except, er, it's no hallucination...

4am
Forced to abandon Base Camp when it shuts up for another year, we embark upon the long-overdue exploration of Arcadia and Shangri-La - a strange fantasy world of dark tunnels, bright lights, miniature aircraft, pokey bars, crashed trams and odd contraptions. Sensory overload, basically. 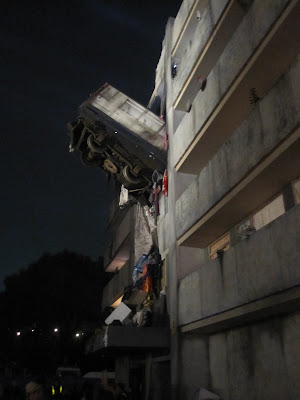 9am
Amazing weather again. It seems wrong to have to leave.

11.30am
This place is eerie without any music. At times the only sound is of flags and collapsed gazebos flapping in the breeze.

1.30pm
Someone, please indulge our fantasies of being teleported home...

3pm
All packed up, it's time to go. We've left no (or at least very little) trace - shame that can't be said for many other groups.

4pm
The paths and fields are strewn with abandoned pushchairs. How many people are heading home a small child lighter? 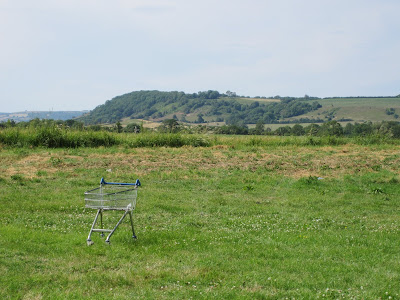 Hmmm they def played daft punk playing at my house... I am still disappointed no someone great though .....
too much cider and sun woolhead !

Don't know why I'm trusting your memory rather than my own (hardly Mr Sobriety yourself), but I've updated it...

I know you mean "All My Friends," but part of my brain insists that LCD spent part of their Glastonbury set this year playing an old Six By Seven song. The thought makes me very happy, I admit.