11.30am
Man am I glad I talked myself into going to bed early last night. If I hadn't, this already excruciating headache would be ten times worse...

12.30pm
A slap-up lunch of spaghetti, pesto and bacon courtesy of my chalet-mate. Sod your manky Burger King meals - we're the ones dining like royalty.

1pm
The fact that I'm struggling to keep it down isn't solely due to self-induced illness - oh no, it's also due to what's on ATP TV: The Room, memorably (and very accurately, as it turns out) described as "the Citizen Kane of bad movies", and replete with stomach-churningly prolonged sex scenes. Written, directed and produced by one Tommy Wiseau, it also stars him as the wronged party in a love triangle with his fiancee and best friend. The acting is jaw-droppingly awful, the dialogue clunky beyond compare and the reason for the $7m production cost a mystery. The characters can waste 30 seconds ordering coffees and yet the fiancee's mother's out-of-the-blue admission that she has breast cancer is swept over and never revisited. But what it does do is provide plenty of pick-me-up laughs, as well as the catchphrase of the weekend: "YOU ARE TEARING ME APART, LISA!"

1.30pm
Turns out the sun does actually occasionally deign to shine on Minehead. Lounging about on the grass outside the Irish Bar is a novel experience, making a pleasant change from hopscotching around puddles in the drizzle.

2.15pm
So it's a perfect time to slink away into the dark of the Centre Stage for a band who sound like they only crawl out from under rocks when dusk falls on the Australian outback. THE DRONES' set is much as it was in December, albeit a bit longer - once again they're in for the kill from the off, Gareth Liddiard preaching their hellfire blues with broodingly violent opener 'Jezebel'. Gala Mill contributes most of the electrifying moments ('I'm Here Now' and 'I Don't Ever Want Change'), but now the best tracks on last year's overlooked (by me) Havilah - 'The Minotaur' and 'Nail It Down' - are starting to compete for attention and older songs like 'The Freedom In The Loot' pack a fiercesome clout. "There ain't no sunshine way, way down", growls a sweat-soaked Liddiard on the greatest Australian song ever, and "way, way down" is where they abandon us. Stepping back out into the daylight, we can catch our breaths. 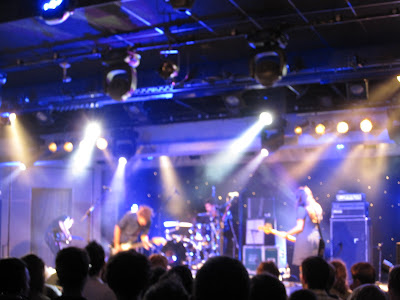 2.45pm
Watching The Drones has meant missing this. You win some... 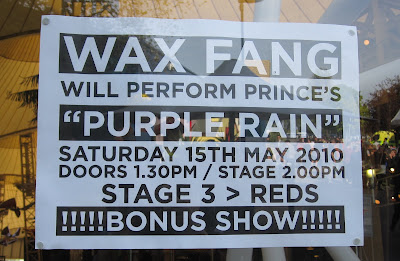 3.15pm
SST labelmates and tourmates of Black Flag and the Minutemen back in the early 80s SACCHARINE TRUST (Centre Stage) may have been, but I'm struggling to see the common ground. Squat guitarist Joe Baiza's oddball style combines with Jack Brewer's impersonation of Les Savy Fav singer Tim Harrington's uncle on day release - a man in a long leather trenchcoat stood at a bus stop barking barely comprehensible rantings at passers-by - to create a kind of surrealist post-punk that never once conforms to expectations.

3.45pm
Outside the sports bar, men are crowding around a TV like moths around a lightbulb, lured by the FA Cup final. Chelsea hit the woodwork twice in the short time I'm watching - doesn't bode too well for Pompey's chances...

4.30pm
Time for some musical Marmite. To say that FIERY FURNACES (Pavilion) divide opinion in our camp would be a bit disingenuous - the reality is that everyone hates them except me. Like The Drones before them, they're also in rock mode - and, as when I saw them touring I'm Going Away back in September, I'm still not convinced that this really suits the subtleties and eccentricities of all their material (they play something from every album), even if the likes of 'Charmaine Champagne' and 'Keep Me In The Dark' come across well and the overall impression is of 70s rock having a pleasingly funny turn. Eleanor Friedberger, wearing a tie-dyed T-shirt she's made especially for the occasion and spinning her bizarre wordy yarns about "Navajo basketball coaches", looks ever more like Patti Smith, while brother Matthew - who I've just about forgiven for his stupid diss of Radiohead - spends the set smiling secretly to himself. "This is just like being back at high school", says Eleanor, excited at the prospect of seeing Pavement later. Aren't we all? 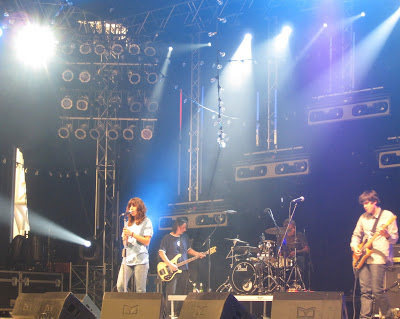 6pm
The sleeptalking member of the group discovers he was spelling out the word "D-R-U-N-K" last night. Skills. Meanwhile, another member of our party recounts how he was wheeling his very young daughter along in her pram earlier in the day when Steve West bounded over for a coochy-coo.

7.30pm
Maybe it's a consequence of having been exposed to Sunn O))) twice in December, but compadres-in-drone-metal BORIS (Centre Stage) seem rather tame in comparison - especially for a band whose record label is called Fangs Anal Satan. For supposedly extreme music, it doesn't really feel it. The throb and din doesn't nail you to the wall, and all you're left with is trying to make out the famed double-necked bass/guitar, silhouetted amidst the gloom and dry ice. It's no good - I'm going to have to award them the dubious distinction of being the first Japanese band I've heard and haven't taken to instantly. 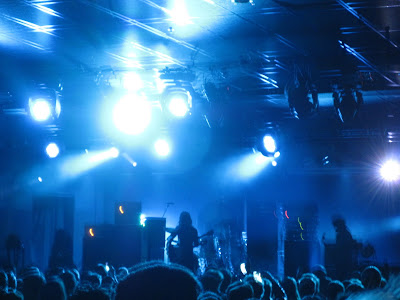 9.30pm
And so to our hosts for the weekend, and the question that's been playing on my mind - and, I suspect, the minds of many others: will final album Terror Twilight (of which I'm a big fan, personally) prove to be an unsettling elephant in the room? But no. The differences that drove PAVEMENT (Pavilion) apart ten years ago appear to have been forgotten, the hatchets buried, as 'Spit On A Stranger' and 'The Hexx' turn up unexpectedly amidst the classics. There's no 'Carrot Rope', admittedly - but then that's not too surprising given that it's missing from Quarantine The Past. The past does indeed seem to have been quarantined (held in "voluntary or compulsory isolation"), now let out to joyous effect: 'Summer Babe', 'Here', 'Rattled By The Rush', 'Cut Your Hair', 'Zurich Is Stained'... We get 'Two States' underlining exactly why The Fall are on the menu for tomorrow; we get a clutch of tracks from my absolute favourite record Brighten The Corners ('Shady Lane', 'Date w/ IKEA', 'Starlings In The Slipstream' and 'Stereo', whose exchange about Geddy Lee still raises a smile); we get Spiral Stairs belatedly realising that 'Gold Soundz' is the reason some fans are wearing Santa outfits; we get a beaming Bob (who Malkmus claims has met everyone on site) twirling with his wife during the sublime 'We Dance'. If tonight is one thing, it's a vivid reminder of what a stupendously good band Pavement were - and, once all the reformation hoopla has died down, may yet continue to be. 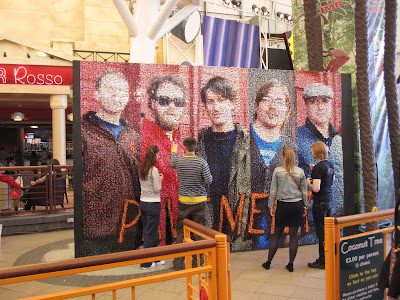 10.30pm
Back to the chalet to recover and agree that, if Pavement's set was another thing, it was an urgent prompt to revisit Slanted & Enchanted and Crooked Rain, Crooked Rain. And also to pimp cheap frozen pizza. 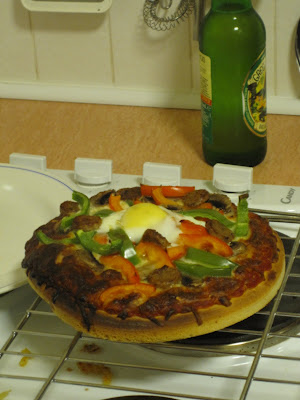 12midnight
Now here's a recipe for disaster: a delirious love-in with one of the most revered indie rock bands in music history, followed up at this time of night by the prospect of a man wearing a chullo (since when did Dappy from N-Dubz become a style icon?) and sitting on a stool, performing songs from an album I think is overrated (Logos). And yet it turns out to be one of the festival's highlights. This time last year Bradford Cox and his bandmates in Deerhunter were chalet neighbours of ours - but now he's back on his own as ATLAS SOUND (Centre Stage). Cox's Neil Young influence shine through brightly, his use of looping pedals is expert, his goofy stage patter - an anecdote about trying in vain to impress a boy with his guitar-playing at parking lot jam sessions as a kid, enthusiastic and heartfelt praise for the NHS after he fell ill at the Matt Groenig curated ATP the previous weekend and had to go to hospital - warm the cockles. Most touching, though, isn't anything of his own creation (including seductive single 'Shelia') but a sensitive cover of 'We Dance', a song we heard performed by its original composers just a few hours earlier but which he manages to make very much his own. 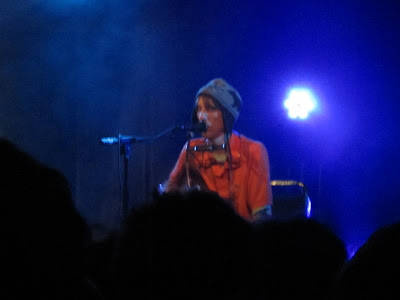 1.30am
The early hours of the morning finds us arguing about Gorillaz. My considered stance: they're shit, largely on account of being afflicted with Damon Albarn's involvement. I'm surprised to come up against some disagreement, but sadly I'm in no fit state either to be conciliatory or to justify my position with firm evidence, so just repeat my position ad infinitum instead.

3.30am
It seems as though Los Campesinos!' autumn tour has reached Minehead. For here in the Crazy Horse, grooving to lots of motown and leaping around to 'Sabotage', are LC!'s Neil, fellow bassist Richard Scott of Copy Haho and Mr Sparky Deathcap. And before we know it, we're drawn into their Dancing Circle, according to the rules of which, if you're presented with a ceremonial baseball cap, you have to perform a dance within the circle before passing it on. When my turn comes, I somehow manage to pull off something that passes for deliberate rhythmic motion.

8am
Still awake, still drinking wine. You say idiocy, I say a steely determination to make up for Friday's poor show. Let's see who's right in the morning. Well, OK, afternoon then...
Posted by Ben at 12:41 AM