2.30pm
There can't be many things more disorienting than waking up with the sun already on its way down and realising that you're still obviously really rather drunk.

3.45pm
To Pizza Hut - not so much for the food as for one of their Very Berry smoothies that, enjoyed to a soundtrack of Sleepy Sun and Godspeed! You Black Emperor, has magical healing properties. I start to feel - well, not normal, but at least on the same planet as normal.

4.15pm
Is that really Steve West queuing up for a pint? C'mon Steve, it's your party - you can queue-jump if you want to.

5pm
It's a neat turn of fate that, just as legendary New Zealand label Flying Nun rises from the ashes, the leading lights of its last generation of bands have also reformed. THE 3DS (Centre Stage) are long-term friends of the weekend's main men (who may or may not have helped coax them back together), and enjoyed modest acclaim and underground success in the UK and US in the early to mid 90s. Unkempt, unstyled, slacker noise pop that falls somewhere between Sonic Youth and Guided By Voices? Why yes, don't mind if I do. Oh the joys of knowing I work with a Kiwi who has most of Flying Nun's back catalogue to hand.

6pm
Talking of things coming back from extinction, here - right on cue - are THE DODOS (Pavilion). Rather unusually, the San Fransciscan duo eschew bass, whether stringed or drum, and create a curiously rhythmic and percussively rich kind of music that nevertheless fails to hold the attention of someone suffering from hangover-induced ADHD.

6.30pm
Like Sunn O))) in December, BORIS have been handed two separate Centre Stage slots, and have decided to use one to perform an album in its entirety. Despite yesterday's disappointment, I'm here again, having been sold on reports that the solitary track that comprises Feedbacker shifts from drone to brutal heaviness to insanity and beyond. But, a massive gong aside, nothing much is any different, either in terms of performance or my nonplussed reaction to it.

7pm
Abel Ferrara's Bad Lieutenant proves a temporary distraction on a trip back to the chalet to refuel.

7.30pm
Rock royalty everywhere! There's Stuart Braithwaite striding purposefully past with Eleanor Friedberger in tow, while Mark Ibold potters around looking dazed as though from the sudden realisation that he's in two of the best bands in the world simultaneously.

8pm
More so than the previous days, today appears to be all about Pavement paying tribute to their personal heroes - hence the presence on the bill of THE CLEAN (Pavilion), to whom a few other scruffy American indie types owe a debt of gratitude. Like the 3Ds, they're Kiwis who helped raise Flying Nun's profile, and another thoroughly pleasant slacker pop band - albeit slightly, well, cleaner in sound than their compatriots. They declare themselves to have been blown away by Faust the previous evening - not the first time I'll hear about the Germans tonight...

8.15pm
My ability to shoot hoops may have deserted me quite spectacularly, but at least I can claim victory in the air hockey event in the ATP Olympics.

8.45pm
Is that really Stewart Lee wearing a brown hoodie? What on earth's he doing here?!

9.30pm
Ah yes, of course, that would explain it: THE FALL (Pavilion), here in their capacity as the band of whom Pavement confessed Slanted And Enchanted was a blatant rip-off (try 'Two States' for starters). An aficionado of the Fall (not Lee, in case you're wondering) told me that the line-up last time I saw them, in March 2007, was one of the tightest and best he'd witnessed. So naturally Mark E Smith handed them all their P45s shortly afterwards. The latest incarnation isn't perhaps quite as sharp, but like their predecessors (and forgive me for quoting myself) they also eye their paymaster "with the sort of nervous suspicion china shop owners reserve for passing bulls". Clad in his typical uniform of white shirt and leather jacket, Smith behaves like a gruff, inquisitive toddler, twiddling with mics, muscling in on the keyboard and, on his way off stage, turning the guitarist's amp off - while all the time the band plug away manfully with the Kraut-garage backdrop to his ramblings. As John Peel famously said: "They are always the same; they are always different". Your Future Our Clutter is their 28th studio album (and first for Domino), and I for one will not be placing any bets on it being their last. 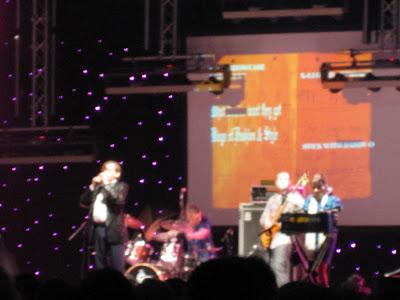 10.15pm
As the drummer on Codeine's 1994 slowcore classic The White Birch, Doug Scharin is probably relishing the opportunity to play at a rate faster than 5bpm. The sticksman for ENABLERS (Reds Bar), also a veteran of Rex and June Of 44 and founder of HiM, certainly has a good gurn it's hard to imagine him cracking out to the somnolent beat of his former outfit. Pete Simonelli, a rambling raconteur of a vocalist, is equally follically challenged, meaning they come across like a malevolent Slint staffed by entirely by John Malkoviches.

10.45pm
Congratulations to THE RAINCOATS (Centre Stage) for obliterating all before them in the quest for the accolade of Worst Band Of The Festival. Music best described as gawky and nauseatingly twee toss, cack-handed violin playing, bad jokes that fall flat: all goes to show that perhaps you shouldn't ask all of your heroes to reform after all.

11.15pm
Ah the blessed relief of good TV, and more precisely a documentary about the intersection of 80s music and sexuality - and it's on proper telly, not one of the ATP channels. To think we ever thought George Michael was a ladies' man.

12.15am
If ever there was a pointless exercise, it's a stage manager trying to give a band called ENDLESS BOOGIE (Centre Stage) a five-minute warning. Needless to say, they pay no heed to it, finishing up when they're good and ready - with Malkmus shouting "Endless fuckin' Boogie! out over feedback, he and Matt Sweeney having joined the band armed with guitars for a hastily composed ode to the weekend's festivities. If Dead Meadow and ZZ Top jamming in a bar at the end of the world is your thing (and let's face it, it should be), then you may want to investigate this lot further.

12.45am
It's reached that point in the evening when the sight of a handful of punters trying to manoeuvre grabbers into picking up soft toys is capable of prompting an assembled crowd of drunken onlookers into oohing and aahing at every near thing like kids at a firework display. With entertainment like this, who needs bands? 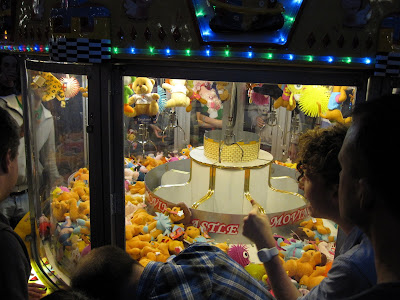 2.30am
The decision to return to the chalet after Pavement last night looks rather foolish when I discover that Faust's show involved the chainsawing of guitars. Missing Monotonix's abortive attempts to persuade their crowd to remain seated as they played in the middle of the floor of Reds is another regret - I should have known better than to pass up the chance to see a band who've been banned from the majority of venues in the hometown Tel Aviv...

5am
Is that the time? Best finish this glass of wine and hit the sack.

10.30am
Could this bus possibly take a more roundabout route? I have no desire to be sick on a pensioner.

11.30am
Taunton Station, how glad am I to see you. Saccharine Trust guitarist Joe Baiza walks past, looking about as dishevilled as everyone else - how's that possible given we've all had access to beds, showers and clean clothes all weekend? A mystery to ponder on the train journey back to reality.
Posted by Ben at 12:27 AM

Having seen them wreak destruction upon an (admittedly shabby to start with) art gallery, I find it exceedingly difficult to imagine that Monotonix would try to "persuade their crowd to remain seated". You'll have missed a lot of things worth seeing in missing a Monotonix set, but it strikes me as extremely unlikely that this might be one of them.

You should have a read of this then, Russ...

That doesn't say that Monotonix were telling people to sit down.

I get the feeling I'm missing a subtle joke, but I really can't tease it out. Or maybe an obvious one that I'm just too thick to see.

It does, in Jamie Summers' comment (17th May, 22.39): "The band did ask for the audience to sit down but people ignored it once they got started". From the sounds of his comment, he's involved with the ATP organisation side of things. The pressure to have people sitting down does appear to have come from Butlins, though.

Either way, it was a bit of a farce which I missed out on. Must keep an eye out in case they play anywhere near again - and then hope there's not a repeat!

Ah right, sorry. Missed that one, in spite of reading it through several times. The "From the horses mouth" comment seems to say different things, though. Going on the available evidence I'd be far less inclined to believe this Jamie character.

Other sitting-related Monotonix anecdotes: when I saw them the drummer sat on a stool which he then got a bunch of audience members to heft up into the air and hold. With him on it. For far longer than they were comfortable with. Given that I wasn't one of them actually holding it, it was hilarious.

Did they play in Brum, then? Their gigs sound eventful, one way or another...

Yes indeedy, they played in Vivid gallery this December just gone (it was one of Capsule's "we've been going for ten years" celebration gigs).

It was carnage. Utter, utter carnage. I didn't end up writing anything about it, but others did here and here.