I think I've just about let enough dust settle on my first ATP of the year - with Glastonbury looming large, I'd best at least make a start on the review...

12.45pm
Westward ho! With a half-hour gap between trains at Bristol Station, it appears to be pasty o'clock.

1.30pm
Standing outside Taunton Station in the drizzle wouldn't be my idea of fun generally, but when it's the Friday of an ATP weekend... Good job I haven't packed the bucket and spade, as it doesn't look as though there's going to be an opportunity to use them. Again.

3.30pm
OK, so we're hungry but can't access the chalets until 4 and are barred from the pavilion due to having bags large enough to be deemed "luggage". Yay bureaucracy!

4pm
We rendezvous with our chalet-mates for the weekend: a couple who, having returned from the Matt Groenig curated festival last weekend, suffered such withdrawal symptoms that they vowed to come back as soon as they could. It's a bit like Pitchfork nerds meeting for a blind date: "I'll be the one in the thick-rimmed specs wearing the grey Japandroids T-shirt..."

4.30pm
As is usual on the Friday of an ATP, Tesco is full of scruffy out-of-towners clearing the shelves of all the Tesco Value Vodka and boxes of red wine while being eyed up by aggrieved locals with the sort of distaste they might usually reserve for someone treading dog shit into their living-room carpet.

5.30pm
Inside the pavilion (with "luggage" now safely stowed in the chalet), we make a beeline for one of the mobile bars - which, lo and behold, has a range of ciders. I briefly contemplate whether kicking off on the "orange stuff" (aka Thatcher's Cheddar Valley aka serious loopy juice) is a wise move, but by that point I've already bought a pint and am halfway through it.

6.15pm
Credit to Brian Black, bassist for Pavilion Stage openers SURFER BLOOD, for adhering to the ATP dress code of moustache and jumper. Not quite sure what's possessed percussionist Marcos Marchesani to grow his hair long and curly and wear something resembling an Argentina shirt, but presumably it's some kind of tribute to Fabricio Coloccini. As for the band themselves, think Weezer with fewer hooks and a lot more reverb, and bemoan the fact that mere mention of the word "surf" is enough to garner attention at the moment (at least Wavves and The Drums are worthy of it). "You guys are rad!", declares guitarist/vocalist John Paul Pitts. Wish I could say the same. 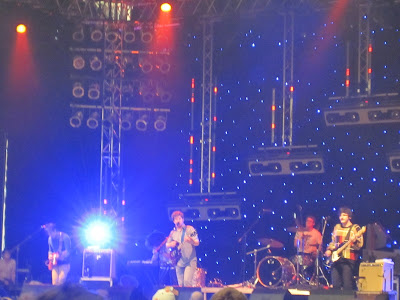 7pm
Now this IS worrying: Scott Kannberg aka SPIRAL STAIRS (Centre Stage) appears to be suffering from a rather public and excruciating mid-life crisis. The yang to Stephen Malkmus' more dominant yin in Pavement, he branched out on his own post-split with two Preston School Of Industry albums but had been relatively quiet until last year's LP The Real Feel. And here he is, wearing a flat cap and in the company of some jobbing musicians trundling unconvincingly through that record's mid-paced bland-o-rama. It's telling that he has to try to persuade us that things really are picking up, and that only 'Whalebone' (from first PSOI album All This Sounds Gas) actually manages to raise the tone. 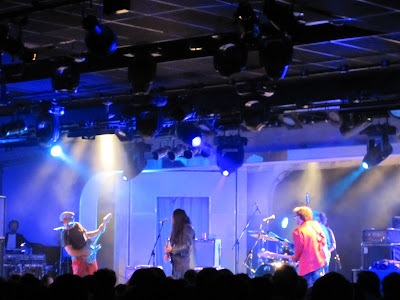 7.15pm
A member of our party is approached by a stranger and asked cheerily: "You don't see many men of colour at All Tomorrow's Parties, do you?" The next question, inevitably, is whether or not he has any drugs for sale...

7.45pm
While it feels disrespectful to the ATP hosts to turn your nose up at their side-projects (see Spiral Stairs above), it also always feels a bit rude to express indifference, boredom or downright dislike with respect to their favourite artists. Malkmus has long proclaimed his love for CALEXICO (Pavilion Stage) - but while some of their hip-shaking rhythms have a seductive quality, their segue into an Eagles-esque version of 'Love Will Tear Us Apart' is an unexpected joy and it's novel to be made to feel like you're in a Tarantino movie, they're not a band whose back catalogue I have any great desire to explore. 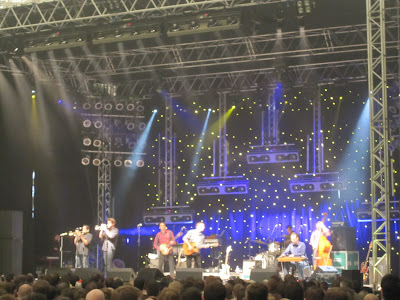 8.15pm
Credit to THE WALKMEN (Centre Stage). Being ambushed by a complete onstage power failure just as you're kicking into your signature tune is unfortunate to say the least, but the New Yorkers refuse to let the interruption derail them. Far from it - when they return five minutes later, 'The Rat' is both electrified and electrifying, the sound of The Strokes being zapped in the bollocks with a cattle prod. Not that the pace and intensity dips noticeably afterwards, suggesting that forthcoming fifth LP proper Lisbon may be worth investing in. 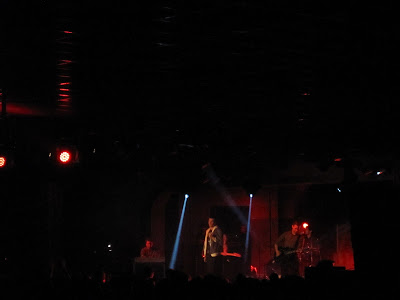 9.15pm
I'm starting to think I'm very much in the minority in regarding their albums as frustratingly patchy and semi-realised, but surely no one can dispute the fact that BROKEN SOCIAL SCENE (Pavilion Stage) give damn, damn good live show. Kicking off in perfect fashion with the gargantuan anthem 'World Sick', the Canadian collective take the opportunity to show off most of new album Forgiveness Rock Record's best tracks ('Forced To Love', 'All To All' with big-haired Lisa Lobsinger taking centre stage, 'Texico Bitches' featuring guest vocalist Spiral Stairs) - though older favourites 'Cause = Time', '7/4 Shoreline' and 'Fire Eye'd Boy' all also put in an appearance.

9.30pm
Nipping to the toilets during one of Forgiveness Rock Record's duds, 'Art House Director', I'm hailed with a cheery "Hey, how's it going? Not seen you for ages!" from Los Campesinos! guitarist Tom. Always nice to be recognised by rock stars...

10pm
Somewhere I read a review of Forgiveness Rock Record which described 'Meet Me In The Basement' (no relation to the Strokes song 'Meet Me In The Bathroom', incidentally) as pointless. I'd like to grab that reviewer by the neck and drag them here, now, and dare them to argue that case. Talk about going out with a bombastic bang. 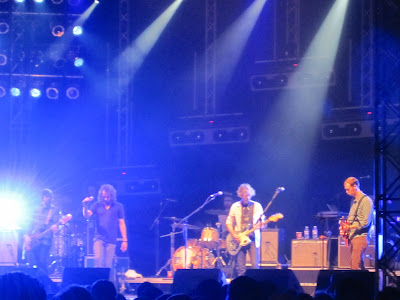 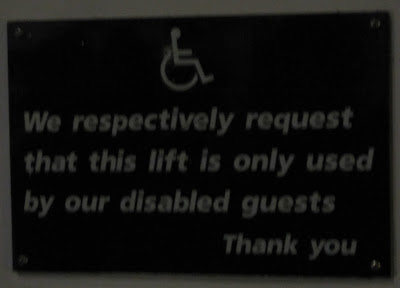 10.30pm
This being ATP, it's about time I made the acquaintance of an ageing punk band. Over the course of last year's bashes that meant Wire, Gang Of Four, Buzzcocks, X and The Membranes - tonight it means MISSION OF BURMA (Centre Stage). Call me a peasant, but I know precious little about the Bostonians other than that they are afforded a chapter in Michael Azerrad's excellent Our Band Could Be Your Life, like Wire, their reformation has actually heralded a host of new albums (so they're not prepared to trade solely on reputation and nostalgia), that Shellac's Bob Weston is now a sometime member and that both Moby and Graham Coxon have covered their 'That's When I Reach For My Revolver' to good effect. My initial inclination, then, is favourable - but there's an irritating shapelessness about them that detracts from any visceral impact and I'm left disappointed. 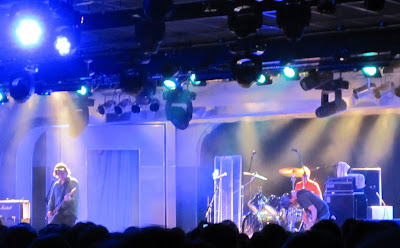 12midnight
In the battle of Quasi v cider back at the ranch, the latter wins out. Perhaps not the smartest decision, as it turns out.

1.30am
Suicide, Spacemen 3, 13th Floor Elevators, Neu - WOODEN SHJIPS (Centre Stage) certainly call in at all the right ports. But by this point I'm in no fit state to pass sound judgement, metaphorically clinging onto the floor like a queasy landlubber, while the San Franciscans' repetitive drowsiness-inducing drones send me headlong towards the land of nod. Bed - for once - seems like the best option, even at this early hour. Oh the shame - a shame magnified when, on the way back to the chalet, I pass up the chance to spend some time in the company of Mogwai's Stuart Braithwaite, DJing at the Irish Pub. 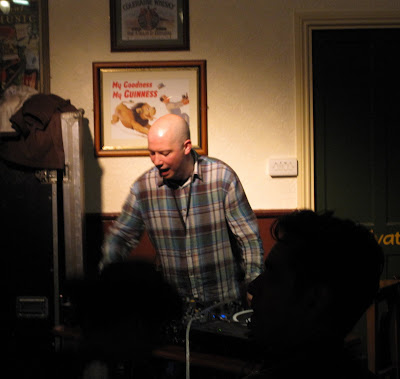