Minutes from the best part of a week spent in Dubrovnik in southern Croatia...

* I might have been suspicious of somewhere where roasted peppers and aubergines were considered part of a normal fried breakfast, where your surroundings were (apparently) "laced with art and design mixing ethno techno rock", where tomato soup delivered to your room cost the equivalent of a tenner and where all the fire extinguishers were clothed in hessian bags as though with a very Victorian sense of decorum, but really our hotel couldn't be faulted - and especially not the view of an azure Adriatic from our balcony. 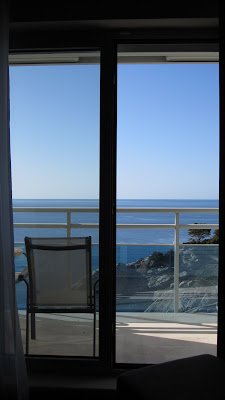 * Lounging around in a dressing gown and slippers in the middle of the day? Breakfasting in the company of fellow guests wearing their pyjamas in public? As former residents of Cardiff, we took this 5* hotel malarkey in our stride.

* "Should you require any personalised services, please feel free to contact any of my staff. They will see to it that your wishes are fulfilled". Hang on, I thought, was I being welcomed by the hotel manager or a pimp?

* The Old Town is picture-postcard stunning - hard to imagine at first, then, that 68% of the 824 buildings within the city walls were damaged by the bombardment which took place during what's referred to locally as the "Homeland War" of 1991-2. The restoration work has been remarkable. But look a bit closer - at the cracked flagstones and depressions which bear daily witness to the devastating effect of the shelling, at the Defenders of Dubrovnik memorial exhibition - and you realise that it all took place less than 20 years ago. Little wonder that passions haven't yet completely subsided. 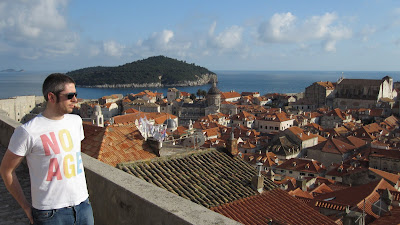 * Lokrum, just a 15-minute boat ride from the harbour, is the perfect place to get away from the crowds (or it is in April, at least). If you're lucky, you'll be greeted by the sight of peacocks and peahens forming a welcoming committee on the jetty. If you're unlucky, you'll be greeted by the sight of a naked German pensioner looking for the island's nudist beach. 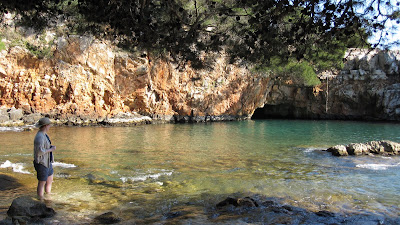 * Our excursion to the beautiful Elafiti Islands slightly further to the north began in bright sunshine but was curtailed with only the nearest two of the three (Kolocep and Lopud) visited when the weather turned. Surveying the cloudy skies and merely moderate swell, Jen delivered her succinct verdict on the decision to head for home: "This is why Britain ruled the waves"... Still, the journey back to port was enlivened by the consumption of copious quantities of very low-grade box wine. 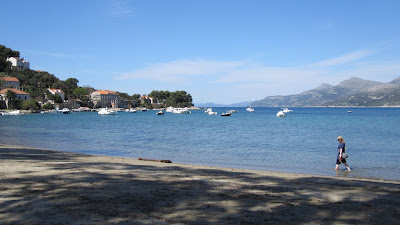 * I was expecting Dalmatia to be full of Dalmatians, but it turns out that Dubrovnik at least is overflowing with cats. They were everywhere: in gardens, reclining in the shade of orange and lemon trees; basking on roofs; strutting along the city walls; sitting patiently beneath chairs at the harbourside restaurants waiting for tasty titbits to be dropped; even in a hole in the wall by the main gate, where a mother cat seemed to push her cute kittens to the front to maximise the chances of a swooning passer-by depositing a pile of deep-fried whitebait...

* I'm still not sure whether the Gaffe, one of at least three Irish pubs in the Old Town, should have been called the Gaff, or whether it was actually christened the Gaffe as a very clever joke?

* Buza may have sounded like an East End pub on the Costa del Crime owned by Ray Winstone, but actually turned out to be a charming bar accessible via a narrow alley through the city walls and perched precariously on the cliffs but offering a fabulous vantage point looking out to sea. 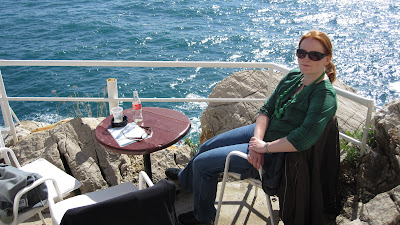 * But even Buza can't claim the prize for the most idiosyncratic drinking establishment in Dubrovnik - that prize is comfortably carried off by the always-lively Troubadour, which describes itself as a "hard jazz caffe", which accommodates about 15 people at most (though there is some seating in the square outside), and which essentially functions as a stage for the considerable crooning talents of owner Marko and barman Nick. 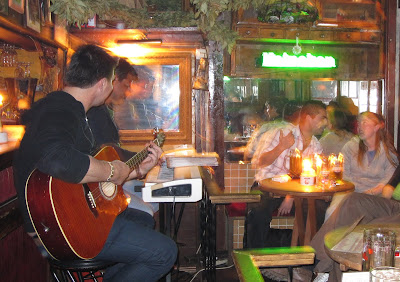 * Croatia furnished me with further evidence, in the form of Ozujsko and Karlovacko, that wherever in the world you go, the local cooking lager will be infinitely superior to bloody Carling.

* There's nothing quite so disconcerting as chomping into something to discover it's far, far from what you expected it to be. Looked like a jumbo sausage roll, turned out to be a kind of pain au chocolat...

* Menus were regularly a thing of wonder. I took a gamble that something had been lost in translation in ordering steak with "green paper sauce" on the first night, while it amused us that the Croatian for peanut and whipped cream is "kikiriki" and "slag" respectively. (Which reminds me - we should have brought some "peanut flips" (essentially peanut-flavour Wotsits) home with us.) Never did find out exactly what was in the three peculiarly enigmatically named cocktails served in one of the bars, "White Night", "Owner" and "You Will See".

* A tip-off from experience (not ours, but of another pair of British diners): if you decide to do as the Croatians do and, er, eat Mexican, don't have the temerity to complain about the food or speed of service in Chihuahua Cantina Mexicana - you might get the chef haranguing you at your table and threatening to call the police if you don't agree to pay in full...

* And the award for best meal of the holiday goes to vegetarian restaurant Nishta. The name translates as "nothing" - when it opened, so our (largely) trusty guidebook told us, curious locals were informed that it served everything except meat, which they concluded meant nothing... The menu ranges across countries and continents (falafel, chow mein, quesadillas) and they also do a mean chocolate fondue, but what impressed Jen the most, I think, was the pink grouting in the toilet...

Thanks for the memories

Spying a chubby 12-year-old boy wearing a T-shirt that read "I don't need sex - the government fucks me every day"? Watching a nun get arrested? Discovering that Jen thought 'Rockin' In The Free World' was by Shakin' Stevens?

Nah, the most memorable part of the holiday was the Monday evening - celebrating my beloved and for once blessed football team's promotion back to the "big time" ((c) Sky Sports) by slugging pitchers of pivo and shots of walnut brandy, being serenaded by Nick's rendition of 'Fly Me To The Moon' in the Troubadour and finally being gently dissuaded from clambering into a medieval fountain... 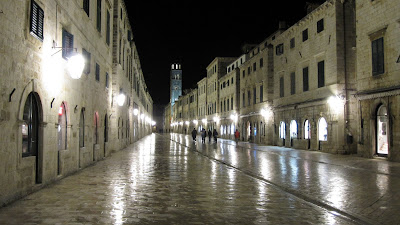