12.30pm
I crawl out of bed hungover to hell to find the rest of our party watching the first Harry Potter film overdubbed with commentary by "someone who sounds like Dennis Hopper's character in Apocalypse Now". "The snow", he drawls, "was falling like angel shit". I'm flabbergasted to learn that one resident of our chalet has been up since 10am and enjoyed a leisurely morning swim. That's just plain wrong.

1.30pm
Next up, after the usual swirly patterns and fuzzy images that pass for continuity links on ATP TV, it's Beardo, a cartoon about suicide.

1.45pm
Turns out that Coke is still fizzy on the way back up. Who knew?

2.15pm
I'm missing Papa M in favour of an American documentary from the late 1970s called The Possibility Of Romance In The South During An Era Of Nuclear Proliferation. Trying to leave the sofa would, I fear, be too traumatic.

3.15pm
It may be mid-afternoon, but AFRIRAMPO (Pavilion) are still an electrifying wake-up call. A fearsome clatter of percussion, distortion, shrieks and yelps, the mad-as-a-box-of-particularly-mad-frogs Japanese duo - who, tellingly, have previously supported both Sonic Youth and Lightning Bolt - show no mercy to those of us still feeling rather delicate. But you know what? It's all really rather marvellous - from the sparkly Santa's little helper outfits, through the stilted explanation of a song about stars being things that you can see but that no longer exist, to fleet-of-foot drummer Pika actually running over her drumkit to get back into position. 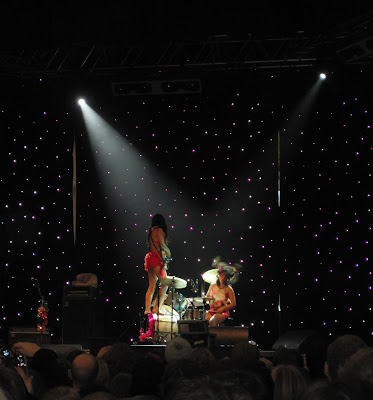 3.45pm
My reign of glory on the air hockey table is brought to an abrupt end. Good while it lasted, at least.

4pm
Impeccable festival logic dictates that the money I've saved on not buying lunch should be spent on a pair of T-shirts, one a blue Fuck Buttons number and the other a commemorative print listing every band to have played ATP over the course of its ten year history. My companion, meanwhile, gets to chat to Dave Pajo at the merch desk. What to say when your hero hands you his latest offering, an album he's been working on for some time which he warns you is rather different to his usual fare? Probably not "Oh, don't worry, if I don't like it it's only two quid"... 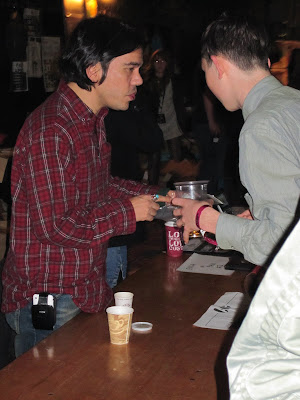 4.45pm
OK, gather round everyone (including Mascis and pal just in front of us) - it's Story Time with Warren Ellis. Looking once again like a businessman fallen on very hard times who's pawned his razor and shoes to buy PCP, he thanks ATP's Barry Hogan for one of the best weekends of his life last weekend, but confesses that it was nearly his last - with his convector heater cranked up full and a suitcase blocking his door, he was nearly "cooked like a fucking hotdog". If I didn't already consider myself lucky to be getting a second helping of DIRTY THREE (Pavilion) in the space of seven days, then I certainly do now. Ocean Songs classic 'Sea Above, Sky Below' is the set's tempestuous musical highlight, followed closely by 'I Remember A Time When Once You Used To Love Me', while Ellis, watched by a bemused Mick Turner and Jim White (the latter, it's pointed out, the spit of Robert Winston), advocates rounding up emo kids and setting them to work in chip shops before Afrirampo appear to distribute balloons into the crowd. "This isn't a Flaming Lips concert", Ellis advises. "It's about as close as we've come to pyrotechnics in our 20 years..." 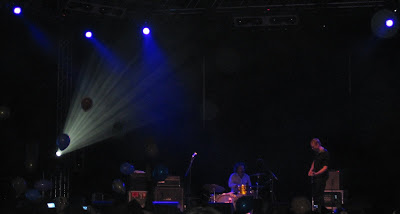 5.45pm
Hands up who behind the scenes at ATP can't even get the names of all the bands on the bill right? 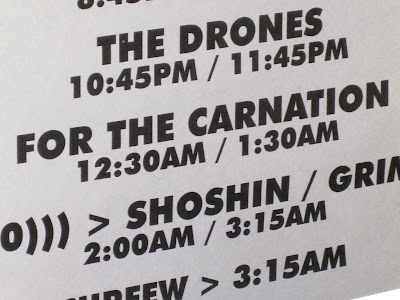 7.15pm
Indifference remains my overriding response to BATTLES (Pavilion) too - though I'm clearly in the minority. 'Atlas' aside, it remains a mystery to me why they're so (relatively) successful, popular and acclaimed - being neither danceable nor especially exciting. Plus Tyondai Braxton's heavily treated vocals get increasingly irritating. Still, I suppose if there's a place where their masturbatory tendencies are going to be indulged or indeed applauded, then it's here. 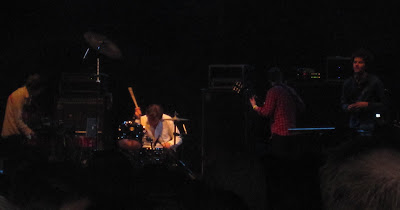 8pm
There can't be many musicians instantly recognisable by silhouette, but Buzz Osborne is one such individual. The imposing figure with the extraordinary grey Sideshow Bob hair is one of rock's older and most eminent statesman, the band of which he is the sole remaining founder member, MELVINS (Centre Stage), having been bothering eardrums and picking up unholy disciples for more than 25 years. King Buzzo has claimed their own influences lie mainly in punk and hardcore, but in truth these are largely only nodding acquaintances, their thick-set metal bludgeon on closer and more familiar terms with the work of another musical Osbo(u)rne. Melvins currently number four, with Willis and bassist Jared Warren (clad in "suburban turban") accompanying King Buzzo and Crover, but at the climax of a pummelling and exhilarating set four suddenly becomes six as two more drummers are wheeled out. Yes, that makes four drummers in total. Well, as their notes in the programme begin: "Remember, anything worth doing, is worth overdoing!" A motto they clearly live by. 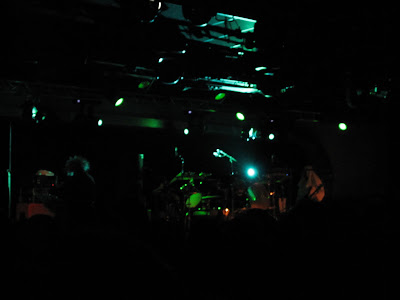 8.30pm
"Sean Connery's wearing Y-fronts and wandering around with a gun and everyone's naked". Well, that's a fairly succinct precis of Zardoz, the current offering on ATP TV.

9pm
And here's one we made earlier: homemade veggie chilli, served up with all the accompaniments and devoured by mouths grateful to be spared more overpriced fast food.

10pm
Oops I fell off the wagon again - albeit by sipping very gingerly at a VK Ice.

10.15pm
It's noticeable that ATP Recordings acts have been handed primetime slots - but then it's ATP's party and they can fix the bill in their favour if they want to. Exhibit A: APSE, making the first of two appearances in Reds Bar. At least I think it's Apse - it's hard to believe that the band who stand before us are the same band responsible for Spirit. But 'tis indeed they, and a set heavy on new material from its successor Climb Up proves a real disappointment, suggesting an abandonment of Spirit's atmospheric, tribal and frequently fascinating post-rock in favour of bland structure and convention.

11.15pm
Exhibit B: THE DRONES (Centre Stage). I first came across the Australians when invited to review their third album proper for the final issue of the Vanity Project fanzine - and what a serendipitous encounter that turned out to be. Gala Mill revealed itself to be stuffed with extraordinary bruised and nauseous blues - sometimes scorching and violent, sometimes slow and skulking along in the dust, latent with menace like an alternative to Nick Cave and Warren Ellis's soundtrack for The Proposition. Follow-up Havilah hasn't impressed to date, but theirs has still been one of my most eagerly anticipated sets of the weekend. Opener 'Jezebel' sets the tone perfectly for an hour during which the sombre, country-tinged side of their nature is suppressed in favour of the more aggressive and fiery. Gareth Liddiard's heavily accented vocals may be offputting to some, but there's no denying his capabilities as a guitarist. The only regret is that we aren't treated to 'Sixteen Straws', Liddiard bemused why we'd want to hear a nine-minute-long narrative about murderous pacts among convicts. That would be Gala Mill's predecessor Wait Long By The River And The Bodies Of Your Enemies Will Float By added to the lengthening post-festival shopping list, then. 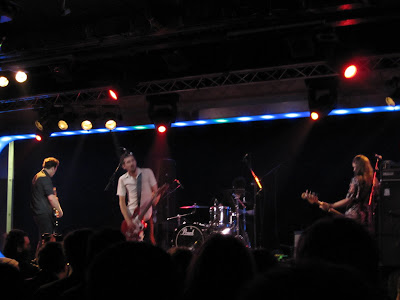 12midnight
Why is it that, despite all that's going on, I still feel compelled to return to the chalet to watch highlights (such as they are) of a frustrating 2-2 draw with Barnsley on The Football League Show?

1.45am
It gets worse - now we're subjecting ourselves to N-Dubz, who are on the repeat of Friday Night With Jonathan Ross promoting their anti-teenage pregnancy single 'Shoulda Put Something On'.

2.15am
I doubt whether the phrase "And now for something completely different..." has ever been more appropriate. Amps stacked up to scrape the ceiling, billowing and almost impenetrable clouds of smoke, monks' cowls, claw hands raised aloft among the crowd, stupendously loud leaden-footed slow-motion chords that rattle your ribcage - hello there SUNN O))) (Centre Stage), how do you do? A few questions spring to mind. Are the pair of them tight musically? Can fans really make out what they're playing (supposedly it's debut LP The Grimmrobe Demos from start to finish)? And who thought they would be a good choice for the last band of the night? All the same, surrounded by people either swaying on the spot, clutching their ears or dancing about with glo-sticks, I must admit it's bizarrely compelling - for a while, at least. 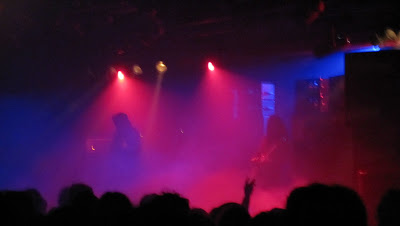 2.45am
Finding a small gap in the netting, a handful of resourceful (not to mention drunk) punters have infiltrated the kids' play area in the Pavilion - much to the displeasure of a security official who, threatening the perpetrators with immediate ejection from the site, looks as though he might blow an artery any minute. Imagine how furious he'd be, then, if he realised that there are still some determined souls holed up in one of the tunnels on the first level...

4am
Talking Heads, The Smiths, Althea & Donna, The Arcade Fire, The Jackson Five - why can't there be a Crazy Horse disco in Abingdon? It even seems to have miraculous healing properties, judging by the girl merrily dancing on crutches.

4.30am
Belle & Sebastian's 'The Boy With The Arab Strap' convinces us to call it a night, and we head back to the chalet - past a casualty being attended to outside Burger King (excessive intoxication or just a bad Whopper?), past the awful portraits, past Dirty Three guitarist Mick Harvey's rather better pictures in the temporary gallery. 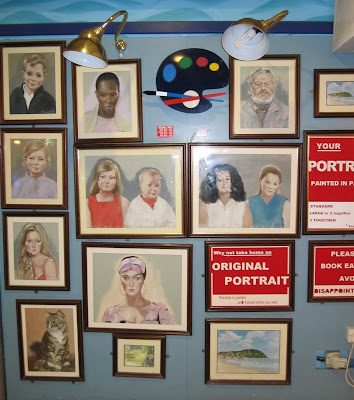 5.30am
Dwarf patchwork zombies and a metal ball that flies around cutting people up and drilling into their foreheads? Thanks to Phantasm for ensuring those images are seared onto my retina as I close my eyes.
Posted by Ben at 1:54 AM