Suffice to say that this particular birthday party was rather less pass-the-parcel, candles on cakes, and jelly and ice cream, and rather more intoxication, nudity on TV and ear damage...

4.30pm
A word of advice to residents of Minehead: unless you actually enjoy grumbling and tutting disapprovingly at hoodied oiks clearing the shelves of Tesco Value vodka, the Friday afternoon of an ATP is not a good time to go supermarket shopping.

5.30pm
This weekend's chalet is significantly further away from the pavilion towards the fringes of the site (though in real terms that only means another three minutes of walking) and - a novelty - is on the first floor. Navigating stairs will be a whole new challenge. After last weekend's deprivation, though, we're grateful for the sight of a kitchen and living room - or, to be precise, a fridge to stock with booze and some sofas to slump on.

6pm
And, even better, our telly is working. Time to take our first dip into ATP TV: a French film with subtitles featuring a swirling cup of black coffee viewed from above while someone witters on about subjectivity and objectivity, and then characters wrestling with profound existentialist issues while their Mini gets a service. E4 it ain't.

6.15pm
Our walk back to the pavilion takes us past the long low building housing the catering facilities exclusive to festival staff (shame - I could have fancied investigating what's on offer at the Soup Deck) and Yacht Club 2. "The revenge" comes the quip from one of my companions.

7pm
It's a measure of quite how strong the weekend's line-up is that the very first band we see were responsible for my favourite album of 2008. OK, so STEPHEN MALKMUS & THE JICKS (Pavilion) don't hit the heights of their 2007 Greenman performance despite the presence of several of Real Emotional Trash's high points in the set ('Gardenia', 'Hopscotch Willie', 'Elmo Delmo' and a particularly fine 'Baltimore'), and the band's brilliant former Sleater-Kinney tubthumper Janet Weiss seems to be a bit narked about something. But Malkmus himself is in good form, opening brightly with 'Jo-Jo's Jacket' from his first solo album and goofing around throwing T-shirts out into the crowd. The new songs - the most memorable of which concerns a senator's predilection for, ahem, oral stimulation - suggest a turn away from the fluid jammy style of Real Emotional Trash back towards the whimsical off-kilter indie rock of his earlier material, and sets me wondering whether they'll be making another appearance when Pavement curate in May. But enough of that - we've got the whole of THIS ATP in front of us. "Baby c'mon!" indeed! 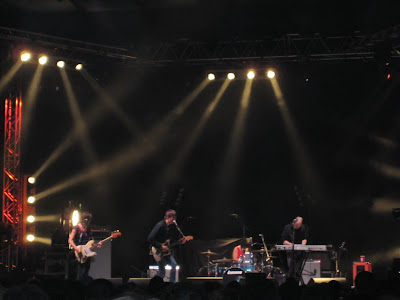 8pm
Sometimes the element of surprise and unpredictability is overrated. Just under a week ago, on this very stage, I saw J MASCIS & THE FOG (Centre Stage) perform an identical set to the one they're blasting through now, but when that means 'Set Us Free' and 'Ammaring' plus Dinosaur Jr classics 'Thumb' (minus flautist, this time) and 'The Wagon', let's just say you're not going to hear me complaining. If anything, the anticipation is all the greater, knowing that 'What Else Is New' will be the cherry atop a very tasty cake. 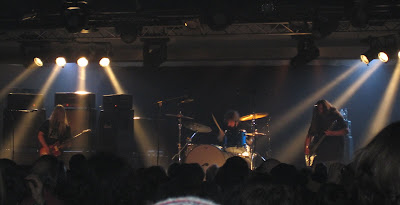 9.30pm
We should have had a sweepstake on how many hours into the festival it'd be before one of us would overhear someone say in exasperated disbelief "Why's there a queue for the gents?" As a question that marks you out as an ATP virgin, it's right up there with "Wow, are Shellac really on the bill?"

10.15pm
Can 35 minutes be considered fashionably late? That's how long YEAH YEAH YEAHS (Pavilion) keep us waiting before a visibly refreshed Karen O bounds out in a typically bedazzling red dress, cuts sharply through the muted grumblings and boos and sprays champagne about with the abandon of a delirious Formula 1 race winner. There follows a strident romp through debut LP Fever To Tell in its entirety - 'Date With The Night', 'Maps' and 'Y Control' are the inevitable peaks (see my above comments about surprise and unpredictability), though most of the tracks are a timely reminder of the frisson of vigour and excitement largely absent from much of It's Blitz!. By the time 'Modern Romance' tails off, their tardiness has long been forgiven, and our response to a riotous encore of 'Zero' (curtailed deliberately half way through), 'Heads Will Roll', 'Our Time' and Show Your Bones' centrepiece 'Cheated Hearts' - all performed as a foursome with their current touring guitarist, one Dave Pajo - makes a mockery of the claim that "It's our time to be hated". 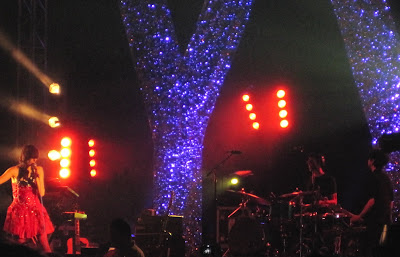 11.15pm
All of which showmanship renders SIX ORGANS OF ADMITTANCE (Reds Bar) sadly stale and flat. At Greenman two years ago, accompanied only by Magik Markers' Elisa Ambrogio, Ben Chasny was electrifying, but now with a full band the performance seems merely workmanlike, even when it takes a more freeform tangent. Oh for the intense headfuck assault of his other outfit, Comets On Fire.

12midnight
Look up the word "danceable" in the dictionary and if you're lucky enough to find it, chances are the definition won't read: "See Tarot Sport". But the second offering from Bristolian power electronics duo FUCK BUTTONS (Centre Stage) is - thanks in part to the involvement of Andrew Weatherall on production duties - comprised of songs to which you are compelled to move, even if that movement is merely a slow sway (which, incidentally, is about as much as I can muster at this point). Fuck Buttons' raison d'etre appears to be to demonstrate that noise needn't always be abrasive and misanthropic - on the contrary, it can actually be welcoming and enveloping. It's hard to describe or pinpoint, but there's something unmistakeably and inherently natural about the tension and release, the raging tumult and soothing washes, of their material. Hunched over and facing each other, separated only by an enormous rotating mirrorball, Benjamin Power and Andrew Hung are as lost in the moment as the rest of us, delivering a dose of hands-in-the-air-like-you-just-don't-care euphoria that tingles up and down the spine and leaves us with a nice warm feeling inside. Or maybe that's just the beer. 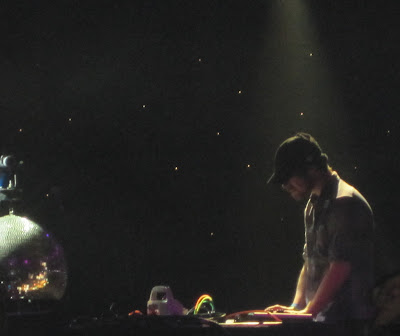 1.30am
Back at the chalet dazed and disoriented, I'm unable to discern what's going on in the film showing on ATP TV - something to do with Japanese Catholics, perhaps? - and then burn the sleeve of my sweater on a grillpan when using it in lieu of oven gloves to rescue some chicken goujons (aka tea) from incineration.

3.30am
A perfect state in which to go to the Crazy Horse disco, then. More drinking, drooling and stumbling about ensues. There's a stage invasion, and my one still-standing partner-in-crime and I are tempted, but - whether struck by a perverse sense of decorum or simply doubting our mutual capacity to clamber up unaided - we search in vain for some steps, before giving up and deciding that the only way is not up but homewards. 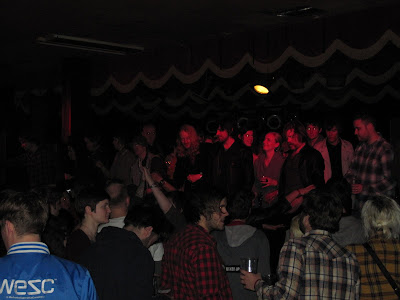