My bloody ears: ATP Nightmare Before Christmas curated by My Bloody Valentine

And so it begins - the first of six installments looking back on two ATP festivals on two consecutive weekends...

12noon
A little tip for you: if ever you want to attract disapproving looks, dress head to toe like a scruffbag, go into Waitrose on a Friday lunchtime when middle-aged middle-class Abingdon is doing its weekly shop and buy nothing but cider, wine and crisps. Works a treat.

4pm
We're on the road to Minehead, as the Talking Heads sang before deciding "nowhere" made for a better lyric. Beard, hoodie, band T-shirt (especially appropriate given the date), copious quantities of alcohol - yes, I think I'm prepared. Baden Powell would be proud. Perhaps.

6.15pm
Bad traffic - we're going to be later than anticipated and the festival's already well underway. Don't get me wrong, I don't want to stop the rock - just delay it until a more convenient time.

7pm
Ahoy there, it's the Bakelite Museum, a welcome beacon in the darkness that tells us our destination is near at hand.

7.30pm
Onsite, at last. Cracking out a bottle of wine, I survey the damage done to best-laid plans. We've missed Josh T. Pearson, we've missed De La Soul (even though they were running late themselves) and, worst of all, we've missed the heavy Sabbath groove of Witch and thereby an opportunity to see Dinosaur Jr guitar god J Mascis return to where he began with hardcore band Deep Wound in the early 80s - sat behind a drumkit. Still, at least the chalet - despite having no kitchen or living room this time - is better than expected.

7.45pm
Ah, spoke too soon - thanks to a faulty aerial, it looks as though we're going to be deprived of the delights of ATP TV. No Gap-Toothed Women, then.

8.45pm
Barely an hour into the festival and courtesy of an untimely jostle I'm already wearing half a pint of lager. Still, better that than the fate I later gather Primal Scream's Bobby Gillespie is experiencing at about the same time - being hit smack in the face by a full pint of water. It would have been worth watching them for that - almost.

9.15pm
This being ATP, it's no great surprise that my first band of the weekend introduce themselves with a 15-minute-long jam comprised largely of feedback that has the bar staff assuming the familiar scowl or pained grimace. Well hello there YO LA TENGO (Centre Stage), how've you been? 'And The Glitter Is Gone' is just one of the songs which has my initial frostiness towards new album Popular Songs melting away, 'Here To Fall' and 'Nothing To Hide' being but two others. There's plenty of older material too, most notably 'Tom Courtenay' second in, but - infuriatingly for one of our party - no 'Sugarcube'. Ira Kaplan might live to regret announcing their chalet address - I'm having visions of a drunkard banging on their window in the early hours to complain... A beautifully constructed set is brilliantly bookended by 'Pass The Hatchet, I Think I'm Goodkind', and as Georgia Hubley and James McNew provide a rhythm section platform for Kaplan to mangle his guitar once more - shaking it, bashing it, whirling it around his head - there's only one thought in my head: yes, it's good to be back. 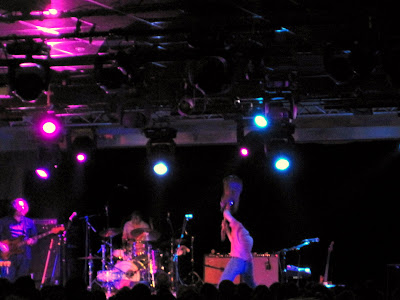 10pm
Contact finally made with The Quiz Blogger, but he's been up for the best part of 48 hours and so is hitting the hay. Boo.

10.15pm
I don't suppose the staff working in the chippy Finnegans get asked whether their fish is line-caught very often...

10.30pm
Nearly £6 for a Burger King meal that's about as nutritious and appetising as it would have been to have just eaten the cash instead? Yup, safe to say we're missing the joys of a kitchen already. 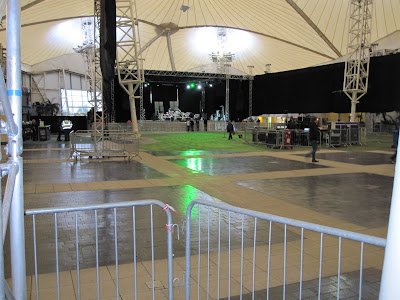 11pm
Our advance party missed out on My Bloody Valentine wristbands for tonight's show (to be explained...), so what better way to spend the interlude than by having a hastily convened chalet party, necking cider and getting introduced to Can?

12.30am
S-M? That would be SERENA-MANEESH (Reds Bar), not Stephen Malkmus and his Jicks putting in an impromptu appearance a week earlier than scheduled. A shame too, for while the Norwegians open in promising fashion, the allure of their throbbing, motorik, partly electro take on Spacemen 3, Neu! and our blessed curators MBV soon palls. Hilma Nikolaisen is an arresting figure, though, the band's very own waxwork Nico.

1am
By contrast, THE BUZZCOCKS (Centre Stage) kick off slowly but just get better and better. The usual sceptical reservations - about the fires of youth having burned out leaving old men playing pub rock - are duly obliterated as, with pumping fist and lolling tongue, I vow to invest heavily in the Mancs' back catalogue. 'Ever Fallen In Love'? Er, yeah, you could say that, though on this occasion not with someone I shouldn't have. 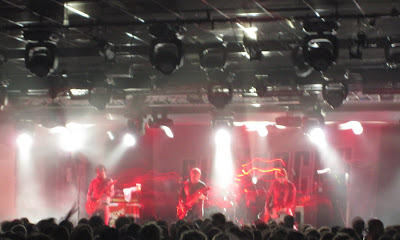 2.15am
C'mon, Mr Crazy Horse DJ, I can appreciate these disco and soul tracks you're spinning are all rather good, but is it too much to ask for something we actually know? Maybe everyone else really DOES know it, though - maybe we're the only ones in the dark. The ATP Musical Inferiority Complex strikes! Mental note (written in shaky mental pencil on a slate which may have erased itself by morning): do not under any circumstances decide it would be worth competing in the Sunday afternoon music quiz...

3am
Mascis sweeps by with his entourage (including one bloke sporting a denim waistcoat). I briefly contemplate stopping him for a chat but then decide against it on the basis that I'm too drunk for rational conversation. Plus that drawl would have probably made me laugh.