10am
It feels like Gas Mark 6 in the tent. Might we be in for a scorcher perchance? I emerge mole-like from the tent, blinking in the sunlight. 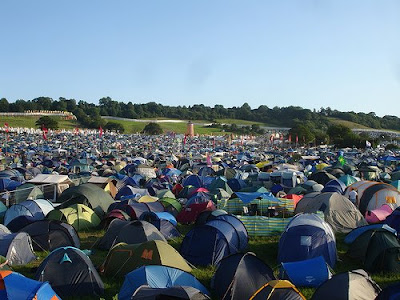 11am
There's something about that period before the bands kick off, when everyone's still waking up and shaking off their hangovers, that brings out the daftest conversation. One minute we're having shared visions of Robert Mugabe and Nicholas Cage fighting it out in a pit, and the next Dan's describing someone who paid £180 for two tickets to see Michael Jackson as "a bit morbid"... 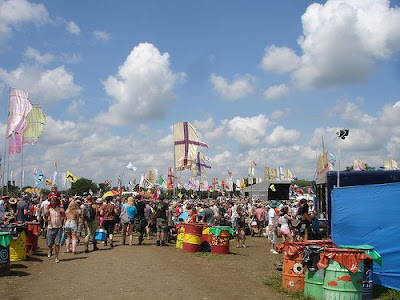 12noon
By this stage of proceedings, an island of grass is a precious commodity to be seized and stoutly defended. 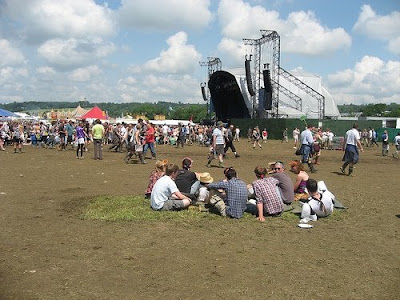 12.30pm
Really, it's the height of laziness. Unlike fellow Swedes ABBA, PETER BJORN AND JOHN (Other Stage) couldn't even be bothered to use their initials. And that's not to mention the backdrop, which is simply plastered with the word "BACKDROP"... There are introductions, but I'm still not sure who's who. Which one's the chap on bass who looks like Josh Brolin's character in No Country For Old Men? Which one's the guitarist in the powder blue jacket scissor-kicking his way through the set? I've heard that Living Thing, the follow-up proper to 2006's expansive indie pop gem Writer's Block (discounting last year's instrumental release Seaside Rock), attempts to strike a precarious balance between oddball pop and arty experimentalism, and the doomy-piano-led electro of 'It Don't Move Me', disjointed kiddie-chorused single 'Nothing To Worry About' and strangely sinister 'Just The Past' bear that out. Predictably, it's 'Objects Of My Affection' and a Victoria-Bergsman-less 'Young Folks' that sends us away happy, though.

1pm
Outside a stall, a sign next to some rugs: "Good for shagging on or your money back". Wonder how many soiled rugs they get returned?

1.15pm
My first Welsh oggie of the festival - cheap and huge, as ever, but sadly a real disappointment when it comes to flavour. In the battle of the baked goods, it's a very definite victory for Pieminister.

1.45pm
If Peter Bjorn and John's set was eclectic and at times obtuse, for the EAGLES OF DEATH METAL (Pyramid Stage) there's no deviating from the straight and narrow highway of low-down, no-good, bad-ass hard rock boogie. Josh Homme, like Jesse Hughes a co-founder of this 21st century ZZ Top, is nowhere to be seen, but there are former Queens Of The Stone Age Dave Catching on guitar (flying V, of course) and Joey Castillo on drums. Bassist Brian O'Connor, meanwhile, looks like Trigger from Only Fools And Horses after two bottles of bourbon, a bar brawl and no sleep. The aviator-wearing horseshoe-moustached Hughes has played the part of the lascivious rock star in the past (wonder if Michael Eavis has heard his claim "I didn't come here to save the fucking whales, I came here to shake my dick and have a good time"?), but today he's on best behaviour - can you imagine Lemmy admitting he's avoiding swearing to avoid upsetting his onlooking mum and then bringing out his son for the final bow? 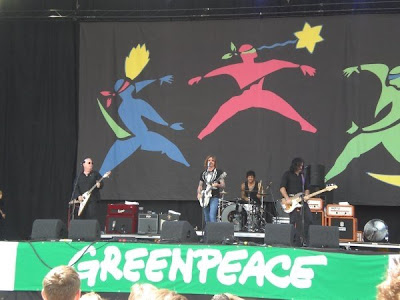 3.30pm
From one band who understand that rock 'n' roll is inherently ridiculous to another for whom that ridiculousness is their very raison d'etre. Messrs St Hubbins, Tufnel and Smalls take to the Pyramid Stage with the best banner of the weekend to greet them: "GLASTONBURY WELCOMES SPANIEL TAP". St Hubbins is the nominal frontman, but the tussle for the limelight is definitely between an eyelinered Smalls, proudly sporting an official Tap T-shirt, and Tufnel, who chews gum throughout and whose facial contortions during the solos have me bent double with laughter. Nestled in amongst the familiar hits - 'Hell Hole', 'The Majesty Of Rock', 'Gimme Some Money', a funked-up take on 'Sex Farm' - is an excerpt from the proposed musical Saucy Jack, but the biggest cheers are reserved for Tufnel's ethereal epic 'Stonehenge' (cue dwarves and miniature models on stage and in the crowd) and set closer 'Big Bottom', which has me rubbing my eyes in disbelief at the sight of Jarvis Cocker playing one of four basses as a selection of welly-wearing lady festival-goers shake their booty around the band. Mark my words, that Burrow Hill cider's potent stuff. 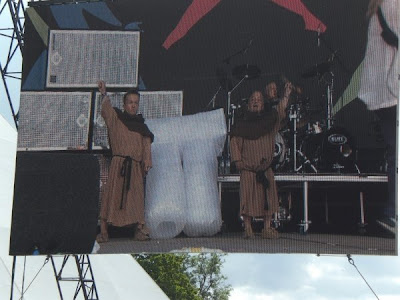 4.30pm
You certainly couldn't accuse BROKEN RECORDS of not taking things seriously. With the John Peel Tent line-up largely uninspiring this year, several of the more interesting up-and-coming types are instead appearing on the Queen's Head Stage (which has moved from the bar by the Other Stage to replace the Leftfield Stage - much to the disgruntlement of diehard Billy Bragg fans, no doubt). The Edinburgh collective have come a long way to showcase songs from debut album Until The Earth Begins To Part and, along with the likes of Bon Iver, Deerhunter, TV On The Radio and Camera Obscura, they're spearheading 4AD's current revival. Comparisons to The Arcade Fire are inevitably unfavourable - intense in controlled bursts, they recall Hope Of The States and (perhaps unsurprisingly) compatriots My Latest Novel, and the brass and cello give them an added depth, but the triumph with which the set concludes is tempered by the flashes of overearnest pretention we've had on the way.

5.30pm
Last night saw The Ting Tings declare "That's not my name" - now here's someone who spent part of his Park Stage set last year asking us "WHAT'S MY NAME? WHAT'S MY FUCKING NAME?" The answer? Dylan Kwabena Mills if you're his dear old ma, but DIZZEE RASCAL to the rest of us. He's come a long way from the days of pirate radio in Bow - once da boy in da corner, he's now da boy on da Pyramid Stage at Glastonbury, with one Mercury Prize win and another nomination behind him. His sound has migrated with him - 'Fix Up Look Sharp' has an edginess that neither of the chart-conquering rapturously received singles 'Dance Wiv Me' and 'Bonkers' do - and he and DJ Semtex unashamedly play to the crowd with a Michael Jackson tribute medley. But when it comes to showmanship and absolute command of his audience, Mills can't be beaten and this is one dizzee spell I'll not be regretting in the morning.

6.30pm
And now for something completely different: folk-rock legends CROSBY, STILLS & NASH (Pyramid Stage) don't look bonkers so much as senile. Upon closer inspection, the mystery of where Jimmy Greaves has been up to lately is revealed - he's grown his hair and is passing himself off as David Crosby, claiming his role in the trio is to "write the weird shit". There's no Crosby, Stills, Nash & Young reunion - Young's moved on to Hyde Park to perform 'A Day In The Life' with Paul McCartney - but the early evening sun is still baking hot, the beer continues to flow and the hippie vibes are channelled straight from the 60s via harmony-drenched acoustic songs that make Fleet Foxes look like mere pretenders to the throne. Somewhere to the side of the stage Michael Eavis ponders having a wank. 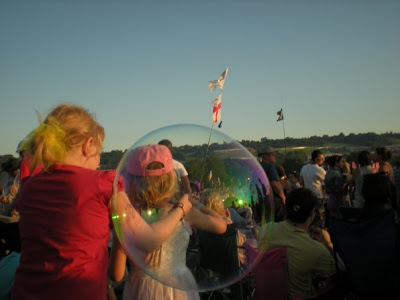 8.30pm
Once upon a time - well, four years ago - MAXIMO PARK (Other Stage) were a novelty, the first guitar band signed to celebrated electronic label Warp. Now they're no longer alone, but, in the company of !!!, Battles and Grizzly Bear and having put out successively less eccentric and leftfield records since debut A Certain Trigger, they're certainly still something of an anomaly. The degree of self-belief in mediocre material from third album Quicken The Heart like 'Questing, Not Coasting' is as baffling as Paul Smith's apparent surgical attachment to that bloody hat, but 'Grafitti','Going Missing' and splendid set-closer 'Apply Some Pressure' do at least remind me and the modest crowd of the band they were. 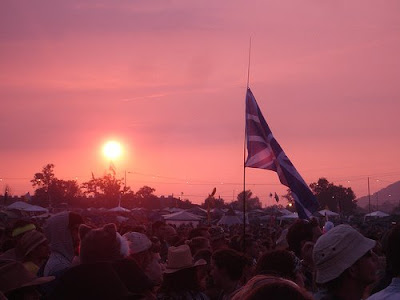 9.30pm
Is there anything worse than the sight of thousands of Kasabian fans advancing towards you, dragging their knuckles along in the dust?

10.30pm
Now, it's all very decent and thoughtful of BRUCE SPRINGSTEEN (Pyramid Stage) to spare the feelings of his Legendary E Street Band by refusing to play anything they didn't record with him, but what about us paying punters? OK, so you were 'Born To Run', Brucie, but we want to hear about WHERE you were born. Still, the set seems well received by those in the know, and through the thick lenses of my beer goggles the Boss seems quite a showman (albeit in a rather different mould to Dizzee Rascal - there are fewer threats to get "old school" for a start) and his blue-collar anthems have a subtler power than I'd imagined they might. 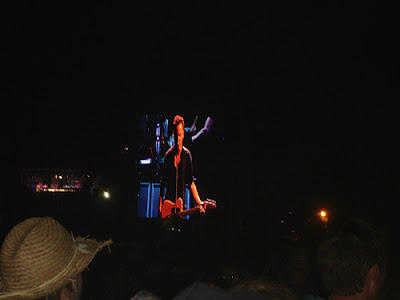 11.30pm
And so to JARVIS COCKER (John Peel Stage). Glastonbury loves him (that Pulp set from 1995 having gone down in history), and he loves Glastonbury: "I knew I was at Glastonbury when, within half an hour of arriving, I'd been served couscous by a man with a blue face". I may be paraphrasing - critical faculties are slipping away by this point. What I think I can be sure of: the material from new album Further Complications (the title an allusion to his recent divorce?) has a harder, heavier rock clout than anything he's done before. What I can be absolutely certain of: St Hubbins, Tufnel and Smalls don't join him for a cover of 'Cunts Are Still Running The World', and there's no tribute to Michael Jackson...

12.30am
Bewildered by the confetti, glitter and Nirvana outro of the 2 MANY DJS set (Dance East), I stumble to the nearest food outlet and pay £6.50 for something that doesn't really answer to the description of a burger.

2.30am
We're in the crush of Trash City again - appropriate, really, as I'm trashed and here in body only.

5am
Day has broken and still we're fighting the good fight against shut-eye, along with (it seems) half the site. Sod New York, this is the city that never sleeps.