Trust me to want to have the last word... No doubt this'll be the most belated write-up of this year's fun and frolics down on the farm - for that you'll have to blame the timing of our fortnight's holiday en France.

I can't really vouch for the quality of the text to come (just as I can't vouch for my ability to decipher what I did manage to scrawl down when I (a) remembered and (b) was still vaguely capable of putting biro to grubby A4), but I certainly can vouch for the quality of the photos - I didn't take any of my own again this year, so instead they come courtesy of a whole host of better prepared (and more sober) friends. Huge thanks to Ami, Del, Rea, Sarah, Stuart and Tim.

7.15pm
Well, this is all going rather swimmingly. I've done a full day's work and yet am already at Castle Cary. It briefly looked as though the Gods of Public Transport were intent on making mischief, delaying my first train behind another outside Cheltenham (or was it Chippenham?), but thankfully they showed some mercy, ensuring I still made my connection in Bath, even if only by a matter of seconds. Not long now before that first cider...

7.30pm
Ah. There's a queue for the coaches. A big queue - a fucking big queue, in fact. Being British, though, and being politely middle-class (this is Glastonbury, after all), this is our natural habitat and we accept the situation with more cheerfulness than grim stoicism. Apart, that is, from the bloke just in front of me: "What we need is Moses to part the way - or someone with swine flu".

8pm
Still queuing. But let's face it, things could be a lot worse. It's a beautiful, blue-skied, sunny evening; we're being entertained by a skiffle three-piece (guitar, double bass and bongos) playing covers of 'Eye Of The Tiger' and Rolling Stones songs; and we've got a long weekend at the best music festival on earth to look forward to. Yep, things could definitely be worse.

8.30pm
Still queuing. An empty bottle of Moet on the ground - someone was clearly in a prematurely celebratory mood.

9.30pm
Still queuing. A teenage girl is on her mobile telling her friend she forgot her Young Persons railcard and had to pay £150 for a new ticket. A bloke near me recounts how his rucksack ended up being driven off in a cab with four strangers from Dundee, not to be seen again. Yes, it could be worse.

10pm
The front, for real this time. It's getting dark and everyone's a little more impatient and frazzled by this point. I step on the bus (not one of the open-top tour buses that have been commandeered from Bath, sadly) and instantly my grin spreads. Definitely not long now.

10.30pm
A first glimpse of the site, the lights flickering and sparkling and shimmering across the valley in lines like an enormous runway. We're coming in to land and I can feel my pulse quicken. 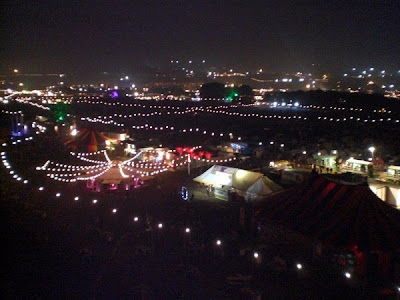 11pm
Ah, Pennard Hill, I've missed you. Home sweet home for the weekend is in a slightly different place than last year, the Tipi Field having been extended again, but the pioneering members of our group who arrived on site shortly after 10am have secured us a prime spot close to (but not TOO close to, if you know what I mean) the toilets and within easy reach of the Stone Circle and, more importantly, the Park's Stonebridge Bar. My tent having already been erected, there's nothing for it but to crack open the vino collapso - and drink straight from the box, as it happens, because I've forgotten to bring any kind of suitable receptacle.

1am
Hunger strikes, and as ever I laugh in the face of the likelihood of having to spend protracted periods in the long-drops by heading straight for the veggie Mexican stall in the Park and loading up on jalapenos. Out of the darkness bounds a friend who travelled down from Manchester with twelve others on a free coach with enough free booze for 40. That he's making any sense at all is a minor miracle.

2.30am
What's this? Everyone sloping off to bed? Oh well, go on then - it has been a long day. We're saving ourselves for tomorrow - or at least that's what we're telling ourselves.
Posted by Ben at 9:53 PM