10.30am
Ah, the bladder alarm clock, that perennial curse of the festival-goer. Time to rise, shine and micturate, then.

11.30am
It's spitting in a half-hearted, sarcastic way - can't be bothered with the effort of Proper Rain, but still intent on ensuring we get a damp start to the day. A flurry of forecasts arrive from various sources in the outside world, every one of them different.

12.15am
Out for a stroll, one of our party, a former receptionist for the BBC, stops in his tracks and stares intently at an innocuous-looking middle-aged couple in sensible all-weather gear busy putting up a poster. Turns out that back in December they were responsible for shutting down BBC Wales, by superglueing themselves to the security doors in protest at the coverage of the Israeli-Palestine conflict.

12.45pm
As far as I'm aware, there was no discussion about where to go before setting off, or any plan hatched en route as to where we might end up - but here we are, at the recently opened Pieminister stall. All roads lead here when you're hungry and there aren't any piffling distractions like bands, I guess. I briefly contemplate one of the new seasonal specials (Moo and Blue = steak and stilton) before plumping for that old favourite, Chicken of Aragon.

1.30pm
The sun decides to put in an appearance and, sated by pie and bountifully stocked with cider, beer and wine, we sit back and bask. Martin surveys the scene and declares: "I hate this place". The Cheshire cat grin on his face suggests he may not be being entirely truthful. 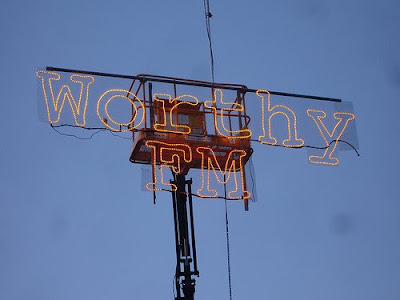 2pm
Tim, an Oxford friend and fellow Newcastle fan, turns up with his girlfriend Nicki - lured, I fancy, by the prospect of the Brothers bar rather more than depressing talk of our side's dismal fortunes. They're camped up in the family field, where it's all clean toilets and nighttime curfews. Suddenly I'm not feeling quite so old as I was when meekly retiring at 2.30 this morning.

2.45pm
A car crashed into the upper storey of a building. People wandering around with horses' heads. A wheelchair specially fitted with an array of optics. We couldn't really be anywhere else but Glastonbury, could we? Even if you're stone cold sober, I guess it must feel like a bit of a hallucinatory experience. Of course I wouldn't know for certain, never having been stone cold sober here. 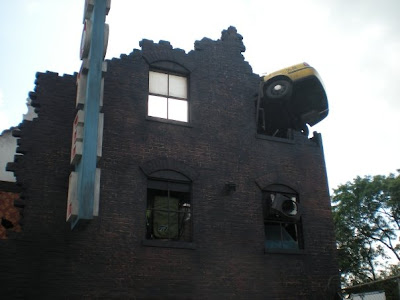 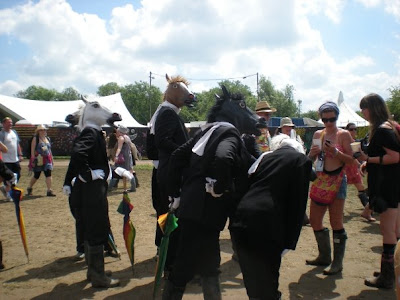 3.15pm
Up at Stone Circle, it's business as usual too. Y'know, a bloke scaling a 30ft high wooden dragon, a girl dressed as Snow White, kids doing backflips off the top of the rocks and someone picking their way between seated groups clutching a steaming chalice. 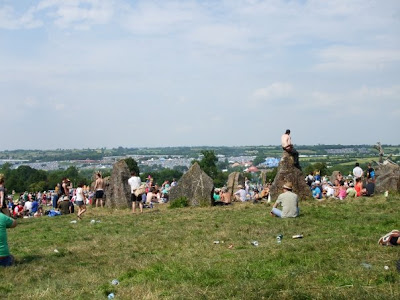 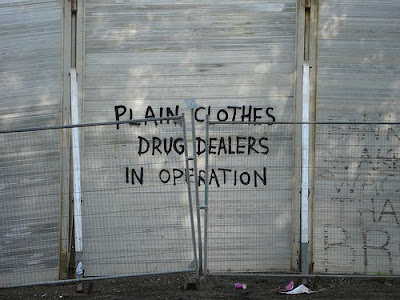 4.45pm
We may have decided against desperately trying to get within earshot of the Queens Head Stage for Maximo Park's festival-opening set, but we're facing tough challenges of our own. It may well be the onset of inebriation that's making shuttling pints back from the bar so difficult, but personally I'm blaming the scarcity of the cardboard carriers. 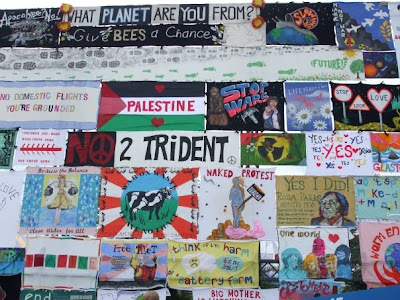 5.45pm
The subject currently under discussion is Beadle's About. How and why escapes me.

7.30pm
Here cometh the rain, overdue according to most of the forecasts but heralded in style by some impressive thunderclaps. It strikes me that Glastonbury is so very British a festival because it always allows us to indulge in our national pastime - talking and obsessing, and (let's face it) usually grumbling, about the weather.

9pm
Wow, now we're getting really deep. How's this for a philosophical quandary: "Is it possible for Pinocchio to be lying when he says 'My nose is going to get bigger'?"

10pm
Long-overdue food in the form of a falafel from a stall in the Park area, which is being watched over by enormous sand sculptures of the Eavises. 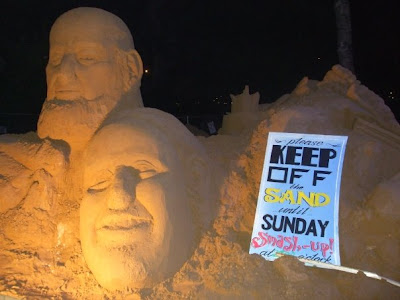 12midnight
An aimless collective wander around the Shangri-La area proves less than successful, several of our group by now too easily confused and disoriented amidst the throng to stick together but who then later insist they've been stood at the designated meeting point - an old jet fighter - all along.

1am
What's a festival without a celebrity death rumour and, we reason, surely it's our turn to kick it off. We decide to go big, and Maggie Thatcher is the unanimous verdict. One of the first people who overhears our deliberately loud talk of her demise shakes his head: "No, it's Michael Jackson". I rather think not matey, we bristle - this is OUR year, OUR turn. But then several others say it's Jackson too, and it starts to seem as though we've been beaten to the punch. Spreading the rumour so quickly and efficiently that it seems to have taken hold of much of Shangri-La already - damn this guy's good. We wind our way back to camp admiring his professionalism.
Posted by Ben at 1:55 AM