The final installment (the first is here and the second here).

(Thanks to Marky and James for the photos, and Suresh for the video.)

1pm
Oh I do love the smell of bacon in the, er, afternoon. I clamber out of bed feeling remarkably fresh, all things considered.

1.30pm
Raining - again. But it doesn't matter - the ducks are happy and this is one festival the great British summer can't ruin.

2.30pm
Quick, lock up your wives and daughters - and your booze cupboard and medicine cabinet while you're at it. For here, unfeasibly early in the day, are TIMES NEW VIKING (Centre Stage), who've crossed the sea (probably not in longboats) to blitz away any remaining cobwebs with fuzzbombs about a childhood in Columbus, Ohio (which must be a much quieter place when the trio are out of town on tour) and chemical self-indulgence. '(My Head)', vocalist/drummer Adam Elliott explains, "isn't about drugs, it's about being on drugs" - well, thanks for clearing that up... 'Natural', introduced as "a pop song" (and so it is, cast in their own scuzzy, trashy image), is even better. They finish up with Elliott inviting us all to Ohio for "a beer and some Hoagie's pizza", and I'm tempted to take him up on the offer. 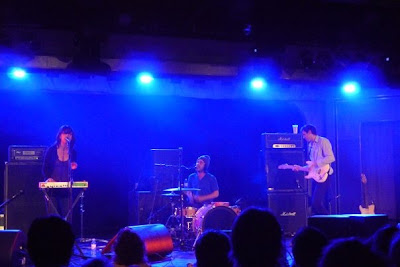 4.45pm
Last November, "disgusted with and exhausted by all of the ignorant, often racist, bullshit that came out of people's mouths during shows/interviews/conversations", The Muslims changed their name to THE SOFT PACK (Pavilion). While the San Diego-via-LA foursome's music is sadly unlikely to ever stir up as much comment and controversy as that original moniker, songs like 'Extinction' and particularly 'Parasites' nevertheless have something to recommend them - even if only as a raw, garagey, bone-shaking homage to The Modern Lovers' 'Roadrunner' and The Velvet Underground's more minimalist moments. No bitter hip-hop-style transcontinental rivalry here - this is an East Coast and West Coast love-in.

5.30pm
Sunday afternoons: traditionally a time for quiet, peaceful relaxation, unwinding after a long week and recuperating before the start of the next. Shame no one told MELT-BANANA (Centre Stage), who are clearly no respecters of tradition. Or silence. At first they play in darkness which would be complete were it not for the head torches they're wearing - as if Mike Patton-endorsed noise rock played at breakneck speed and with a peculiarly Japanese eccentricity isn't disorienting enough. After a while the stage lights come on and the torches are discarded, but there's no respite in terms of the sonic onslaught, which could, I'm sure, melt something much more solid than a mere banana. Like the venue's walls, for instance... 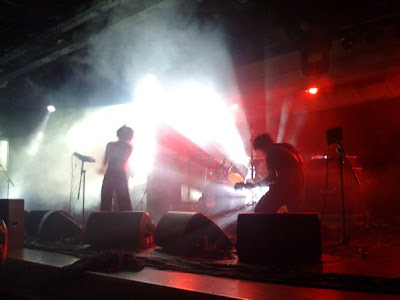 6.30pm
If there's one 2008 album that I haven't been able to stop playing in 2009, it's Microcastle by DEERHUNTER (Pavilion), an ambient psychedelic masterpiece, a headphones album par excellence, and as soon as its opening track 'Cover Me (Slowly)' begins to unfold with slow-burning majesty it's clear the live experience is going to be equally if not even more magical. It would be ludicrous to get uppity and indignant about these Kranky-affiliated Yanks coming over here and playing our shoegaze music back at us - they're not so much trying to teach our grandmotherly selves how to suck eggs as showing that, when it comes to sucking eggs, they're in a different league altogether. In amongst material from previous album Cryptograms and (I think) forthcoming EP Rainwater Cassette Exchange, 'Never Stops' stakes an early bid to steal the show, but somehow finds itself overshadowed in the final reckoning - first by the band's collaboration with the ubiquitous Deal sisters on a cover of The Amps' 'Bragging Party' (after which an overwhelmed Bradford Cox exclaims "Wow, now I can commit suicide!" in his dorkiest fanboy voice); then by the epic motorik genius of 'Nothing Ever Happened', a song Yo La Tengo would be honoured to be able to call their own; and lastly by a blazing rendition of the alternative version of 'Calvary Scars' from Microcastle's sister release Weird Era Continued. 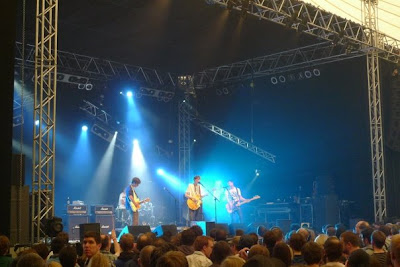 7.30pm
Man cannot live on shoegaze alone, so an expertly crafted carbonara in the chalet is the order of the day. How we're going to cope in December, in a dorm with no self-catering facilities and only Butlins food outlets to sustain us, doesn't really bear thinking about.

8.15pm
Legendary punk band of the weekend number two. My first impressions of GANG OF FOUR (Pavilion) aren't particularly good: old men (well, Jon King and Andy Gill, at least) bumbling their way through porridgey pub rock versions of supposedly venomous yet funk-influenced post-punk classics. But then King starts smashing seven shades of shite out of a mic-ed up microwave with a baseball bat (whether this is an act of political and/or sociocultural commentary or he's just a fan of good honest home cooking I'm not sure) and suddenly people under the age of 45 begin to take notice too - and we're rewarded for our attention with a closing duo of songs from Entertainment!.

8.45pm
Is it the cumulative effect of the alcohol getting to me, or am I suffering from deja vu - or are SHELLAC (Centre Stage) really not only playing the same set as they were 24 hours ago but doing so in the same clothes?! We turn up in time for enough of 'Prayer To God' and 'Elephant' to take a bit of the gloss (excuse the wholly inappropriate choice of word) off last night's show, but miss Steve Albini's aeroplane anecdote which swiftly seems to become the talk of the festival but which certainly doesn't bear repeating on a family-oriented website like this.

9.45pm
For a while, it looks as though FOALS (Pavilion) are set for an almighty fall, an unmitigated disaster of truly embarrassing proportions. Not only have they described themselves in the programme in punchably faux-pretentious terms, but from the moment they walk on stage it's clear frontman Yannis Philippakis is on another planet altogether. "We were all up late last night", he slurs, before adding in a comic voice, "chatting". Worse still, struggling to get his words out in the right order, he promises some new material that is unfinished "but it's ATP so we thought we'd wing it". Not sure how he's confused a bunch of musos for a forgiving crowd, but you can almost hear the sound of knives, pens and keyboard fingers being sharpened. And yet somehow they pull it off. Sleep deprived or otherwise, the quintet are staggeringly tight, every element of their hugely intricate math-dance-punk perfectly in sync; 'The French Open' and 'Heavy Water' are superb while 'Cassius' has wisely been dropped altogether; the new songs, far from sounding half-baked, build confidently and profitably on the material on Antidotes; and the finale - which sees Blood Red Shoes' Steve Ansell and assorted Jonquilites, Foals' fellow members of "the brotherhood of The House of Supreme Mathematics" in Oxford, join them for communal drum abuse - ensures they wind up pushing Deerhunter all the way for the title of the day's best band.

11pm
Talk about impressive credentials - the programme blurb for DISTORTION FELIX (Reds Bar) reads like a who's who of alternative rock. The trio have been compared to The Jesus & Mary Chain and Swans, have supported Fugazi and have been recorded by Steve Albini. Frontman Manny Nieto has himself recorded The Breeders, The Soft Pack and HEALTH amongst others, and bassist Juan Alderete is also in The Mars Volta. And yet it doesn't seem to add up to a great deal, and while their songs growl, grunt and glower with intent, you can't help but feel that in Shellac's hands they'd chew your face off and vomit it back down your throat.

11.30pm
More disappointment, when the Fuck Buttons DJ set in the Crazy Horse turns out to be a damp squib, neither as intense as we'd have hoped nor sufficiently danceable to suit the end-of-the-festival vibe.

12midnight
No offence to veteran punks X (Centre Stage), but I can't help feeling a little bit cheated by them, too. Like an ageing lothario who posts a portrait of himself in his twenty-something prime as his profile pic on a dating site, their picture in the programme is of a sharp, young female-fronted Television leaning insouciantly against a graffiti-covered wall. And so they no doubt were, back in the late 1970s when the Ramones inspired them to form - but thirty years on, they're a pale shadow of that band.

12.30am
So, no kitchen for the My Bloody Valentine ATP in December - best get used to what the food court has to offer. And, would you believe it, the cod and chips is actually extremely tasty, even if dripping with enough grease to give you an instant coronary at twenty paces.

1.30am
All we want is for DJ J. ROCC (Centre Stage) to play just one of the James Brown songs he keeps starting in its entirety, but instead we get MADLIB asking us repeatedly if we've heard of their mate, some chap called Jay Dilla. Some of the crowd - pasty-faced indie rock fans to a man and woman, lest we forget - whoop to disguise their ignorance, and the rest of us just feel sheepish, confused and rather out of place.

2.30am
Ah, this is more like it! The Wedding Present, MBV's 'Soon', 'There Is A Light That Never Goes Out' - no Crooked Rain, Crooked Rain track tonight (my money and hopes had been on 'Range Life'), but still the Crazy Horse disco comes up trumps. All together now: "WE ARE NORTH AMERICAN SCUM!!!"

5am
Checkout may be in five hours, but what the hell - another beer and another press of the play button for 'Surf Wax America' it is, then...

10.30am
Still drunk. We leave the site and - for the first time since getting to Minehead - head for the beach, where four of us aimlessly throw stones and our chauffeur jogs up and down the beach in an effort to freshen up.

11am
I can't say I've ever rounded off a music festival by stopping off at a local farm so friends could pick up £3.50 bunches of asparagus, but there's a first time for everything. Off comes the hoodie - we can get out of uniform, now we're heading back to the real world. More's the pity.
Posted by Ben at 7:55 PM

Sounds like the Foals' set was a nice surprise. I like their album, but they seem rather punchable.