The second installment (first one here)...

(Thanks to James and Marky for the photos and Suresh for the video.)

11am
Oooof - hangover. Still, at least there's the consolation of discovering that during the night one of our group overheard another exclaim in his sleep: "I love you, Johnny Cool!" He sheepishly explains that Johnny Cool is his nickname for himself - as if that makes it any better.

1.15pm
All attempts to feed the duck out of the window are foiled by a particularly gluttonous gull.

1.30pm
One intrepid voyager to the outside world returns to report that in the shop there's a mountain of Daily Mails and a Guardian-sized hole...

2pm
Have the Breeders been reading the IMDB page on Gap-Toothed Women, where it's suggested it "would make a perfect double feature with Steve Martin's Roxanne"? Because it's been followed by Steve Martin's The Jerk. Across the way we notice Tricky peering in the window of his chalet as though casing the joint.

4.30pm
Sometimes I absolutely hate football, and this is one of those times. My devotion to the wretches that pass for my team is such that, while regularly SWSL-endorsed grunge-pop duo BLOOD RED SHOES (Pavilion) are busy treating the crowd to some new songs, I'm sat in an awful Irish theme bar following the match by watching Sky Sports Soccer Saturday on mute. It turns out to be a disastrous afternoon, one that with hindsight effectively seals our relegation. The only small consolation? I get to enjoy the bar staff wince and cover their ears when Sonic Youth's 'Silver Rocket' is blasted out at high volume.

5pm
Now Tricky's doing kickboxing exercises with a personal trainer on a patch of grass. That's one way to prepare for your set, I guess.

6pm
God knows I'm in the mood for cheering up. Hooray, then, for a pint of Exmoor Gold and CANSEI DE SER SEXY (Pavilion) - that's CSS to you. Balloons all over the stage, characteristic giddy excitement courtesy of glittery catsuited Lovefoxx - throw in a slice of cake and it would be like being at a kids' birthday party. 'Rat Is Dead', dedicated to Rihanna, is an early highlight, but the Brazilians are at their best when extolling the virtues of simple hedonistic pleasures - namely 'Music Is My Hot, Hot Sex' and (of course) 'Let's Make Love And Listen To Death From Above'. I feel bad for Adriano Cintra, the band's drummer until bassist Ira Trevisan quit for environmental reasons - usually in a league of his own, he's been comprehensively out-moustached this weekend by his opposite number in The Bronx, Brad Magers. 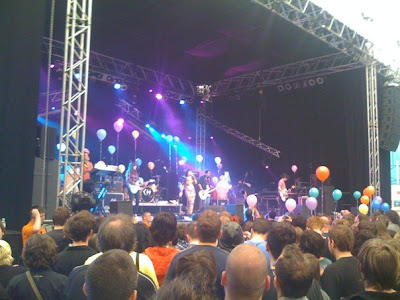 6.45pm
The first of three legendary punk bands to perform, WIRE (Centre Stage) prove to be something of an enigma, particularly for someone like me hoping for a crash course in why they're frequently held up as one of the most influential bands of the late 70s. The lithe Krautrock-influenced song they're midway through when we enter the room is staggeringly good, but there's nothing else remotely like it in the set - and while the grunt and gusto of the short, fast, aggressive blasts (from 1977 debut Pink Flag, I assume) is admirable, as well as explaining their popularity with the likes of Ian Mackaye and Henry Rollins, the broodier and slightly stodgy rock songs I could certainly take or leave. 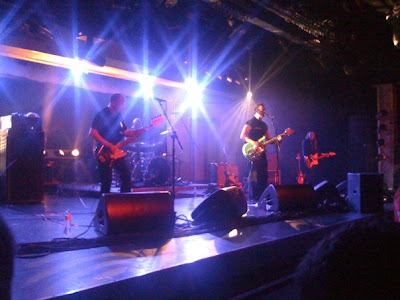 8pm
SHELLAC (Centre Stage) have played at so many ATP festivals (including the one they curated back in 2002) that they're practically part of the furniture - and indeed, when they're not performing, they're here as punters (as they were for The Jesus Lizard at ATP v The Fans the previous week). For their first set of the weekend, as always, they set up their own equipment and insist on nothing but harsh bright white light on stage before clobbering us full in the face with their precise, abrasive, minimalist bludgeon - a fusion of Steve Albini's fingernails-down-blackboard guitar (attached with his trademark waist strap), Bob Weston's subterranean bass rumble and whipcrack drumming provided by Todd Trainer, who, stick-thin and dressed all in black, looks like a character from a Tim Burton film. 'My Black Ass' and 'Dog And Pony Show' from At Action Park are satisfyingly brutal; 'Prayer To God', which ends with Albini lambasting Jesus as "a fucking bureaucrat", persuades me to give 1000 Hurtz another try; and 'Elephant', 'The End Of Radio' and set-closer 'Steady As She Goes' (definitely not to be confused with the Raconteurs song of the same name) underline just how good their last album, 2007's Excellent Italian Greyhound, really is. Of course, this being Shellac, there's humour amidst the violence - a section where they suddenly play in slow motion; Albini thanking us for tearing ourselves away from the air hockey and ten pin bowling downstairs; Weston's traditional mid-set Q&A session ("Yes, you with the beard - I know you've all got beards..."); and Albini inviting us all to their chalet for midnight poker. It's great stuff - though I feel for the half of Holy Fuck watching, who have the uneviable task of following it up later. 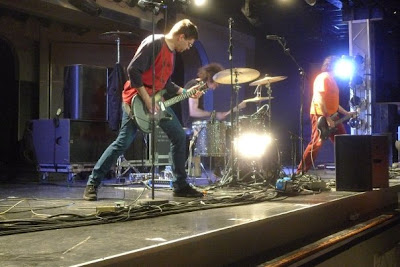 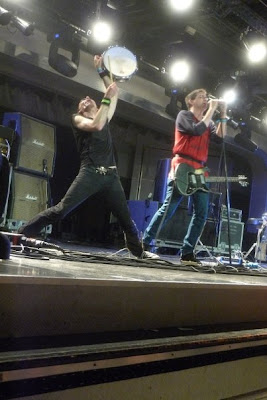 8.30pm
Overheard in the queue for the gents: "Yeah, did you see this really fucking weird documentary earlier? 'Gap-Toothed Women' it was called..."

9.30pm
And so to our gracious hosts. Steve Albini has made a point of reminding us we should be grateful to THE BREEDERS (Pavilion) for bringing together all the bands on the bill, and I am - but I'm afraid that, as with Throwing Muses and Kim Deal's other outfit The Pixies, they feel like a secret I just haven't been let into. Call me a heathen, but 'Cannonball' is all I'm bothered about hearing, and with that dispatched mid-set, I rapidly lose interest. Could you not have resurrected The Last Hard Men (featuring The Frogs' Jimmy Flemion, Smashing Pumpkins' Jimmy Chamberlain and Skid Row's Seb Bach - yes, really) for the occasion, Kelley? 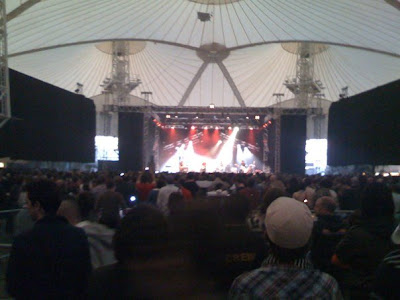 10.15pm
So, has the kickboxing paid off? If that means has it helped TRICKY (Centre Stage) work off some anger and energy, then clearly no. But if that means has it helped him work UP some anger and energy, then it's been a resounding success - the man is seriously wired, and still topless and in his trackie bottoms as though he's just swapped his trainer's pads for our ears. Whether he's introducing us to tracks from new album Knowle West Boy, pounding around to 'Black Steel' as though he and his band are possessed by the spirit of Rage Against The Machine, thumping out a drumbeat on his chest with the mic or just standing arms outstretched conducting affairs and leaving vocal duties to his slinking, shimmying ladyfriend Costanza Francavilla, you can't take your eyes off him.

11pm
Back to the chalet for my first meal since this morning's fry-up. Anything to avoid Match Of The Day, so the finale of Eurovision Song Contest and overblown Ridley Scott epic Kingdom Of Heaven it is. More entertaining by a long chalk is a friend's tale of trying to meet up with one of our party the previous night - in his drunkenness he first stumbled into a bramble bush (and has the lacerations to prove it - I'd just thought he'd taken up self-harm overnight) and then, upon extricating himself, fell up to his waist in a bog. By looking at the map, we work out that he must have been walking in the opposite direction to the one he should have been going in...

12midnight
Best T-shirt of the festival so far and, I'd wager, the whole weekend: it's a picture of a well-stuffed sandwich with the legend "SILF" underneath...

12.30am
It's The Bronx, Jim, but not as we know them - or, at least, not as we saw them last night. No, this is MARIACHI EL BRONX (Centre Stage), their mariachi side project complete with costumes and Mexican guitar. In truth, if we didn't know any better it would be difficult to tell they're a punk band at heart - vocalist Matt Caughthran shows he really can sing, and Mr Moustache aka Brad Magers actually looks more at home with a trumpet than with a bass guitar. The Deal sisters take the opportunity to hijack proceedings and perform 'Regalame Esta Noche' from the last Breeders album Mountain Battles before a beaming Caughthran returns to claim once again what an honour it's been to play and dedicate the last song to "all the cokeheads".

1.30am
It's a simple recipe, really. Take HOLY FUCK, four people who collectively could kickstart a rave in a morgue. Plonk them on the Centre Stage at half one in the morning in front of a well-oiled, goggle-eyed, seriously-up-for-it crowd hellbent on having a blast - and watch it all blow up. It's perhaps the most inspired bit of festival scheduling I've ever had the good fortune to benefit from. It matters not a jot that the set is essentially identical to the one from Oxford just over a week earlier, nor that some of the electronic gadgetry insists on playing silly buggers (and is dashed onto the stage floor in annoyance at the end of the show). The climax to 'Lovely Allen' is the moment I'll be remembering long after the festival's finished. If there's any disappointment whatsoever, it's that I've seen them before - oh to have experienced the added bliss of those who didn't know what to expect and were subsequently blown away...

3am
A quick breather back at the chalet, where crisps and Fugazi's The Argument are the order of the day...

4.45am
... before it's back out to the disco in the Crazy Horse. Amazingly, we once again time our entrance to perfection, just as the DJ's starting up 'Gold Soundz'. Which Crooked Rain, Crooked Rain track will it be tomorrow? The difference from last night, though, is that the standard just doesn't drop - over the course of the next two hours we (and a whole host of barflies including The Bronx and Steve Ansell of Blood Red Shoes) get everything from Rihanna's 'SOS', 'Heart Of Glass' and Shirley Ellis' 'The Clapping Song' to 'Anarchy In The UK', Aphex Twin's 'Windowlicker' and, right at the end, a joyous 'The Man Don't Give A Fuck' by the Super Furries. Sad to say, but 'Cannonball' sounds better in here on record than it did live earlier - and it gets a better response, too.

6am
It may have been light when we left the Crazy Horse, but there's still booze to be sunk, music to be listened to (Japandroids' Post Nothing, the one album I'm determined to buy on my return to civilisation, and they're not even performing) and chat to be chatted...
Posted by Ben at 11:16 PM

Wire are a great band, but arguably one that it's hard to like live until you're familiar with their recorded work. Verrrrrrrry familiar.

Pink Flag the best starting point, would you say?